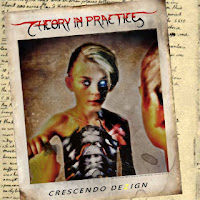 I feel like I must've been misinformed somewhere along the line, because I grabbed this album on a whim expecting some sort of prog metal based on the band name, but perusing through their entry on MA I can see these guys were extremely early purveyors of tech death in the mid/late 90s, with members past and present having stints in Mekong Delta, Isole, Ereb Altor, and Scar Symmetry.  So these dudes have been around for quite some time now and are clearly no slouches, allegedly being way ahead of their time on their initial trio of albums from 97-02 (I haven't heard these albums personally so I'm just taking hearsay at face value), so how I've never heard of them before is completely beyond me.

So this EP is their first release in fifteen years, has the band lost a step?  I'm inclined to speak with authority on a subject in which I have none and say no, they haven't.  Crescendo Dezign revels in a sort of creativity that I'm not exactly sure how to describe.  The opener, "Thermodynamic Process" opens with a bouncy modern synth line, with the rest of the band exploding around it, culminating in high speed death metal riffage with a sort of innocent tinge to it.  What I mean by that is that these guys are clearly some form of death metal, but it's not particularly dark or morbid.  The sci-fi themes that drive the lyrics must have seeped into the riffs somehow because everything is fairly upbeat and energetic, with a sense of wonder behind it instead of fathomless brutality.  While this carries throughout the five tracks on display, it's most prevalent on the opening track.  Even the chugging breakdown sounds like it's in some sort of pursuit of knowledge instead of trying to beat you into submission.  This is most evident in the soloing, which eschews atonality and instead presents several huge, soaring leads that are much more epic than they logically should be.

That creativity I was talking about manifests in the several curveballs the EP throws at you in such a short amount of time.  Like, the majority of "Journal of the Modified" is straight ahead, propulsive death metal with excellent mid range screams, while "Abstract Entities" throws in Mirrorthrone-esque clean chants, and "Cryobiological Expansion" immediately sounds like a Black Dahlia Murder song, and hey whaddaya know Trevor Strnad contributes his inimitable snarl to the track.  Even then, he utilizes a style he's pretty much never touched in his main band, striking a sort of middle ground between his hairball wretching highs and beastly lows.  The "bonus" track (I'm not entirely sure how much of a bonus it can truly claim to be since there exists no version of the release without it, to my knowledge) "Synchronized Emptiness" brings back those baritone croons and even a quick keyboard run accompanying a slick guitar part.  There are all kinds of weird touches like that that give Crescendo Dezign heaps of character that immediately make it recognizable inside of what it normally a fairly faceless scene in tech death.

Calling this "tech death", while not incorrect, feels wrong somehow.  This is melodic death metal, almost calling to mind Arsis' better moments in how ear catching they manage to make these seemingly endless complexities that they throw at you.  A more apt comparison, and the one band I can't seem to get out of my head when listening to this, is the perpetually-in-working-on-a-new-album mode Anata.  The joviality they can extract from something as inherently punishing as tech death is just as strong over here, and honestly, as a fan of Anata that has been waiting over a decade for the followup to The Conductor's Departure, I can say with confidence that this should hold you over without much issue.  I'm certainly excited to dive into the band's back catalog based on this, that's for sure.  If there's any issue with the album, it's that it doesn't seem to have much staying power.  For as professional and interesting as this is, it still manages to slip my mind from time to time despite the several spins I've given it.  Overall that's a minor quibble though, because this is some excellent stuff and I'm glad I stumbled into it.