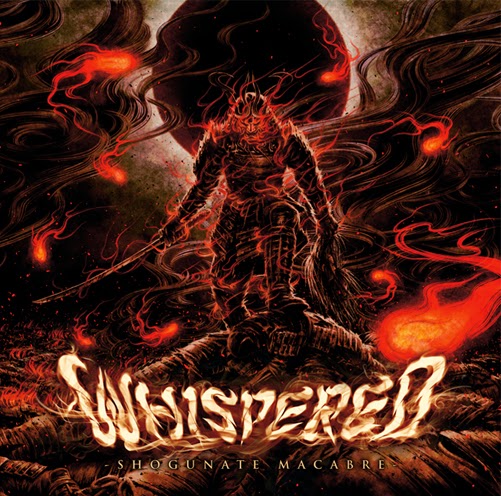 Years ago, I stumbled across Whispered.  The idea of a band taking the Children of Bodom/Ensiferum hybrid style, making it heavier, and injecting the folk influences with traditional Japanese melodies/instruments just sounds like the kind of thing that was invented with the sole purpose of appealing to my insanely specific and fringe-stupid eccentricities.  Really, how does that not sound like the most awesome thing ever?  Over the top ridiculousness, crazy soloing, and pompous bombast with an Oriental flavor?  God damn I'm getting hard just typing it out, it's so beautiful.  So of course, you can imagine my disappointment when Thousand Swords wound up being completely forgettable.  I feel like this is a style that, while not impossible to fuck up, is at least close to impossible to make boring.  There are so many untapped wells of inspiration that could be unleashed within such a concept, and yet these Finns just relied on the same tired old tropes we've been hearing for over a decade at this point.

Well now, four years later, they've finally gotten around to releasing a followup, 2014's Shogunate Macabre.  And frankly, this is exactly as awesome as I had hoped Thousand Swords was going to be.

I can't stress enough how fluently melodic and simultaneously intense the album is, abusing hyperfast blasting and frenzied shamisen runs at every turn.  Tracks like "Jikiniki", "Fallen Amaterasu", and "Unrestrained" showcase this the best, being uncontrollable bursts of energy, loaded with more hooks than your dad's tackle box.  Part of me feels like they overuse the technique where the guitars ride on an extremely fast, single note tremolo while the drums blast at sextuple time underneath haunting choirs, but they pull it off so well every single time that it happens that I really just can't fault the band for doing it so often.  It's like the slow, epic bridge in every single Gamma Ray song ever or that super slick drum pattern that Melechesh uses so frequently, it's just a nice little trademark of the band as far as I'm concerned.  Add those unrelentingly pummeling moments with oodles and oodles twangy melodies and ballistically precise melodeath/power riffs and Hatebreeder-style leads, and you've got a recipe for sublimity.

One thing that this nailed over its predecessor is doubtlessly the pacing.  Thousand Swords was spaced out with a lot of very long songs with very little happening within them, and as a whole the entire album felt bloated and unnecessary.  Shogunate Macabre fixes this by compacting the songs into much more manageable lengths, almost entirely devoid of any pointless noodling (though that still does unfortunately rear it's head at times, like the completely out-of-left-field saxophone solo in "Kappa").  The more concise structure lends itself to much more memorable songs, since the hooks are more efficiently sprinkled throughout each song instead of struggling through long periods of nothing to find them.  The way the album is organized, with three fast songs, three mid paced songs, and one more fast one before the epic closer, has a lot of potential to go horribly awry with how cut-and-separate it is, but it manages to instead keep the album flowing with a natural current.  It feels like an organic adventure as opposed to a collection of tunes (which isn't inherently good or bad, mind you).  The slower songs inject some interesting bits from time to time, like the aforementioned sax solo or the frequent clean vocals in "One Man's Burden", though I can't say the songs are improved too horribly much due to their inclusion.  I won't say they're meandering or unnecessary, just that the faster songs with huge doses of melody and ridiculously catchy leads and hooks are far more fun to listen to, is all.

Granted, I realize I'm drooling over this because I meet a very specific set of requirements for this album to have this effect on me.  I'm willing to bet most metal fans don't whack off to a soundtrack of Victory Songs and They Will Return while playing Samurai Warriors and spending the free time trying to understand Kiba's ridiculous accent in order to warble along with any given Gargoyle song.  I realize I'm a strange guy who loves the sound of Japanese traditionalism and the notoriously noob-friendly territory of melodic death/power metal like Bodom, Kalmah, Skyfire, and such.  So really, your mileage my vary, but for me, in regards to my personal eccentricities, this is the kind of album I've been silently praying for for years.  Shogunate Macabre delivered on the promise that Thousand Swords skimped on, and I couldn't be happier for that.