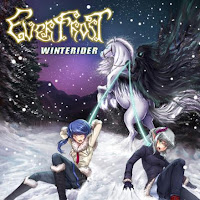 This has no god damned right...

Say it with me now: Power metal is a genre of scattered great songs instead of great albums nowadays.  I've been banging on about this for years now, but it's true.  There are a handful of flukes here and there, usually a major standout or two per year (obvious examples being Thaurorod's Coast of Gold last year and Avantasia's Ghostlights a few years prior), but for every great one there are ten to twenty lame and boring ones I've forgotten about that randomly have one insanely good track buried in there somewhere (first one that comes to mind is Theocracy's Ghost Ship, which was largely boring as hell but somehow had the fucking song of the year buried on the B side with "A Call to Arms").  So as a big fan of the genre, I can't help but approach new releases with some measure of trepidation nowadays.  So Everfrost coming across my inbox certainly piqued my interest with its unique aesthetic, but I still prepared myself for drudgery.

Imagine my shock upon discovering that this dorky ubermelodic flower fluff out of Finland is actually the most consistently excellent power metal release I've heard all year, and possibly even the best one I've heard since Ghostlights.

Winterider reminds me of many other things, but all of those other things are great for the most part.  The bulk of the music is speedy melodic power metal with tons of keys and bombast with a striking similarity to when Sonata Arctica was good.  This sounds like some hypothetical fifth album that was supposed to follow up Reckoning Night.  At the same time, there are plenty of moments where the music kicks into an even higher tempo and the guitars start shredding in a way reminiscent of Luca Turilli's glory years with Rhapsody.  Seriously, "Brandy and Antifreeze" and "Cold Night Remedy" both sound like something straight out of Dawn of Victory.  And even then there's another obvious comparison in Dynazty, which is actually excellent because this sounds like the exact kind of thing I was hoping Firesign would be.  The heavy pop hooks are actually complimented with beefy riffs and huge booming synths instead of just kinda hopping back and forth with no direction.  So you've got the overall feel of Sonata Arctica, the speed and wild soloing of Rhapsody, and the huge hooks of Dynazty, and if that doesn't sound like the exact kind of thing that was created specifically for me, then you haven't been paying attention to a word I've said over the last thirteen or so years I've been doing this.

What makes this stand out so much is the consistency of the songs themselves.  Anybody could shit out a track as good as "Winterider" or "Chainlace Angel" on accident nowadays, but to have the entire album reach that level of quality is a huge breath of fresh air for me.  There are a lot of different ideas here, from the overdramatic bombast of "Above the Treeline", to the ludicrously aggressive "Juhannus in January", to the unabashed pop hooks of "Die Young", which in fairnes is a cover of a pop song, but it fits so fucking well you'd never notice if you weren't already familiar with the Kesha original.  The tie-in to the opener on "Darkwoods Drain Backwaters" is an incredibly nice touch as well, and shows that this isn't being treated as a joke in any way, despite what many metalloids might assume based on the cover art.  This is supposed to be some sort of hybrid between a fully coherent manga and a more general concept album, featuring characters from Everfrost's first album.  I don't know if this mysterious manga actually exists anywhere but either way this is obviously something very near to the songwriters' hearts and it shows.

The only real flaws with Winterider are problems that even great albums in the genre share, those being that the ballad ("Above the Treeline") is a bit of a flop, and the closing epic ("A Whisper in a Frozen Tale") doesn't really justify its length.  Any metal band that isn't named Blind Guardian has always struggled with ballads, but it seems to be an unbreakable tradition that most melodic bands seem unwilling to move away from.  And I know it's also tradition to end albums on massive multi-part epics, but "A Whisper in a Frozen Tale" isn't one of the better ones.  Fifteen minutes is just excruciating, even when the parts themselves are all very good.  It doesn't have the narrative flow of Timeless Miracle's "The Voyage" or Rhapsody's "Heroes of the Waterfalls' Kingdom" that makes it worthwhile as a singular entity.  It's a real shame because almost everything up until that point is incredible, but if I'm being honest with you, ignoring the ballads and super long songs are how I enjoy most of the early 2000s power metal classics anyway so it's easy to overlook.

So basically what I'm saying is that this is a glorious throwback to power metal's golden age, warts and all, and I can't get enough of it.  I have no real ending to this review, so that's it.