Beneath the Massacre - Incongruous 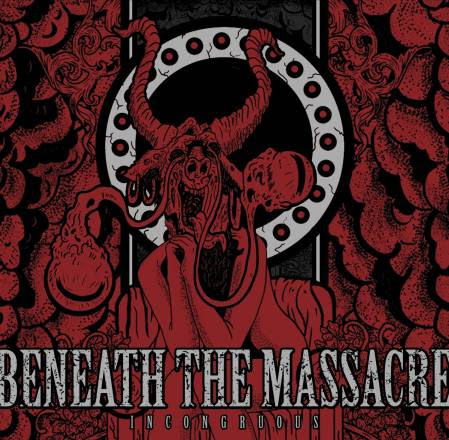 While I normally seem to focus on newer music and probably 2/3 of my digital library is post 2000, I never really seem to be one of those first voices out.  When I tackle something newer, it's typically been out for a few months and people who are interested have probably heard it already.  That's why this is kind of new territory for me, as I'm not usually the "buyer's guide" type writer.  But regardless, here I sit with the new Brain Drill album, Incongruous, one of the more anticipated releases of early 2012 within mainstream extreme metal.

Wait, did I say Brain Drill back there?  Silly me, that's an understandable mistake to make, since I put this album and Quantum Catastrophe in a playlist and shuffled the songs and couldn't determine which album was playing without cheating.  Beneath the Massacre seems to have a bit of a history under their belts, but this is my first conscious taste of the band, and all I can fucking think about are other bands this sounds like.  I don't mean to say that these Quebecois tech noodlers are ripping anybody off, not at all.  I mean that Incogruous is a safe and predictable release in a dull niche genre.  Let's get something straight, I like overproduced, salad shooter tech death.  I've given positive reviews to Origin and Decrepit Birth, Neuraxis ranked on my year end "best of" list last year, I jerk off Fleshgod Apocalypse every chance I get, I like Anata and Psycroptic and Deeds of Flesh and Severed Savior and other bands of this ilk.  Where I draw the line and start to say the style itself is flawed is when bands like Brain Drill, Rings of Saturn, and Beneath the Massacre start shitting all over the concept of songwriting and just four finger tap sweep listeners into oblivion.  Some of the aforementioned bands base their songs on meaty hyperspeed riffs, others load all the melody they can imagine into their music, and then there are the bands like this, who just throw everything they can into the music and it just ends up dull across the board.  The only band that does this well enough to get away with is probably Origin.

So basically if you read my reviews for Brain Drill or Rings of Saturn, you know what my problems are with Incongruous here.  The notion of songwriting in the traditional sense has been thrown out the window from the highest suite of the Burj Khalifa, and replaced with hundreds of warm up exercises.  I get it, y'all can play your instruments as well as anybody else, but this shit is just lame.  Show a bit of creativity somewhere, por favor.  The songs all pretty much run together apart from a few exceptions.  One is "Hopes" because it's the first time a traditional deathcore style slamdown shows up (though it could possibly be in earlier tracks, but if it does I've never noticed despite listening to this several times), and the second to last track, "Damages", for actually basing itself on a real riff as opposed to relentless blasting and fretboard wizardry.  The aforementioned riff is actually extraordinarily good too and shows that the band is indeed capable of writing something memorable, but unfortunately the rest of the album is occupied by silly noodling that goes nowhere and doesn't stick with you at all.  The vocals aren't much to sneeze at either, but unlike the other bands I compare them to, the sit in the lower register and never wander outside of their comfort zone, which is certainly a plus.

I wish there was more praise I could give this, but I just can't in good conscience.  It's weak, it's overproduced, it isn't memorable, and it just blends in to the sea of faces.  I can't describe it any better than Animal from the Muppets behind the kit, a bland vocalist, and guitarists/bassists who have spiders for hands.  It's noodly and all over the place and doesn't have any lasting impact.  I'd certainly recommend the track "Damages" because it's a legitimately really awesome track hidden away at the end of this forgettable mush, but if you're like me and can't get behind the likes of Brain Drill and Rings of Saturn, you can safely skip this.  If you love that stuff, then by all means, this is for you. 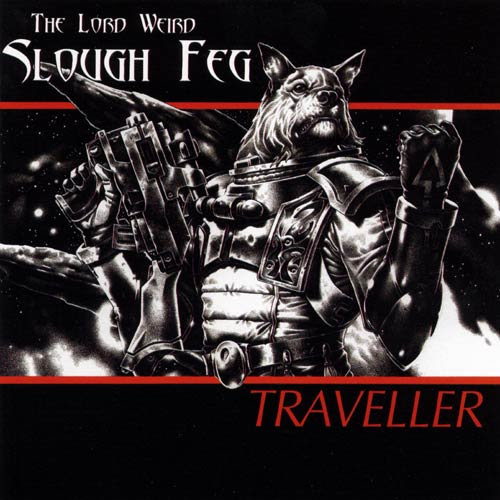 I get the feeling I'm about to get really pretentious...

About three years ago, back when I had first started doing this whole reviewing thing, I was a certified Lord Weird Slough Feg fanboy, to the point where I refused to refer to them by the shortened version of their name, despite going by simply "Slough Feg" for a few years at that point.  Throughout roughly winter of 2007 and the next several seasons, I listened to their six albums enough times to ingrain them all into my memory for the rest of eternity.  Because of that, I kind of burnt myself out on them.  Ape Uprising was met with lukewarm hype from me and Animal Spirits was released without me even noticing.  But with that said, I'd occasionally go back and listen to a few select tracks from each album, and this here, Traveller, was always my favorite to go back to, despite so many claims of Down Among the Deadmen being the best.

Those last few sentences probably seemed superfluous and unnecessary, but in reality it helps prove a certain point about this album, it is probably the most perfectly paced and well written concept album in all of heavy metal.  I always pick on Blind Guardian's perplexingly overwhelmingly adored effort, Nightfall in Middle-Earth, as the perfect way to NOT write a concept album.  NIME is horribly paced, with too much pointless filler trying to act as a vessel for the narrative, but instead breaks the flow of the music, which is what a metal album is all about, mind you.  There are a few nut shatteringly great classics there but for the most part it's overblown and horribly paced and a chore to sit through.  That is where Traveller gets it right, and what makes it such a fabulous album.  Yes, it is a concept album, but unlike so many other overblown stories and epic journeys you'll find in metal storytelling, listening to the duration of this record in one hit isn't necessary at all to get full enjoyment from it.  What I mean is, you can reach for a quickie and just blast "Asteroid Belts" or "Vargr Theme" or "Addendum Galactus" and have a grand old time without selling yourself short by not listening to the other nine songs on hand.  But with that in mind, it's still ideal to listen to the entirety of the album in one shot, as the emotion really seeps through and the story's impact hits that much harder when given context.  Everything meshes together for a great tale and still work as standalones.  That is how concept albums should work, they should be versatile, and that's what makes Traveller one of the best out there.

The album tells the story of Baltech, a space mercenary who gets caught up in a scheme to genetically alter the human race by splicing their genes with those of the Vargr, a dog-like race, in an attempt to create a perfect master race under the command of the mad Professor Rickets.  It's a pretty basic story, told in a pretty basic format, but what it lacks in creative structuring, it completely makes up for with how well written and engaging it manages to be.  This is where the pretension I mentioned earlier is really going to rear its head, because this is a story I can feel instead of just understanding.  I feel the helplessness during the final lines of "Baltech's Lament", I feel the conflicting forces of hatred and arrogance during the confrontation in "Vargr Theme/Confrontation", I feel the sense of accomplishment in "Addendum Galactus", I can feel every emotion that Mike Scalzi intended me to feel when penning this album, and that's what makes it such a smashing success.

I could prattle on forever about the superfluous merits of the record without even touching the actual meat, but I'll rein it in a bit here.  Musically, this is Slough Feg at arguably their heaviest.  There's a really poignant atmosphere throughout the album, suffocating us during the times when all hope seems lost and throwing us into a frenzy when the action ramps up.  The riffing at leadwork is probably some of the best Slough Feg have ever put to tape.  "Gene-ocide" contains some of the catchiest bits of metal recorded in the 21st century, the opening of "Addendum Galactus" also ranks up there.  It's kind of difficult for me to describe the influences at work here, as Slough Feg has always had a very unique sound, and here they managed to reinvent themselves for the fourth consecutive album.  The mindset behind this one is a bit more calculated and less organic than the previous three, while the Celtic tinge is entirely absent here, replaced with a spacey vibe to complement the story.  The sound is varied throughout the album, with high octane rockers like "High Passage/Low Passage" and "Asteroid Belts", slower, churning tracks like "Curse of Humaniti", and of course some of the signature Slough Feg bounciness and energy with "Professor's Theme" and "Gene-ocide".  There are even a few that blend two or more of the aforementioned styles to a masterful effect, like "Vargr Moon" and "Vargr Theme/Confrontation".   The use of repeating themes throughout the album really helps add to the cohesiveness and overall feel of the album as well.

If there is any negative thing I could say about Traveller, it's that the drums are produced weird so that each tom sounds like it's stuffed with dead squirrels and are indistinguishable from each other, and "Curse of Humaniti" is kind of a weak link when it comes to the staggeringly high quality of songwriting here, but those are really minor nitpicks in the grand scheme of things.  This is a journey that is completely worth embarking on, it's a fairly basic story that might be a little confusing without the booklet to explain some of the background, but the payoff is absurdly great.  I can't recommend this enough.  It's straight up heavy metal done in the way that only Slough Feg can.  It's almost impossible to describe, you have to hear it for yourself.  So quit reading my rambling bullshit and hop to it, kids.