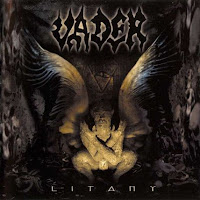 This is actually a fairly difficult album to write about.  Not because it's bland or uninteresting (far from it), but because Vader is a pretty simple and direct band on their best days and I'd argue that Litany is also their most simple and direct album.  That's a pretty weighty charge on a band that also released Black to the Blind, The Beast, and The Empire, but as of this particular moment I think I'll stand by it.  Litany is a front to back banger but boy howdy is it exactly what it says on the fuckin' tin.

Vader has basically been coasting on attitude since the beginning, because even at their best (which is top tier) they don't do a whole lot of super creative things with their template.  They start with Furious Blasting Death and then just keep doing it for varying amounts of time.  Every once in a while there are more superficially epic things thrown in like some swelling strings or choral ooohs but even then it's happening over the top of more Furious Blasting Death.  And all that is said with the caveat that none of it appears on Litany.  No, this is just Furious Blasting Death for barely a half hour and there isn't anything else I'd rather it be.  Vader is on a whole other level when it comes to packing as much fury and aggression into everything they do, and something like the title track is basically the perfect representation of this.  It's called "Litany", the lyrics are literally a litany, it cycles through the same two or three riffs for three minutes and then fucks off to let the rest of the album shine, and that's Vader in a nutshell.  They never seemed like the type of band that elbows their way to the forefront as much as they just sit back and do what they do best and people can't help but take notice.  Vader's greatest strength as a band is carrying a hefty set of testicles and then never tripping over them, instead using them as a blunt weapon to beat you into submission.

Vader was my gateway into extreme metal, and I suspect the reason they were so good for this is because they are absolute masters of the hook.  Twenty one years later I can still only think of maybe a handful of albums that toe the line between chaotic violence and fine-tuned hookiness as well as this does.  A track like "Wings" doesn't happen on its own.  The upside-down windmill-punches of the riffs and percussion complement the simple hooks in a way that had to have been achieved with black magic.  The breakdown of that particular track is quite possibly the most devastating twenty seconds ever laid to tape and somehow manages to be a rousing anthem that crowd can't help but hoarsely shout along with.  "Xeper" achieves a similar effect by dropping the guitars for a few bars in the verses, allowing the propulsive double bass to continue the momentum during catchy syncopated vocal lines.  That's a fucking pop trope, Sabaton has basically made a living off of that, and here we have Polish death metal legends pulling it off so flawlessly in a context where it absolutely has no right being effective.  I think it brilliantly showcases Vader's phenomenal handling of their instrumental talent.  These guys came up in the early days of the genre, to the point where the thrash flavorings of Kreator and Slayer are never all that far away from what they're doing, and they frequently push the tempo to absurd levels of hyperspeed, but they know when to rein it in and swap the minigun for a jackhammer.  Nobody has ever been able to truly fill Doc's shoes behind the kit, and he shows off with absolutely dizzying fills and a bass drum tone so obnoxiously boomy that my wife referred to "Wings" as "death metal techno" once.  It concusses the god damned atmosphere.  He's front and center on Litany and his percussion is absolutely the JATO unit on the back of these riffs that make the album so god damned powerful.  The laws of physics absolutely should not allow something this heavy to move this fast, it's like if Brock Lesnar was a drumstick.  You know how in Grand Theft Auto games you can achieve absolutely bonkers speed by driving a tank and constantly shooting the turret behind you? That's Litany.

Litany is not without its flaws though.  I'll frequently put this at the top of the pecking order when it comes to Vader's discography but there's really no way around the fact that the A side absolutely obliterates the B side.  "Wings", "Xeper", "Litany", and "Cold Demons" are four of Vader's all time best songs, but they're positioned as tracks 1, 3, 4, and 5.  The back half of the album is the exact kind of faceless blur that their worst albums exemplify.  I don't think it's a coincidence that all of the best songs are more mid length, and that's actually kind of bizarre considering how blistering and destructive the music is.  You'd figure lightspeed maimings would be the order of the day but they're really at their best when they're giving these tracks some time to breathe and stretch out.  There are three tracks in a row in the back half that barely break 90 seconds, and I can't help but feel like the album would've been better off if they had just been cut and the band waited an extra year to write the best songs from Revelations instead.  These songs are by no means bad but they're definitely lesser than the utter behemoths that get the album started.  They pick up enough momentum early on for those weaker songs to not really matter all that much but if you were the type to score albums via some sort of math equation then this stretch would definitely throw a wrench in things.

Thankfully, I'm not that kind of critic, and I think the weaker back end of Litany can be more or less ignored since it keeps the pace up well enough to not really hinder anything, and the rerecording of "The Final Massacre" that closes the album out is so fucking monstrous that you can easily be tricked into forgetting that "North" was even here.  This album is greater than the sum of its parts and that's mindblowing considering how great the parts are to begin with.  Blastbeats and single note tremolo riffs have never sounded so superlative.
RATING: 90%
Posted by Bastardhead at 6:43 AM 1 comment: