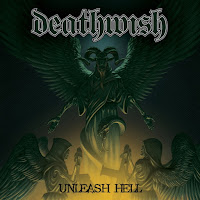 PUNCH YOUR CHILDREN, START A FIRE

FUCK YES.  I've spun this a few times over the last few days and I wound up formulating a huge, rambling essay in my head while ruminating on it at work that was supposed to dissect the inherent qualities of and the necessary balance between originality and passion, but now that I'm actually sitting here in front of my computer listening to it again I DON'T FUCKING CARE I JUST WANT TO ROCK OUT GOD FUCK YES.  There isn't one original note on Unleash Hell.  It's just Motorhead + Discharge and THAT'S APPARENTLY ALL I'VE EVER WANTED.  It's just 28 minutes of d-beats and screeching and wild soloing and really what the fuck else do you need?  I think we, as music nerds, tend to give too much credit to weird shit simply because nothing else sounds like it.  Wild inventiveness is one thing, being unique is cool, but it's not the fucking endgame.  Doofy violin shit shoehorned into metal songs gives you garbage like Ne Obliviscaris.  Fuck that noise, I don't care anymore, I'm done pretending that the only thrash band worth a damn anymore is Vektor purely because they're unique.  Nobody cares about your unique bullshit, I want to slam some beers and start a fight I'm bound to lose with gnarly bikers that outnumber me twenty to one.  Deathwish is the soundtrack to that.  LIVE FAST LIVE FOREVER.  The only thing Deathwish wants to do is have a good time, they just want to get in your face and make you bang your fucking head in a whirlwind of B.O. and puke.  That's what I want.  I want to wake up in a gutter with a few missing digits, isn't that why we all like heavy music?  This sounds passionate, this sounds dangerous, this sounds like heavy fucking metal.  Even if it isn't metal (it's really more on the punk side of the crossover dichotomy) it's got 10000% more attitude than whatever the Intellectual Metal Flavor of the Month is.  That's why Unleash Hell has rocketed up the ranking of my hypoethetical running Best of 2017 list, because it turns out that d-beats and filthy, raunchy metalpunk riffs backed by a screeching maniac who just finished four rails of coke while listening to Volcano records is more enjoyable than flittery man-bun'd dingleberries waving their Berkeley degrees in my face or classic bands desperately clinging to relevance by writing the same album over and over again to the adulation of oldnoob morons that populate the few remaining print mags.  FUCK ALL OF THEM FUCK EVERYBODY LISTEN TO DEATHWISH INSTEAD AND QUIT BEING A POMPOUS FUCKBALL.