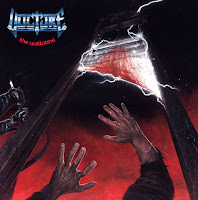 I dunno, whadda YOU wanna do?

Vulture made a lot of waves last year, but I'm just gonna skip to the punchline and say that the general metal listening public has really short term memory, because this is rethrash to the bone.  Remember when thrash had that resurgence in the late 2000s and was immediately flooded with tryhard losers who put on a thrasher costume and ripped off the same two or three bands until everybody got sick of them?  Well Vulture is exactly that.  A little better than most of them thanks to the heightened Razorisms, but still guileless, inoffensive thrash that's way to proud of itself simply for being thrash.

Thrash as a genre isn't exactly ripe for experimentation, so I tend not to hold it against bands for being unoriginal (I loved the shit out of Condor last year and they're just Aura Noir reincarnated), but I guess the reason that Vulture irks me enough to write about is because The Guillotine itself doesn't really do anything interesting within its own runtime.  You get the gist of the album with the first track and then basically hear it repeated seven more times with diminishing returns.  "Vendetta" starts off with an ominous piano/string intro, building a pretty solid sense of foreboding, before just exploding forwards with hyperspeed riffs out the wazoo, rife with ear piercing falsetto shrieks and shredding solos.  Then the following seven songs all do the exact same thing, give or take the quiet intros.  The immediate comparison I could think of was Evil Invaders, if a little bit more on the thrash than the speed metal side (but only barely) except not quite as exciting.  The wild soloing is there, but it's not quite as ferocious or over the top as their Belgian contemporaries.  The vocals are primarily made up of frenzied shrieking, but it sounds more like a calculated crutch (quite literally every single song features a double tracked "ooooooooooOOOOWYAAaAaAaAaAAAH" screech) whereas Evil Invaders sounds more like they're fronted by a dangerous lunatic who can't control or restrain himself in any way.  I don't want to keep comparing them to another modern band but it's hard when every single aspect of Vulture that could be great can be so easily improved by simply looking a few miles towards the western border.

So Vulture is a thrashier variant of classic speed metal in the vein of Razor and Exciter, so you figure the two areas where they'd absolutely excel would be speed and intensity nearly by default, and in truth they only truly succeed with half of that.  There's no doubt that The Guillotine runs along at a ridiculously high tempo, with even more midpaced sections appearing in tracks like "This Night Belongs to the Dead" cruising along at warp speed.  The problem is that there's very little beef behind the riffs.  They're all lightning quick but carry little of the inherent devastation of their meteorological point of comparison.  The riffs that make up these songs are all flashy and zip by nearly instantaneously with their enviable quickness, but there's to accompanying thunder to them.  They happen and then they're over, they're cool but have no lasting effect.  Usually with albums that have this issue, they can work to make up for a lack of riffing prowess by blowing the listener away with some other aspect, but as previously mentioned, they don't really do that either.  The soloing is quite good but sounds obligatory, if that makes sense.  The vocals are wild and crazy but land a little too close to the terrible vocals you'd find on third tier nobodies like Dismantle.  This sort of "I can't actually sing but I can snarl and do the 'Angel of Death' intro" works a little better with this more melodic style, but it can still be grating.  He does occasionally belt out a scream that sounds more frothing and insane (most notably at the very end of the album, closing out "Cry for Death") but it's not nearly often enough to keep me interested.

All in all this is an exceedingly average album with a few neat moments that spends far too much time repeating itself to really break out.  Probably my favorite intangible when it comes to metal is "danger", and there's very little that's actually dangerous about Vulture.  They're fast and... not much else.  They don't sound all that powermad or frantic or chaotic or anything, they play by the rules of their chosen genre and only add tongue waggling speed to the mix without a solid base of excellent riffs to hold the whole thing together.  So it's whatever.  I have no ending for this review.