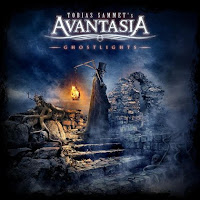 While this seems to be getting rave reviews the internet over, I have to admit it's something of a surprise to me.  Not because the album sucks and doesn't deserve it, certainly not, but mostly because the last four Avantasia albums have all put me to sleep.  Tobi has been cranking out shit that alternates between pointlessly forgettable and agonizingly annoying ever since he decided to morph into Chris Gaines and fail at being Meat Loaf, and that in itself is sort of what makes Ghostlights so remarkable.  It's still a shamelessly self indulgent explosion of melodrama and he's still taking the stage dressed like Garth Brooks' alter ego if he took Johnny Depp's role in the shitty remake of Willy Wonka, but it took him until 2016 to finally put all of his overtly stupid pieces into something stupidly brilliant.  Ghostlights is a surprising epic that lives up to its own pomp and grandeur, spanning the emotional spectrum between bombastic rock opera, weepy ballads, and back-to-basics sweeping power metal.  This shouldn't work, but for whatever reason, I'm buying it this time around.

It deserves special mention that there are really only a handful of tracks that can truly be considered "metal" in the traditional sense of the word, and the rest of the album is filled with operatic nonsense and waifish ballads, but it all works well together.  The album opens with an explosion of hammy orchestrations and booming choirs, exactly like what you'd expect to find during Meat Loaf's most cringe inducing pieces, but "Mystery of a Blood Red Rose" sets the stage nicely for the in your face bombast the rest of the record throws at you.  It's probably cliche to compare it to Meat Loaf, but it's true, that was the first thing to come to mind when I heard it, and after several spins the obvious influence has yet to dissipate.  And when that infectious blast of cheddar fades away into the twelve minute epic of metal and emotional balladry, "Let the Storm Descend Upon You", it all feels so damn natural.  Like, this is the only logical way the album could have progressed.  It didn't repetitively clobber me with dull, go-nowhere rock opera bullshit, it kept flowing in a natural pattern throughout the midpaced metal with huge choirs and sheer size of the chorus.  It's phenomenal, and the followup ballad "The Haunting" even stands on its own merits and shows itself to be a marvelously well written ballad.  The rest of the album continues to cycle through those same ideas, but it manages to be entertaining throughout.

Normally I find the ballads to be the weakest part of any given metal album, no matter how prone the band in question may be towards shoehorning them into every album.  But the reason it doesn't bother me here, whereas a band like Gamma Ray or Rhapsody of Fire drives me up the wall with this, is because Ghostlights doesn't really have a unified sonic theme apart from the soaring vocals from the impressive cast of guest vocalists.  I mean the aforementioned bands tend to focus on mellifluous vitriol and magniloquent bombast, respectively, so whenever the inevitable slow and emotional song stumbles into frame, it disrupts the flow of all the fun I was having.  Avantasia was never about either of those things, they're all about telling some story and setting a soundtrack to Tobi's crazed fantasy.  Because of this, "The Haunting", "Draconian Love", "Isle of Evermore", and "Lucifer" all feel like natural progressions in the logical flow of the album.  Hell, the only one of those that flat out sucks is "Isle of Evermore", and that's entirely because Sharon den Adel makes an appearance.  I swear to god this woman is physically incapable of lending her voice to anything that isn't a complete an utter snoozefest.  Nothing happens in this song, and it sandwiches itself between two of the best songs and ends up being the exact kind of needless diversion I was just praising the album for avoiding.

With that in mind, it makes sense that I prefer all of the more traditional power metal tracks to be found, particularly the title track, "Master of the Pendulum", "Babylon Vampyres", and "Unchain the Light".  The shit-awful "Isle of Evermore" is nestled snugly between the second and third songs in the previous sentence, and it's a complete tragedy because those two are likely my favorites to be found.  Both of them are huge numbers, with "Master of the Pendulum" being the most obviously heavy song on the album, with Marco Hietala shrieking his lungs out over the catchiest fucking chorus I've heard all year.  I've been whistling this song to myself basically nonstop since I first heard it, and you will be too.  "Babylon Vampyres" stands out as well for being one of the longest songs on the album and still finding a way to be over far too soon.  That's something the album in general is extraordinarily good at, almost every song manages to be over before you truly want it to be (barring a few obvious exceptions).  It's not that they're all full of so many great ideas that you stay entertained the entire time as much as it's just that they're all so damn well written.  The best songs are all pretty standard in the grand scheme of the genre, but they're all so catchy and fun that it's hard to fault them for not straying too far from the template.  Hell, even my vocal kryptonite, Michael Kiske, is great on the fantastically energetic "Ghostlights".  His disgustingly syrupy voice is a soaring compliment to that damn high pitched snarly thing that Sammet is so fond of.  I generally don't like either of those stylings, but here they're just two great hates that taste great together, and it's maddening.

Ghostlights is a monument, and I say that through clenched teeth and a mouthful of foot.  Avantasia has no right to be releasing an early favorite of mine for the year, but here they are.  I don't know what dumb story Tobias is trying to tell this time around (the appearance of The Watchmaker character and an obsession with time seems to tell me that it's at least in part a continuation of the previous album), but I don't care, it's a fun journey through all the grandiose styles of music he could get his hands on.  The only true duds are the painfully dull "Isle of Evermore" and the sluggish and way-too-damn-long "Seduction of Decay", but those are pretty heartily offset by the fiery epics of "Let the Storm Descend Upon You", "Master of the Pendulum", and "Babylon Vampyres", which themselves are complemented by some great ballads and some bombastic rock opera.  The last Avantasia album I cared for at all was The Metal Opera pt.II waaaaay back in 2002, and even then it was mostly on the strength of "The Seven Angels" and "Final Sacrifice", and Ghostlights basically took everything great about those two songs and spread them out across an entire album and dropped David DeFeis's stupid rasp (screw you all, he sounds like a joke on that album).  So basically this is the exact album I've been secretly wishing Avantasia would make for over a decade.