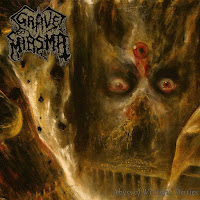 It might be easy to forget if you weren't around at the time, but back in Grave Miasma's heyday they were a Big Fuckin' Deal.  The term "caverncore" has fallen out of favor in recent years (likely because it sounds like a pejorative, though personally I use it value-neutrally) but when that style was first really blowing up about a decade ago, Grave Miasma was one of the earliest bands to really show how to do it well.  Heaps of influence from Incantation, murky production, chaotic songwriting, particular attention paid to atmosphere, all the tropes were codified in part by these guys back when the wave was beginning to swell.  Their debut full length, Odori Sepulcrorum stands as a classic in the little microgenre they occupy, so their long awaited followup, Abyss of Wrathful Deities, has been one of the most anticipated albums of the year for death metal fans.
I'm five or six listens down at this point, and what this has really done has reaffirmed my belief that Grave Miasma was always the least interesting of these early studs.  Obviously they can't sniff the socks of Incantation, but when it comes to their peers, the two they are most often compared to outshine them in every way.  Dead Congregation and Cruciamentum seem to be spiritually tied to Grave Miasma, all three of whom are examples of early bands showcasing this new breed of Incantation influence and having an agonizingly slow release schedule, but the former two are a hell of a lot better when it comes to crafting memorable experiences.  Dead Congregation throws curveballs all the god damned time, never tipping their hand as to what the next section of music is going to bring, lurching frantically between fast and slow moments and clobbering you over the head with morbid nastiness at every turn.  Cruciamentum hunkers down into vicious grooves and rides out musical anxiety attacks with razor sharp riffage cutting through the thick atmosphere.  Grave Miasma, on the other hand, is just that, a miasma.  It's thick and noxious and just kinda floats around without any real purpose.
It's a shame because obviously I really enjoy bands that are very similar to this idea, it takes very little tweaking to change an album like Abyss of Wrathful Deities into Graves of the Archangels, but those tweaks haven't been made here.  There's very little actual excitement to be found on this album.  I personally hate the argument of "it all sounds the same!" because it's almost always said by somebody who has no idea what they're even looking for, but man it's true this time.  Like, sure there are tempo shifts across and within songs but they all somehow sound like they're the same speed.  "Rogyapa" starts with an incredibly intense drum fill before flying into a screaming Kerry King style solo, but the riff underneath is just some walking tremolo patterns while the drums technically fire away with high speed double bass, but the snare and cymbals are placed very far apart in the pattern, giving the illusion that the section is moving much slower than it actually is.  This could be a neat effect but it feels so woefully misplaced when the rest of the album is actually as slow as this particular section feels.  It's rare that the tempo truly feels above mid paced, instead meandering between strolling and trotting and as a result the whole thing just drags.  It feels like it's holding itself back whenever it tries to break free.  It turns the album into a hazy slog where thirty minutes can pass by without me noticing a single interesting thing happening.
Grave Miasma is the type of band to focus on atmosphere above riffs, and while that isn't necessarily my preference, it's still totally valid and can produce some excellent shit (see the other bands I've namedropped here).  The problem is that the atmosphere on display here is very monotonous.  This is the same fuckin' problem I have with Ulcerate, we do not need 53 minutes of the same damn idea in a row.  The actual elements change of course, they aren't literally playing the same riffs in the same order at the same speed on every track, but when the effect of each song is functionally identical then they might as well be.  My old analogy about a long rollercoaster applies here as well; there may be a lot of twists and turns and starts and stops but at the end of the day you're really just doing the same loop-de-loops on the same track over and over again.  I'm always worried when every track on an album is basically the same length for this exact reason and that's the case here as well.  Of the eight non-interlude tracks, six of them are within the six minute window, while one is ten seconds short and the other ten seconds over.  They wind up playing with the same ideas with the same tempos for the same general length of time on each track and holy shit why should I be invested in that for nearly an hour?
I wish I liked this, because I adore Grave Miasma's peers and influences, but they've always managed to whiff the execution for me, and eight years after Odori Sepulcrorum I find myself up against the same problems again.  This is overwhelming in a negative way, just the same brown air languidly wafting back and forth for an extended period of time with no actual punch to direct it in any real direction.  And that's just really, really, really fucking boring.
RATING: 39%
Posted by Bastardhead at 7:53 PM No comments: 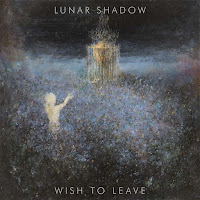