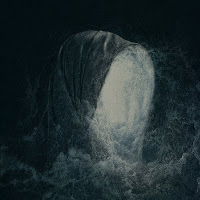 This does not eat some fucking pussy

I'm gonna skip the customary introductory history lesson here and just say flat out why Devouring Radiant Light is so disappointing.  It's not that it's a bad album, because on purely musical terms it's just fine, even pretty solidly good most of the time.  No, the problem is that it's just... not Skeletonwitch anymore.

That sounds petty, and maybe it is, but the fact of the matter is that circa 2007, not a whole lot of bands sounded like Skeletonwitch.  They were fucking furious, with an immaculate ear for melody and the ability to weave riffs that were zippy and crunchy, basing themselves in simplistic thrash while taking cues from all over the metal spectrum.  Beyond the Permafrost was special, it was so varied and so loaded with hooks and so just... unlike anything else at the time.  It was a weird beautiful album that didn't take kindly to the idea of "rules" and just became some weird haven for badassery in all of its forms.  The band was a bunch of wildmen just throwing stuff at the wall and running with whatever stuck.  But everything stuck, so they charged forward holding a wall stuck with hundreds of knives and powered forward like a jet powered Spartan phalanx.

Devouring Radiant Light is, well, not that.  This new incarnation of the band is Serious.  They focus on atmosphere and that dreaded fucking Maturity shit I hate so much.  No guys, you rule at kicking ass with relentless ferocity, nobody heard "Within My Blood" and said "oh yeah this would be way better if they got a more generic vocalist and just made plain ass USBM".

It's stupid but that really is my biggest problem with this album.  Check out tracks like "Fen of Shadows" or the title track, or most especially "The Vault".  These tracks are just... normal.  It's run of the mill USBM with none of the leftover fire the band used to carry.  These tracks are loaded with atmosphere, which in normal circumstances would be a good thing, and it's honestly not even necessarily a bad thing here either, but it's just fucking lame okay?  The band never shied away from their black metal influence, so why does this bother me so much?  Well look at it this way, albums like Forever Abomination or the test run with this new vocalist, The Apothic Gloom, were controlled drifts.  They were expert maneuvers, deftly weaving around a tight curve and exploring new territory without losing the course.  The propulsive momentum never slowed down, the band was still powering forwards with so much kinetic energy that the skidding vehicle never once seemed like it was in danger of losing control.  Those experiments worked, and they kicked just as much ass as the previous albums.  Devouring Radiant Light, on the other hand, is a total oversteer that sees the band careening into the curb and tearing off the front bumper.  These songs are content to sit in one place and meander around a handful of melodies instead of blasting forwards like the band is so good at doing.  The little ricer that zipped circles around unsuspecting headbangers is instead whirling in a demented double helix of smoke and skid marks with no clear direction beyond "wherever this inevitable wreck takes us."

The new vocals are a bit of a problem too, despite also being totally fine on the surface.  Really it all just once again comes down to the band toying with unfamiliar elements that just makes them so much less unique.  Adam Clemans is a good vocalist, but he has a much more normal black metallish rasp than the firehose-of-gravel approach that Chance Garnette had.  He was an instantly recognizable feature of the band, and his ousting (make no mistake, the original story of him bailing mid tour to deal with "personal issues" while the band heroically soldiered on as an instrumental group was hokey, he was booted out due to his alcoholism (which he has totally owned and since gotten help for) and the band spun it to paint themselves in a better light when I'm sure everybody would've understood the truth anyway) left a huge hole that they only sort of adequately filled.  Clemans sounds fine, and he works for this new direction, but that just makes it all the sadder.  It's not the same band fans fell in love with anymore, and maybe that's a dumb reason to dislike the album but come on.  Why did we have to sacrifice Skeletonwitch to get another Nachtmystium?  Exmortus sucks now and Vektor is too far up their own asses to consistently write great songs anymore, if we had to lose the last bastion of creative thrash from the late 2000s, I didn't want it to be because they just became another dime-a-dozen meloblack band.

There are, admittedly, things for old fans to like here though.  "When Paradise Fades" and "Carnium Eternal" sound straight out of Forever Abomination, with their explosive energy pounding out some absolutely fucking vicious thrashy-blacky-melodeathy-fistfuckery.  "The Luminous Sky" also goes hard as fuck and contains some of the best riffs the band ever wrote.  This is what they should have been doing, if you ask me.  This is that controlled drift I was talking about, this is the absolute chaos that was just reined in enough to have a solid foundation of meaty riffs and ferocious intensity.  If you slapped these three songs onto The Apothic Gloom, you'd have an amazing experience that showcased a new direction without totally abandoning their previous strengths.  Instead we have them coupled with "Temple of the Sun" and "Sacred Soil" and therefore stand out as the most blistering assaults on an otherwise comparatively tame album.

I hate to do the iconoclastic Boris thing here, but I just can't say in good faith that the music decency makes up for the massive disappointment with the band all but abandoning what made them so great in the first place.  If you're the type who gets pissy about the score, just pretend I gave this a 72%, because if I was totally professional and only judged this on musical merits, that's what it'd get.  But I'm not professional.  I do this shit for free as a hobby, I'm currently writing this while buck naked and waiting for a pizza to finish baking.  The Serious Critic in me knows that there's nothing exactly wrong with Devouring Radiant Light on a surface level, but the Naked Hairy Hungry Guy in me knows that I don't want to listen to this anymore.  In 2007, Skeletonwitch sounded like almost nobody, and now in 2018, Skeletonwitch sound like almost everybody.

I caught the band live a few years ago, opening for (I think?) Cannibal Corpse, and during the climactic outro of "Within My Blood", Chance addressed the crowd with "Thank you all so much for coming out!  Drink some beer, smoke some weed, and most of all..." and then switched to his raspy snarl and belted out "EAT SOME FUCKING PUSSYYYYYY!"  The band that wrote "The Vault" would never close with that.  This does not eat some fucking pussy.  I'm not even remotely surprised that this got a positive review on Pitchfork.  Fuck Maturity.