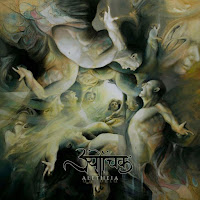 Bali of the Beast

I seem to recall a few years ago, Sutrah were one of the names tossed around the death metal scene as one of the big up-and-comers to look out for.  Dunes was a pretty big hit in the proggy tech death scene, allowing the band to be mentioned in the same breath as genre heavyweights like Beyond Creation and other newcomers invariably linked to Phil Tougas like Cheth'ilist, Zealotry, and First Fragment.  Now, in all honesty, I've never listened to Dunes so I don't really know if Aletheia is a big departure or not, but whatever it is, it's pretty solidly good.

Aletheia is just a short, four track EP that clocks in under 30 minutes, which it turns out is a pretty perfect length for this style.  Sutrah play tech death, sure, but they take a slightly more proggy and experimental approach than most of their peers.  They're more in line with the jazzy prog of Cynic or Atheist than the neoclassical shred of Necrophagist or Origin or something, with a dash of the intentionally weird and dissonant style Gorguts has been pushing for decades at this point.  You're probably surprised considering my noted dislike of Cynic and Gorguts, but I dunno, something about Sutrah just works.  Most of the time.

Y'see, this EP is structured in a pretty deliberate way, with the first two tracks being subtitled "Variations I.i" and "Variations I.ii", and the second two tracks following the same pattern except being "II.i" and "II.ii", so clearly this is meant to be a more flowing experience with both "songs" being broken up into two tracks each.  The problem with this as that both ".i" tracks tend to act as overtures/intros, and the actual metallic meat of both songs resides in the ".ii" segments.  And then with that, "II.ii" (from this point on I'll be using the tracks' given names, so in this instance: "Genèse") is over fifteen minutes long, taking up more than half of the record by itself.  Obviously it doesn't run on one theme or idea the whole time, it's a twisting journey that crawls all over the place with tons of different moods and melodies, even opening on a very creative two minutes where distorted guitars are played like violins, what with the swelling harmonies akin to a full orchestra and all.  So like... why not break this one up further since it clearly ends in a place so different to where it starts?  It's not like it would've broken the flow of the song at all since its to kinetic and interesting.  Otherwise why bother with the subtitling gimmick in the first place?  It's such a minor thing but it utterly confounds me.  Because of this I can't help but kinda brush the instrumental tracks off to the side because they feel like a needless runup to the more interesting tracks they precede.  "Lethe" and "Genèse" are both fantastic exercises in proggy brutality, but they feel hindered by tacked on appendages that add very little to the main meal itself.  Even more confusing is that "Genèse" works extremely well on its own while the first three tracks all flow into one another.  This is just a bewildering choice, and while it doesn't really affect the music itself, it just seems totally nonsensical to me.

But when they're on, they're on.  The buildups seem tacked on and superfluous, but I'd be lying if I said "Umwelt" doesn't build itself extremely well, and the explosion when "Lethe" finally starts is quite satisfactory.  "Lethe" and "Genèse" are clearly the stars of the show here, pulling a lot of influence from Lykathea Aflame.  It's not a perfect 1:1 comparison since the melodies aren't nearly as happy and major key here, but Sutrah flourishes with a very shiny production job and busily triumphant melodies interspersed with spiritual chants and flat out brutality.  The vocals are deep and monstrous while the riffs and drums pummel you with manic ferocity.  All the while the tracks twist and dive into new territory with relative (but not overwhelming) frequency, helping to mitigate the two problems this style frequently deals with (that being the songs being too samey to differentiate or jumping around so often that the beginning and ending of each track doesn't really matter).  When they give their songs a little room to breathe, they can craft some genuine magic, and I'm pretty enthralled by what they create on a track like "Genèse".  There's apparently a lot of influence from Balinese music, including instruments I've never heard of like the reyong and gangsa, but they aren't weird enough for me to really pick out in the music.  So I'll have to just accept that I'm a dummy and reduce the album down to "really good but kinda weird death metal with tons of melody".

So yeah, I'm on the Sutrah train now.  They play a style I don't usually go googoo over but I can't help but enjoy this quite a lot, the closing track in particular.  Aletheia is very proggy and highly melodic, but unlike Beyond Creation they create some wonderous soundscapes with the tools they're given, and turn what could've easily been overbusy progdeath into something very focused while also encompassing a pretty wide scope.  I dunno man, I like it a lot.