Anyway I know what you're here for, so let's just get to it.  This is!
THE TOP 13 ALBUMS OF 2021
Rules are the same as always: Full lengths only (one of these entries is disputed on whether it's an EP or LP, but the band goes with the latter so I'm counting it) and that's it.  The list tends to stay metal since that's just where my listening focuses but ya never know.  Fuckin' Foxy won last year so ya gotta stay on your toes.  Let's get on with it:
I initially had Archspire bringing up the tail on this list, but as the months rolled on I found myself more and more let down by it.  I think the reason Inoculation find themselves here instead is because this sounds like Archspire if every other note was removed.  The Canadians' signature blend of total sensory overload used to augment some sharp hooks, but they've regressed back to being all sizzle and no steak.  I'm spending half of this entry talking about a different album but that's because Inoculation is such a phenomenal respec of one of the most popular tech death bands in the world.  It turns out that by taking 20 points out of Speed and putting them into Songwriting instead you can wind up with the same basic idea but much better.  Inoculation is modern tech death with a Nocturnus sensibility and that's a surprisingly delicate line to thread. 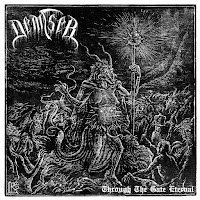 10: Demiser - Through the Gate Eternal
This is just so god damned stupid and I can't get enough of it.  Through the Gate Eternal is basically just regular old piss-n'-vinegar black/thrash and if you've heard Desaster, Aura Noir, or D666 before then you aren't going to find too many surprises, but what they lack in forward-thinking creativity they make up for in sheer fuckin' testicular fortitude.  This is over the top debauchery that is so on the nose that it rockets past farce and lands squarely on "pure fun".  I mean come on, the members gave themselves names like "Gravepisser", "Phalomancer", and the creme de la creme, "Demiser the Demiser", which also adorns the name of an appropriately silly track.  There's so much energy in a track like "Deathstrike" that I could never not adore this, even if I genuinely can't tell where the sincerity and irony actually end.
Ān: I've heard literally nobody else talk about this excellent doom record this year, and I want to highlight it for two reasons.  1) The vocalist sometimes devolves into this odd fry-whine that sounds exactly like the dude from The Vines, and 2) Despite "only" being 55 minutes long, it still feels like cutting a track or two would've done this album a world of good.  At times I really feel like we're re-entering the CD era and bands are just cramming as much content as possible into every release when almost everything I heard this year would've been better with ten minutes shaved off.  Kyning is simply a great example of what I mean when I say that sort of thing.
Eye of Purgatory - The Lighthouse: This album had no chance of making the final ranking and I'd probably rate it a 7/10 or so, I just want to highlight it because I am utterly astounded that I stumbled across a Rogga project that isn't belligerently mediocre.
DISAPPOINTMENTS
Posted by Bastardhead at 12:00 AM 1 comment: