Powerwolf - Blood of the Saints 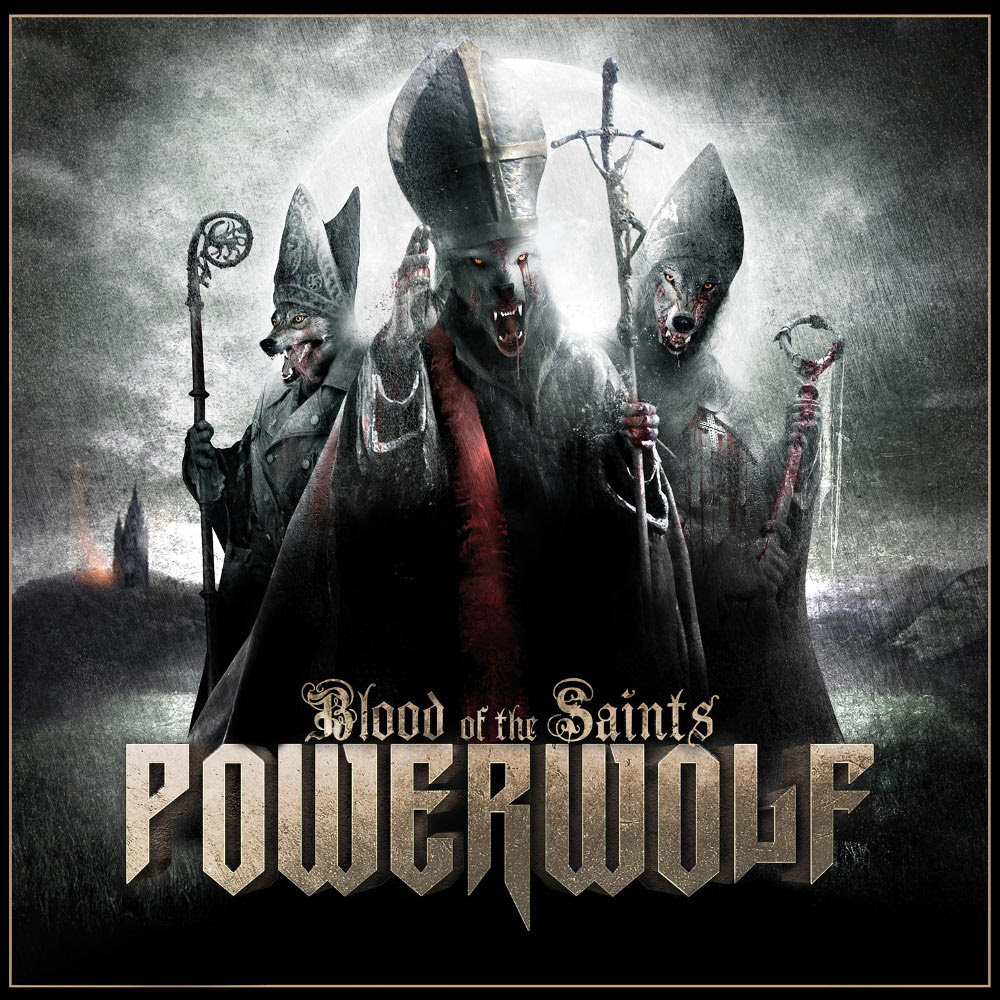 I hear their periods can attract bears...

Aesthetics can be a powerful thing.  For example, you know what you're getting yourself into when you come across an album adorned with a silly doodling of a virgin sacrifice entitled Goat Fucking Moonpocalypse, but every once in a while (if you're a clueless dork like me) you'll catch a curveball.  Apparently Powerwolf had quite a bit of buzz surrounding them thanks to their two previous efforts, Lupus Dei and Bible of the Beast, and despite my enjoyment of the over the top style of heavy metal they play, they managed to completely slip me by.  The aesthetics point comes in here because after seeing a promo photo of the band all in corpse paint and hearing their 2011 release was titled Blood of the Saints, Running Wild-esque German speed metal was about the furthest thing from my mind.  And maybe my initial surprise is one of the reasons I'm so nice to this album, but I'd like to think its merits speak for themselves.

First off, Attila Dorn is a beast of a vocalist.  In all honesty, the sheer depth and power of his voice is the main draw of the band to me, not the silly image or huge riffs.  Most of the tracks feature a choir effect of his voice, which works fantastically well with the big latin choruses and orchestration.  Even when his voice is going it solo, it commands a fierce presence around it and really takes center stage.  Unfortunately the lyrics are pretty silly for the most part.  This gothic horror image they shoot for gets props from me for at least being different in terms of heavy/power metal bands, but the lyrics themselves are usually incredibly blunt and ridiculous sounding.  The dearth of complexity on that front really gets hammered into your head when the voice shouting these things is so powerful.  It also doesn't help that he, like so many other German bands, I've noticed, can't seem to pronounce many simple English words properly.  Therefore his thick accent just makes the already silly lyrics even more amusing.

After falling in love with this album, I went and gave their back catalogue a look-see, and I can see that this band doesn't do a whole lot in the way of evolution.  This is essentially a bizarro Bible of the Beast, as both albums are arranged in the same way, with similar songs placed in similar spots of the album.  Opening with the booming latin chorus, ending with the slower hymn, it's just all there two years prior, thus making Blood of the Saints kind of a redundant release.  That said, it's still damn awesome.  There are a few double bass filled speed metal numbers like "All We Need is Blood" and "Dead Boys Don't Cry", heavy hitting heavy metal anthems like "We Drink Your Blood" and "Son of a Wolf", some downtempo numbers like "Die, Die, Crucified" and "Ira Sancti (When the Saints are Going Wild)", and even a few that really channel the best metal band to walk the earth, Running Wild, with "Phantom of the Funeral" and "Sanctified with Dynamite", the latter song trailing only "St. Satan's Day" from the previous album for the title of Powerwolf's best song.  Each song has a huge, fist pumping, singalong chorus and it's hard not to get swept up into the grandeur that the band commands.  Yes, it's hard to deny the goofiness, but it's taken so seriously that I just can't help but buy in to it.  The theatrics take center stage and the music provides a fine conductor for the spectacle.

Have you ever seen Rocky IV?  It's the most ridiculous, overblown, corny, goofy movie I've seen in pretty much all of my years of existence, but goddamn isn't it awesome?!  This is exactly how I feel about Powerwolf, they play a pompous and over the top style of heavy metal that's really more about flair than substance, but it's just plain awesome.  This is fun, and sometimes that's really all I need to be satisfied.  Yeah, Ulcerate is pretty great and Immolation rocks my socks and all, but neither of those bands are particularly fun to listen to.  I can pop this album in at any moment barring a funeral, and it will surely be a hit with me.  It's good, mindless, fist pumping fun and I can't think of any other way I'd rather have it.  Sure the album is flawed in the sense that long term fans won't find much new and it really loses steam at the end barring the middle section of "Ira Sancti", but everything is really well written and does its job perfectly.  The best tracks are probably "Sanctified with Dynamite", "We Drink Your Blood", and "Phantom of the Funeral", but I don't say you could really go wrong with anything other than maybe "Die, Die, Crucifed".