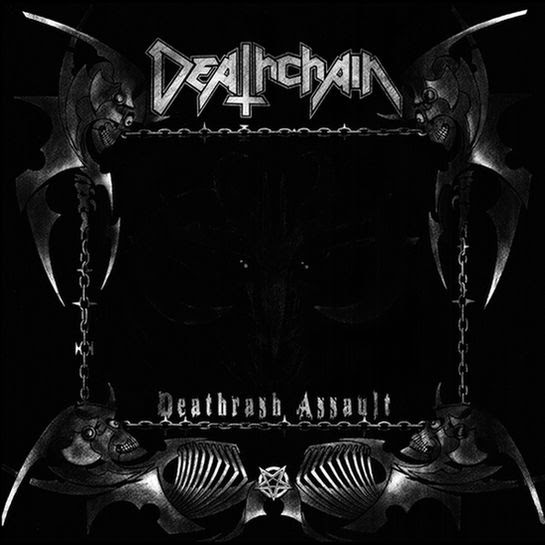 There's a track called "Napalm Satan", that's all you need to know

I imagine that my first encounter with this album is similar to most death/thrash fans' first encounter.  "Deathchain?  Well that's a fucking awesome name.  What's the name of the album?  Deathrash Assault?  Hmmm, reminds me of Deathrace King.  What's that?  The album cover is a simple black and grey affair like the Crown album I thought of?  Great, we've got a clone on our hands here".  And upon first listen, that's exactly what I thought.  Looks like The Crown, sounds like The Crown, it must be a duck.  So I shelved this as another entertaining but ultimately hollow recreation of a greater band.

Years passed, and a chain of events lead me to dust this off and give it another run.  I don't know why, but absence truly does seem to make the heart grow fonder, because this is not the imitation that I remember it being.  What were once stock riffs have become aggressive monsters, what were once forgettable vocals have become versatile and malicious, and what were once forgettable Crown rip offs have become intense Deathchain rippers.  Not sure why, this is the same album, but it just doesn't have the ability to grab a listener upon first listen.  It takes some resilience to keep coming back to it I suppose, but once this thing latches, it doesn't let go.  And yes, my initial criticism does still ring true, this sounds like the Swedish speed junkies I love so much, complete with their trademark addiction to insane tempos and over the top lyrics.  That said, this connection is far from a bad thing here, as it doesn't sound like they're stealing a great idea as much as they just happened to have another great idea that happens to be similar to one that was already proven to work.

As I mentioned in the title, Deathrash Assault was predestined to kick ass before it was even released.  The reason for this is simply for this; there is a track entitled "Napalm Satan".  Read that again, say it out loud.  "Napalm Satan".  I dare you, I fucking dare you to come up with a better song, album, or band name than that.  Napalm.  Satan.  I love that name more than my hypothetical first born midget kid.  I thought Fleshgod Apocalypse or "Blitzkrieg Witchcraft" were gonna be hard to beat, but this is an entirely different level of awesome, kids.  Just saying it out loud puts an extra strand of hair on your chest.  There is not a single combination of two words that are more manly, more metal, more brutal, more insane, more anything than Napalm Satan.  I'm calling it right now, I'm calling dibs on Napalm Satan for the name of my band.  I'm actually willing to go as far as to say that, based on their first two records, Deathchain is the undisputed champion of two word song titles.  "Graveyard Witchery", "Chaos Wartech", "Venom Preacher", "Deathrash Legions", "Panzer Holocaust", "Rabid Vultures", there is no way that any of these songs could suck.  Deathchain have nailed the badass aesthetics of metal that we all love so much absolutely perfectly, these guys fly over the top and don't even think about looking back.  This is honestly comparable to Rocky IV.  The aesthetics are so over the top in their silliness yet at the same time meant to be taken 100% seriously, yet it's done so damn convincingly that it's hard not to like it.  Bands like White Wizzard make you roll your eyes, bands like Deathchain make you fucking thrash.

Now I'm well aware that I just spent an entire paragraph rambling about how great the mere titles of the songs are, so one is probably wondering when I'll get to the point and explain whether or not the tracks behind the titles are equally awesome.  Honestly, these songs could be titled "Tea Party in Fairyland" or "Dirk Schlacter Sleepover" and they'd still absolutely fucking slay.  The only time the tempo goes below blistering is during "Panzer Holocaust" in favor of a bizarrely bouncy chugging pattern for the verses, complete with equally bouncy vocal patterns, and during the haunting bridge of "Valley of the Corpses".  Despite these sections deviating from the overall theme of speed, intensity, and speed (with a little bit of speed thrown in for good measure), they are actually welcome breathers as opposed to confusing flow breakers.  I believe the reasons these breaks are made aren't actually because the band wanted them to be there for songwriting purposes, but instead because no fans would survive to the end of the record without them.  Deathrash Assault never lets up, and this is the record's main strength since this shit is practically unstoppable when firing on all cylinders.  The first seven tracks are all absolute modern death/thrash classics as far as I'm concerned, and six out of those seven run at an average pace of 8675309 bpm.  I hate to keep comparing this band to The Crown, but I have to point out that they have not only managed to play a similar style with equal ferocity, but they were even able to replicate the ability to make their songs catchy as hell.  There are a lot of gang shouts utilized throughout the record, which is kind of strange with harsh vocals but it makes certain sections of the music stand out.  Check out the choruses to "Venom Preacher" or "Graveyard Witchery", or the bridge of "Deathrash Legions" and tell me that the thrash trope doesn't work better here than most pure thrash bands could ever hope to make it work.  This could also be due in part to Rotten's incredibly versatile vocals, ranging from deep death growls to the Schmier-esque rasp that he seems to favor.  He does occasionally tend to drift into a range that makes him sound a lot like Colony era Anders Friden, which typically isn't the best sound, but he manages to make it fit with the thrashing intensity that dominates the record.

Death/thrash fans who haven't heard this are definitely missing out.  From what I've been able to gather, the band has taken a turn for the more death metal side of things since Rotten left after this album, and it seems many fans aren't satisfied.  While I haven't heard anything post-2005, I can understand why fans could be disappointed, as the high octane thrash is definitely the band's forte if Deathrash Assault is anything to go by.  If there's anything wrong with this album, it's that "Morbid Mayhem" is a bit of a filler track and the album as a whole doesn't seem to click instantly, and therefore you may run the risk of not getting caught up initially.  Maybe I'm just a retard though, as everything his is as catchy as it is brutal, so who knows?  Either way, definitely check this out, and be sure to start every morning with a healthy dose of "Napalm Satan".