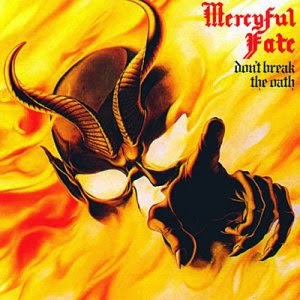 This... this is it?  Really?  THIS is the big genre defining classic that helped solidify 1984 as the seminal year for heavy metal?  I'm sorry guys, Don't Break the Oath is a god damned travesty, with literally not one single redeeming factor to warrant this legendary status it carries, and I'm actually blown away that it even attained this status in the first place, even when putting it in context of the year it was released.

First off, what the FUCK are y'all talking about calling this evil and atmospheric?  How could something this dorky and cheesy possibly be considered dark or evil?  I mean seriously, listen to those vocals.  Queen Diamond is quite literally the worst vocalist I've ever heard in all my years of metal fandom.  How can you invoke Satan when you sound like a four year old trying to sing the Van Halen songs you've heard your dad listening to?  Really, Lucifer would probably respond to his calls with flame-spitting laughter before squashing this little fairy under his hoof.  I mean really, the stupid "A-AH! A-AH! A-EE-A-OO-A-AH!" part in the middle of "The Oath" is so fucking silly.  Who takes this shit seriously?  How is that dark?  How can you hear a prepubescent castrato tunelessly wail his way through a bridge like that and think "Oh yeah, this is where true blasphemy happens!".  This is about as blasphemous as The Wiggles.  With happy, galloping drums and vibrant, melodic riffing, it's pretty much the exact opposite of "dark".  And even after all these listens, I don't know what "atmosphere" people are talking about.  Are y'all confusing "atmosphere" with "reverb"?  Because that's all this album is.  Weak, thin guitars drenched in reverb, farting out airy riffs that mean nothing.

The production in general is absolute ass, come to think of it.  This could be handwaved away as a product of the times, but let's face it, 80s metal production sucks.  The point of music is to HEAR it, not strain through fucked up mixes in hopes of differentiating the guitar from the white noise.  And don't tell me that the equipment wasn't as good as it is now, you can't fool me.  People still play guitars that were made in the 60s nowadays and they can sound beefy as hell.  Listen to Oceano or Whitechapel, for instance.  Those bands CRUSH, Mercyful Fate here just wisps along in the dead air, unable to stir anything thicker than hydrogen.  I hesitate to even call this metal, to be honest.  I mean yeah, there's riffs and they sing about Satan, but a band like Suicide Silence can touch on an actual topic like nihilistic pessimism and just pound skulls into dust while doing it.  Mercyful Fate flitters around gay melodies while crying about being buttraped by Leviathan.  The sound does the anti-riffs no favors.

Now let's not go thinking I'm a deathcore loving swoopy haired scene fag, I DO love real metal.  Bands like All That Remains can play melody and still be badass while Slipknot can take pure, unrelenting hatred and set it against a cacophony so genuine and heartfelt that the anger takes over the listener vicariously.  One time while listening to All Hope is Gone, I got so pissed that I punched my dog!  Mercyful Fate and Don't Break the Oath don't make me want to do any of that.  Hell if anything this album makes me want to shove myself in a locker.  Dorks who wear makeup and screech the highest notes they can like this deserve no less of a Fate (LOL!).

Basically this album is fat and gay and nothing cool ever happens.  "Gypsy" has the most embarrassing vocal performance I've ever heard, and that's including Damien Storm and Keydragon.  People go on and on about these riffs but they're just so melodic and fruity that I can't take them seriously.  And really, not ONE heavy as fuck breakdown or chug to be found anywhere!  I'm not saying an album needs to be full of slams to be good, but it certainly helps!  This is the exact opposite of evil, and really doesn't even deserve the plastic it's pressed on.  Who buys vinyls anyway?  Dads and hipsters, that's who.  Mercyful Fate is for dads and hipsters.