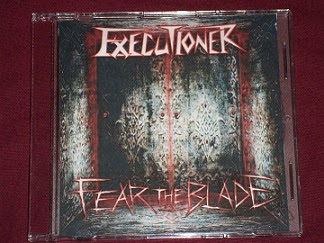 As a short, three track, 15 minute demo, there's only so much I can say about Fear the Blade before I begin repeating myself endlessly, so this'll be a short one.  Basically what this boils down to is "ultra green thrash".  The two original tracks here are full of energy and the band clearly has boundless enthusiasm for the style of music they play, but the issue here is that is just sounds really amateurish.  I'm not going to knock this for the lo-fi production or weak guitar tone, because I understand that this is the best the band could do on their presumed budget, but the songs themselves just reek of a bunch of new metalheads with only a year or so of experience on their instruments.  The first band I ever formed never even had a name, it was just me and two buddies, I was thirteen and they were both fifteen.  We wrote one song front to back and apart from one train wreck of a cover gig at a Halloween party, never played any gigs.  The songs we were writing at that time sounded a lot like what Executioner here has given us with this demo.  We weren't very good songwriters at all, but we really wanted to be a part of the metal scene, we wanted to make a name for ourselves while paying tribute to our heroes.  As such, many of the riffs I wrote were highly reminiscent of Kill 'em All or Seasons in the Abyss.  I couldn't write a bass line more interesting than just following the guitar, the guitarist didn't understand key signatures and thus couldn't write a good melody if he tried, the drummer couldn't play double bass cleanly for very long so he stuck with simple back beats like Lars Ulrich would.  We were kids, amateurs, young fans of metal who wanted to make our own despite lacking the skills to make anything with lasting impact.

Executioner here aren't quite kids, but their songwriting skills definitely need to take one hell of a spike before they contribute anything with lasting appeal.  One thing I must compliment right off the bat are the vocals, as Nathaniel Vowell sports a manic, crazed voice that just fits the style of thrash metal perfectly.  He's a manic frontman, with a crazed, harsh rasp that gives one the image of him on stage, purple faced, shouting his lungs out while blood squirts out of his eyes.  It's just unfortunate that such an unrestrained vocal performance is backed by relatively tame instrumentals.  I do like the songs presented here, as there's an inimitable charm in their simplicity, but with both of them boasting above average lengths (both are six minutes or above) they do tend to get a bit dull.  "Tomb of the Pharaoh" is the better of the two, riding off a cool middle-eastern motif with an interesting extended solo section, but for the most part it's pretty sloppy in the chorus and repeats itself a bit too much.  "Last Stand" is decent as well, but the riffs lack the aggression necessary for this style.  Both tracks predominately feature the really early style of thrash riffing ala Kill 'em All or Show No Mercy when they were still a blend of NWOBHM and punk, before the thrash riff was it's own defined thing, and that's something I actually appreciate.  I find it more interesting to try and go back to the roots of what made the genre a thing in the first place as opposed to taking influence solely from established acts from the mid 80s.  That said, the third track featured here is a cover from one of the albums I just mentioned, the early Slayer classic, "Black Magic".  The cover is honestly probably the best part of the album, as Nathaniel does a pretty killer Tom Araya voice and apart from what sound like a couple missed cues from the drummer, it's certainly a double whammy of both the most well written song plus the best performance.  The old film adage of "Never reference a better movie in the middle of your movie" doesn't quite apply here, as while it does highlight the songwriting shortcomings of the two original tracks, it also shows what the band is capable of when their writing matures a bit.  When the riffs get more interesting in the future, this band will do some great things.