QUICK HITS: King Woman - Created in the Image of Suffering 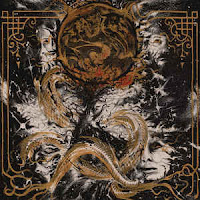 I'm not gonna call this Pallbearer style of "doomgaze" or whatever a plague on metal or a Trojan horse for lame hipsters who don't give a damn about the genre or anything, because if I don't like something it's pretty easy to simply not listen to it and I don't really care if people like things that I don't, but I will say with authority that this Pitchfork-approved go-nowhere nonsense is almost invariably terrible, and King Woman does nothing to dispel that prejudice.  I got this admittedly entirely on a whim because the cover art was super cool, but that's really all the band has going for it.  None of these riffs are compelling, the whole thing just drags and plods along with no sense of urgency, wonder, malice, mystery, or anything that doom needs to work.  This is all just... there.  There's apparently an interesting tale about how this band came about, with the vocalist leaving a shoegaze band and starting this metal band to lash back at the religious institutions of her youth, but if there's any true lingering hatred and frustration behind the band it is wholly drowned out by plodding riffs that elicit precisely zero emotion and some of the most lethargic, tranquilized vocals I've ever heard.  You know that (beautiful) meme where people find all the most absurd and surreal ways to remix "All Star" by Smash Mouth?  Well one of the best ones is where somebody remixes every note to be C.  Every vocal line, every chord, every bassline, it's all just this one continuous streak of the same monotone shit and it sounds like the audial representation of an anxiety attack.  That's what Created in the Image of Suffering reminds me of.  Kristina Esfandiari is just a flat out terrible vocalist.  She sounds like she's trying to record vocals in her bedroom without waking up her parents.  This kind of dreamy monotone can work for something more apocalyptic and creepy like Chelsea Wolfe, but this isn't that.  It just sounds like a really lame practice session for a bunch of kids, none of whom are any good at their instruments, and the person doing vocals doesn't actually have any real singing talent so she just drowns herself in reverb and hopes that covers it all up.  If you forced me to say something nice, I'd say "Utopia" has a pretty cool riff hidden under what I think is supposed to be the chorus, but it's insanely overshadowed by the insultingly bad vocals and multitude of weak ass riffs with pointless shoegazey clean guitars layered over them.  I'm willing to bet anything that this has a great rating on Pitchfork. 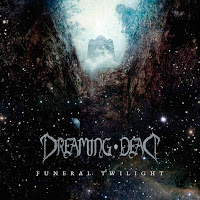 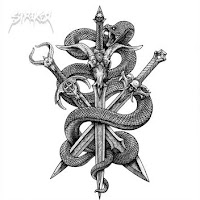 Longtime readers of mine may remember that Striker actually released the very first album to win my official Album of the Year award back in 2010 (with Eyes in the Night, which still holds up and absolutely fucking rules), but my relationship with them has been sorta weird ever since then.  I always compare them to Enforcer since they came out around roughly the same time and helped spearhead this trad metal revival in the late 00s/early 10s, but Enforcer has been slugging home run after home run whereas Striker only managed one more total classic (City of Gold) and two other decent albums that didn't stick with me (Armed to the Teeth and Stand in the Fire).  Barely a year after the latter album, they're back already with a shorter, more streamlined self titled album, and I've gotta say they're keeping with the "good album - meh album" flip flopping, because this one is awesome.  Excluding the bonus track and the short interlude, there are only eight tracks here compared to the previous album's eleven, and it works to their advantage because they've always been a shallow band of surface flash (which obviously doesn't bother me, there's a reason I listen to fifty generic speed metal bands for every one complex prog band) so it doesn't overstay its welcome.  At just a little over a half hour long, this is a great blast of energy, blazing leads, and some of the heaviest riffing they've ever managed.  Seriously, tracks like "Over the Top", "Curse of the Dead", and "Pass Me By" just utterly decimate any of their previous songs in terms of ferocity.  There are some more traditional rockers like "Rock the Night" but those quick and heavy cookers are the true standouts of the album.  Special mention has to be made for "Born to Lose" as well for being one of their best tracks yet.  It's not as speedy and vicious as something like "Pass Me By" but it's certainly one of the catchiest tracks they've penned yet.  It's not their strongest album, and I'd say it's probably right smack in the middle of their five albums, but that has more to do with how phenomenal the good albums are and how sharp the dropoff is for their more mediocre ones.  Give it a go, it certainly rocks more than it has any right to.