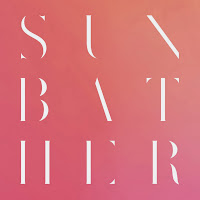 Maybe life is like a ride on the freeway?

I'm gonna do something a little different here, an experiment if you will, so bear with me.  Deafheaven is a band that's been generating a lot of fuzz.  Neckbeards around the world have been ovulating with excitement over this new "different black metal" band since the hype of Liturgy and their unbearably inane frontman seem to have fallen by the wayside in recent months.  Places like Pitchfork and probably Anthony Fantano (I haven't looked yet, but I can guarantee he's reviewed and loves this album) have just been drooljizzing all over the place since the release of Sunbather in the middle of June this year.  Now, this will be an experimental review for me for a few reasons.  1) Hipstery post-black metal is entirely out of my element.  I like post rock and I like black metal but I rarely seem to fall in love when the two are blended (notable exception for Altar of Plagues' first album), and 2) This is clearly the kind of album you need to sit down and lose yourself in.  "Experience" more than "listen to", something with many layers that you can tune in and drop out to, ya know?  Well I'm not doing that.  Nope, I listened to this once about a half hour ago and now I'm reviewing it.  Consider this different because it's a first impression from an outsider.

You see, most reviewers I know and trust have been pretty lukewarm about this album, whereas others with taste I rarely mesh with and unknown noobs and noted hipsters and whatnot have just been showering this with praise.  This usually indicates that the album's content and quality is probably more in line with the minority I trust, but here I actually think I'm gonna have to side with the jizzlobbers, though not nearly as fervently.  I don't find Sunbather to be any sort of world changing effort, nor do I foresee this ranking on my year-end list, but I do find it highly enjoyable, and even when this experiment is done I can easily see myself spinning it more often.

I'm not going to pretend that I'm entirely well versed in this style.  I mean, I'd like to think that I'm pretty kvlt with my post rock tastes (Godspeed You! Black Emperor is good in theory and atmosphere but sloppy in execution, Gifts from Enola is sheer brilliance, God is an Astronaut are basically a pop band but I love them to death anyway, and then I can namedrop a bunch of horridly obscure bands that I adore like Yndi Halda, Foxhole, you.will.die.in.the.desert, Up+C Down+C Left+C Right+C ABC+Start (I swear to God they're way better than their name implies), The Samuel Jackson Five, Six Parts Seven, et cetera), but most of the bands Deafheaven are compared to are bands I have little to no experience with.  I haven't heard a single note of Alcest's music,  I know who Liturgy and Weakling are but I've never actually listened to their music, Wolves in the Throne Room are pretty rad I suppose, and Skagos is okay, but I haven't heard Fen or Lantlos or anything like that.  Basically the entire atmospheric-post-black-shoegaze-cascadian-whateverthefuck scene is entirely foreign to me, and so I have no preconceived notions on Deafheaven or Sunbather, nor do I think they're diametrically opposed to black metal for simply trying to be pretty and not singing about Satan buttraping virgin ibex.

"But what do they sing about instead?", you may find yourself asking.  The answer is simple: mundaneness.  Of course the band has some really esoteric sounding explanation but it really boils down to "inane shit".  I suppose they're trying to be poetic or something but there are only so many ways you can screech about ogling topless women from afar before you're forced to throw up your hands and just admit that there's no higher art here and move on with your life.  Luckily the lyrics are as inconsequential as they are stupid, because the music itself is very evocative and romantic, along with a sense of psyched out urgency, remorseful interludes, and frenzied blasting atop very soothing melodies.  I feel like whatever the band was trying to achieve here, they nailed.  I'm sure there are much better things hidden in the underground within the style based on how many casual fans are blown away by this record and how many well acquainted with the style are underwhelmed, but dammit I'd be lying if I said this wasn't a very strong, emotional sounding album that can't help but make one hell of a connection to the listener.  Maybe it's because it's so accessible (who am I kidding? Of course that's why) that it's been so successful, but I have to hand it to the band, after merely one listen the entire experience stuck with me.  I remembered the weird, hypnotic pulsing of "Vertigo" and the soothing melodies of "The Pecan Tree", I remembered the spoken word sermon in "Windows" and the major melodies permeating throughout "Dream House".  I can't lie, the songs are all very well written, and the atmospheric black metal transitions to the post rock sections so smoothly that it never once comes off as clunky or forced.

Of the seven tracks here, only four are really traditional "songs" like you'd expect, with each one being broken up by a shorter (semi)instrumental interlude.  These interludes are actually very well done and flow remarkably with the mood and pace of the album.  "Irresistable" in particular really stands out for me, being so damn calming and gorgeous, though "Windows" is also extremely captivating with the aforementioned spoken word samples.  Of the more structured "songs" on the album, I feel like it's cliche to say but I really find "Vertigo" to be my favorite on this first listen.  It's the longest one, but it never feels like it's being stretched out.  It moves along at a deliberate pace and contains a lot of ideas, but it's all very well thought out and the complexities make themselves known without being obnoxious about it.  What I mean is that throughout all the pretentiousness and cliches of post-black metal, this entire album is very well written and yet doesn't seem to feel the need to be all in-your-face and intellectual about it.  It's content to tell you its story, relay to you its imagery, and just sit back and let you soak it all in.  I like that about it, Sunbather is a very passive album.  It's a pleasant listen, with many moods and relatively simple execution.  It's basically a lot of ideas boiled down to a minimalistic approach to songwriting and it knocks it out of the park.  It's not showy or irritating, it's just... good.

In the realm of pretty, atmospheric black metal, I may not be an expert but I suspect that Sunbather is far from one of the worst in the genre.  The vocals are very distant and brash, the guitars are clear yet kinda dirty, it's basically everything you'd expect from a production standpoint, but therein lies what I like about the record.  Nothing in particular strikes me as horribly new or innovative, but it's just a simple album with a simple goal and it's done very well.  There's nothing worth hating (nor praising to high heaven for that matter), and overall I can't think of too many bad things to say about it.  For a first impression, Sunbather left a hell of a mark.  Again, I don't see this making my top 10/13/15/however many I decide to do this year, but if there's not much I would change about it and it keeps me engaged for a full hour despite stupid pretentious lyrics and waves of unnecessary hype, I'd have to say that Deafheaven hit a pretty strong ball.  It's no 700ft over-the-bleachers moonshot, but it's a solid double in the perfect seam between two outfielders.