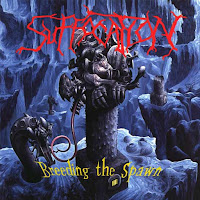 If I had it my way, I'd review every album in their original run with that one made up word and be done with it.  That tells you everything you need to know.  It's not unrealistic to say that probably half of modern death metal is at least partially Suffocation's fault, their flair for the technical, the chaotic, and the punishing all rolled into one package was simply inhuman in the early 90s, and every release from Human Waste to Pierced from Within showcases this with aplomb, and I'd argue none more so than the world's most well known underappreciated album, Breeding the Spawn does this the most clearly.

Now yes, there is an elephant in the room that I'll just address right away.  Yes, the production is trebly and shitty.  Yes, it hurts the overall package to an extent.  No, I don't fucking care.  I can understand being disappointed with the tinny, hollow sound found on the album, but to act like it completely ruins the experience for you just outs you as some sort of dork who's never actually heard a death metal album before.  Yes, Effigy of the Forgotten was primal and savage while Pierced from Within is probably the heaviest sounding record to ever grace the 90s, but those two masterclasses in sound engineering have no bearing on Breeding the Spawn, and shouldn't be used to taint your memory of this album.  The sharp splashiness of the album gives it a unique character anyway, and whatever lughead they hired to clumsily fuck up the entire album actually did a pretty good job of keeping the bass prominent, letting those low end licks get their moment in the spotlight when it's time.  Yeah I would've preferred this album gotten the Morrisound treatment like nearly every other worthwhile early death metal release, but I've grown to love this bizarre, mangled hackjob of a production over the years, and you should to.

And on that note, I know it's really lazy to quote another review in my own work, but veteran MA scribe, Cheeses Priced, really said it best when he said "They tend to be pretty good about not playing the exact same bar of music over and over again – but neither do they shift about at random – instead, they deliberately mangle the hell out of whatever it is that they’re playing as they go, offering a number of variations of each idea, making for music with a real sense of depth and complexity."  That sentence alone sums up basically everything there is to know about Suffocation's unique style as a whole.  That's part of what makes Breeding the Spawn so special, as it's arguably their most chaotic album, with their trademark brand of twisted evolution naturally leading every song down a craggly chasm into the pits of Hell itself.  Take a look at one of my personal favorites from the album, "Epitaph of the Credulous".  From the start, it takes what logically should be an archetypical thrashy death metal song, but they present it with a hint of dutch angled lunacy, where everything sounds ever so slightly tilted countercockwise, and as it progresses it hurls left-field bass runs at you that flick the air like a serpent's tongue, before leading into an arrhythmic breakdown that straddles the line between the kind of slam that the entire Sevared Records roster would rip off a decade later and an almost Meshuggah-esque eschewing of logical flow, never entirely sure when the next beat is going to come until it slaps you in the face like Tyson haymaker.  That's really the whole album in a nutshell: as unpredictable and creative as Ali with the raw power of Tyson.  "Beginning of Sorrow" showcases this tendency right off the bat, drawing from an unfathomably deep well of riffs and growing organically along a twisted vine.  It's a colossal, pulsating katamari of nightmares and rotting spleens.

Mike Smith further cements himself as one of the standout drummers in the initial swell of American death metal, with his unhinged and chaotic creativity being matched only by sheer inventiveness of Pete Sandoval.  The intensity in the rhythm section is completely off the charts, with his signature hammer blasting pummeling listeners at every 120 degree turn.  It's neck snapping and unpredictable without being pointless noodling, always throwing in a crushing groove whenever the music starts to get a little bit too close to "normal".  I've always maintained that Doug Cerrito had to be the hidden genius in Suffocation, since their albums in the 90s are so vastly superior to everything since the reunion in 2003, but in all honesty his contributions are pretty split between he and the heart and soul of the band's sound, Terrance Hobbs.  Cerrito seemed to be one of the chief architects of the band's identity of spiraling madness that I keep jerking off, but Hobbs seemed to have a more nuanced sense of sinister morbidity.  A track like "Animalistic Offerings" can be downright unsettling when he takes the forefront for a bizarre lead or solo.  An easy way to remember it is that the more overtly heavy tracks are Cerrito's, and the more chaotic and unhinged ones belong to Hobbs.

Basically the only flaw the album has is that the production is obviously bunk, and Frank sounds ever so slightly less awesome than he did on Effigy of the Forgotten two years prior.  Here he's a little less savage and a little more coherent (which would eventually grow into one of my few pet peeves with the band around the turn of the century), with his hilarious "New Yawk" accent peeping through when you're paying attention.  But even then, this is a comically tiny complaint, as his roar is still powerful enough to provide energy to a small village.

If you know anything about Suffocation, it's that they've been slowly rerecording this album over time, with one track appearing on every successive album barring Souls to Deny, and to date the only ones missing are "Epitaph of the Credulous", "Ornaments of Decrepancy", and "Ignorant Deprivation".  The true tragedy as that those are potentially the three best songs (the breakdowns on "Ignorant Deprivation" seriously rival something like "Brood of Hatred" in their sheer force).  But what it really shows is that the band understands how brilliant this album was and how tragically it was handled by the label with the production job and mistreatment of the whole ordeal.  So Breeding the Spawn stands as the "forgotten" album that everybody seems to know about, and it's absolutely worth your time.  Suffocation is one of the greatest bands on the planet in the realm of death metal in all of its subniches, and if you're wary about checking this one out because it's infamous for it's trebly mix, then you're depriving yourself of some of the most creative and hard hitting metal ever penned.

Basically just don't be a pussy.