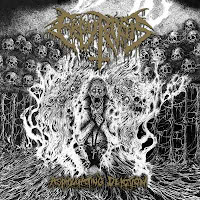 This is some old school to-the-bone death metal, and it works for what it tries to accomplish.  Unfortunately, the biggest problem with Italy's Ekpyrosis is that it doesn't even attempt to tread new ground.  Not that that is a death sentence in itself, but it's disappointing to hear a band that clearly has chops and songwriting talent bog themselves down in the mire of worship.  Basically any second of this album can be attributed to early Death or Dismember, with a few hints of New York stalwarts Immolation and Suffocation.  Really, all that needs to be listened to is the opening salvo, "Profound Death".  This track fucking nails it.  It's over seven minutes long and is chock full of enough ideas to extend it to a theoretical double digit runtime.  There's a punishing segment in the breakdown that calls to mind the aforementioned NYDM legends, and it's very clearly the high point of the album.  "Obsessive Christendom" has a similarly savage middle section that shows where the band's strength lies, but unfortunately the rest of the album is unimaginative (if solid) OSDM worship.  All of the slower, more midpaced crushing segments stand out with aplomb, but the rest of it is just kinda there.  Asphyxiating Devotion is another album to be thrown on the pile of solid death metal that's been flooding the scene since 2011ish, but it's not going to rise up and take the scene by storm like Horrendous have in the past.  Bands like Portal and Ulcerate, while I'm not the biggest fans of them, at least work to move the genre forward in some tangible way, whereas this is content to sit in its comfort zone.  It's certainly good at it, but not great.