I generally stick to new metal albums, but occasionally I'm going to want to return to my roots and gab on about older albums, so please enjoy this slightly rebranded but functionally identical Quick Hit. 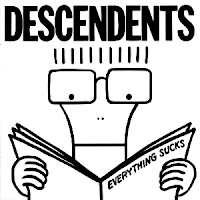 GOT UP ON THE WRONG SIDE OF LIFE THIS MORNING

Hey look, I'm not reviewing metal!  My listening has been split nearly 60/40 with punk ever since I realized Bad Religion was the greatest band in rock history (next to Queen of course), I just never talk about it because that's not why anybody reads my shit.  Today I got a bug up my ass and I want to talk about Descendents, in particular their fifth album, Everything Sucks.  I posit to you all that Everything Sucks is actually Descendents' best album, above even the seminal early American classic that is Milo Goes to College.  You see, early Descendents really tapped into teenage fear and angst in a way that hits home with most lonely high schoolers.  Tales of unrequited love and fear of growing up are interspersed between energetic blasts of goofy nonsense, sexual fantasies, and toilet humor.  That was their big appeal for me, they fearlessly explored every facet of adolescence, with all of the incongruity and tonal shifts that that would imply.  The band suffered two hiatuses early on brought on by lead vocalist and frequent cover art model, Milo Auckermann, leaving to pursue his studies and career in biochemistry.  After nine years, he got the itch and helped Descendents get back together (though they never truly left and the band always soldiered on as All without him) for their first album in nine years.  The reason this one is special to me is because the band actually grew in a way without abandoning one iota of what made them so iconic on the early albums.  Milo Goes to College and I Don't Want to Grow Up were based on the balking of adulthood and wanting to remain in the halcyon years of youth forever, and then Everything Sucks shows up and gives it all a new perspective.  They are adults now, and everything is exactly as shitty as they'd always feared.  Songs like "When I Get Old" are presented with a bit of wistful nostalgia, while "Everything Sux" and "This Place" confronts the bullshittery of adulthood with that passionate rebelliousness of adolescence that they never lost in the meantime.  That's what's so great, the music itself didn't "mature".  They didn't start adding new elements to the songs, they didn't mellow out, they didn't slow down and write more accessible radio friendly songs, the songs are almost all entirely the fast paced melodic poppy punk it's always been, with the sub-minute energetic blasts of "Coffee Mug" and "Eunuch Boy" being odes to spazzing out after drinking too much coffee and how much it would suck to not have a dick, respectively.  The goofiness is still there, and now the Nice Guy songs are presented in a slightly more pathetic light, and "Sick-O-Me" details how a long term relationship falls about due to boredom and complacency.  They're basically the weird uncle of punk rock, the guy who drinks a few too many beers and tries out his nephew's new pogo stick at Christmas with predictably disastrous results.  They're still ineffectual dorks, but they're more experienced about it now, but still wholly unwilling to let go of that youth they cherish so much, and it's a very sincere look at the whole situation.  And that's why it's their best album, it's the perfect snapshot in time between the stages of youthful rebellion and desperately trying to recapture it.  Everybody should love this.