Last year, I managed a paltry 20 reviews for the entirety of 2016, five of which were mostly pre-written pieces for the Gospel of Gargoyle series that I swear I'll finish some day.  Frankly, I have all kinds of stuff to talk about but very little of it can be stretched into the lengthy essay style I've made my trademark over the last nine years.  So in an effort to get back into this reviewing game I adore so much, I'm breaking from the 1500+ word style that I've gotten too comfortable with, and I'm bringing back my short, one paragraph blurb style reviews that I would occasionally crank out back when I first launched this blog in 2011.  Back then they were called Bite Sized Reviews, in an obvious ode to my love affair with chocolate.  They are now named Quick Hits, which is not actually a weed reference, but instead a quip about how utterly broken the skill is in Final Fantasy X.  Shove me in a locker, please. 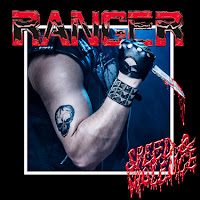 The latest group of shameless throwbacks to land on my radar, Helsinki's Ranger, are pretty much the exact kind of creatively bereft loons I've always secretly loved.  Speed & Violence barely contains more than three original notes strung together in a row but it's such an unapologetic blast of 80s nostalgia that I can't help but love it.  Ranger specializes in early speed metal, but less the German kind that evolved into power metal like Blind Guardian and Running Wild, and more the Canadian variant that evolved into thrash metal like Razor and the band's chief influence, Exciter.  There are some smatterings of early Slayer as well, with "Satanic Panic" basically being the most obvious knockoff of "Black Magic" I've heard in eons.  Despite the overwhelming deja-vu offered by the album, it's such a bucketload of fun that I don't really care all that much.  Speed & Violence doesn't present itself as anything other than exactly what it says on the tin.  It's fast, loud, and rude and that's all it needs to be.  You look at that low budget album cover and you already know you're going to get semi-tuneless wailing over relentless double bass and non stop riffage delivered at 200mph, and that's exactly what you get.  It's high speed cheese and nothing else, and while that's certainly enjoyable, it does get old and generally lacks in any real staying power.  That's the album's sole downfall, it does what it does so well that it just makes you want to go put on Heavy Metal Maniac or Executioner's Song instead because at least those albums have already proven themselves to be timeless classics instead of shameless copies of themselves.  So yeah, it's a fun listen but it doesn't have a whole lot of use beyond just reveling in how much fun the music was way back then.  It is, by it's very nature (and the exact reason I chose it for the first of these short reviews I'm going to start doing), a quick hit.