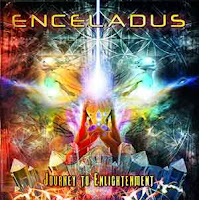 Their full potential is SO FAR AWAAAAYY

It's easy to forget, but pre-Myspace, pre-Guitar Hero, pre-Inhuman Rampage, Dragonforce enjoyed what seemed like universal adoration.  I miss that era because Valley of the Damned and Sonic Firestorm are absolutely fantastic albums, 100% worthy of all the praise heaped upon them up until 2006ish.  They were ludicrously over the top departures from the sometimes subdued melody and relative simplicity that power metal thrived on, and instead of eschewing the singalong choruses and sugary keyboard lines, they simply added forty tons of unapologetic bombast and non stop shredding on top, and it worked.  Upon first listen to Enceladus' debut, Journey to Enlightenment, seemed to be a throwback to exactly that idea.  The opening title track throws caution to the wind and just throws melody after solo after solo after hyperspeed solo at you, slowing down for nothing and making its presence known as a force to be reckoned with in terms of technicality.  I was instantly hooked, and couldn't wait for the rest of the album.  Unfortunately, the biggest flaw is... well, the rest of the album.  See, the title track is instrumental, and is essentially just a stripped down showcase of the individual instrumentalists' immense talent.  The rest of the album however, is more standard in the sense that yes, the do actually have a vocalist.  The problem is that he's, to put it lightly, very not good.  His tenor is just all over the place and it seems like he has no control over what he's trying to sing, and it just sounds off somehow, like he's just a teeny bit out of pitch at all times and I just can't seem to pinpoint it.  He occasionally showcases a stratospheric falsetto, but it's thin and weak and really detracts from the pyrotechnics of the rest of the band.  The fact that he album is 13 tracks and nearly an hour long exacerbate the problem, because as great as it is musically, it's fairly one-note, and the poor vocals only make it harder to listen to.  Overall it's a solid album in a style I really like, but the vocals are a huge elephant in the room that I'd like to see addressed somehow, because they easily knocked a good 20 or so points off the final score.