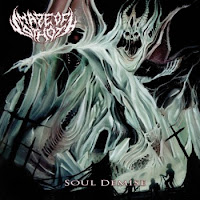 So it looks like 2017 is going to start off with a slew of brutality, as here I sit with another early release that revels in bone crunching devastation; Soul Demise by Maze of Sothoth.  I feel like tech death has really fallen out of favor with most metalheads, with special exceptions reserved for the old guard like Origin and Wormed, so hearing a new(ish) band unapologetically shred and riff my ears off like this is a nice surprise.  Maybe it's the Italian connection, but I'm hearing a lot of Hour of Penance and early Fleshgod Apocalypse (before they decided to be Death Metal Rhapsody of Fire) in this, and if you've been following me for a while it should come as no surprise that I love it.  Soul Demise is much less about just showing off their instrumental skill and more about cramming as many badass hyperspeed riffs into each second as possible.  Of course, this naturally comes off as something of a riff salad as a result, lacking in overall cohesion across the board.  Honestly, that doesn't bother me when it comes to this type of style, since that's basically the norm, and albums like Hour of Penance's Sedition are glorious exceptions.  Oddly enough, I actually thought this was an instrumental band initially, as I didn't even notice vocals until the third track.  Once I did though, he seemed to take the Origin approach and just never shut the hell up.  So all told, it's pretty standard for the modern tech death game, with sprinklings of Immolation and Morbid Angel in the more spastic and squealy riffs found in songs like "Blind", but it's a really solid offering for fans of the style, and I'd recommend it to anybody who thought death metal was thriving from 08-11, because this is a welcome throwback to an era that only recently left us.  Certainly better than Archspire, if nothing else.