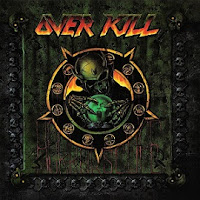 The eulogy he would've wanted

If you've followed my reviews for a while, you know that I've covered Overkill plenty throughout my career.  You'll also know that I've never given them a positive review.  It's true!  Somehow I've just always gravitated towards knocking them down a few pegs because they had so many albums I hated that people seemed to give a pass, and it always bewildered me.  However, I'm not an insane person.  As a thrash fan, I know damn well that Overkill has plenty of great albums too, and I think it's about high time I covered one.  I promised a friend I would do so a long time ago.  And now, in my perpetual lateness, I'm going to fulfill my promise to my now-fallen compatriot, and give an honest review of his all time favorite album (or maybe second place next to some choice albums from Limbonic Art or Kalmah or something), Overkill's fifth and arguably finest album, Horrorscope.

The most obvious and major factor most people should realize when it comes to this album is the not-so-amicable departure of longtime axe-slinger Bobby Gustafson.  Overkill may be most obviously defined by Blitz's signature nasally snarl and D.D. Verni's mega-trebly *dween* bass tone, but Gustafson was a force to be reckoned with in the early days, churning out classic riffs left and right ("Hammerhead" from the debut contains one of my all time favorite riffs ever written) and writing a good chunk of the music, in particular the (frankly undeserving, but hey) classic The Years of Decay.  Him getting the boot should have been a huge blow to the band's sound, but Blitz and D.D. ain't no fuckin' quitters so they just regrouped and hammered out one of the monsters of early 90s thrash in retaliation.

I've made this point over and over, but thrash was never great necessarily because of Overkill, instead Overkill was great because thrash as a genre was great.  This shows here, because the early 90s was a good era to be a product of the times as a thrash band.  The album I've always seen to be the parallel to Horrorscope is Kreator's seminal Coma of Souls, what with both having a really dry-yet-punchy production and a heightened influence of slower, more crushing moments in conjunction with their customary neck wrecking tempos.  This might seem immediately odd, because one of my biggest complaints with The Years of Decay is that there are too many slow songs that bog down the pace and break the flow, but the big difference here is that the slower tracks here are just flat out fucking excellent.  While something like "Skullkrusher" just sounded slow with little else in mind, something like "Horrorscope" or "New Machine" sounds like there's a clear goal at stake.  For example, something like the title track actually feels like a true marriage of thrash and doom metal, something the band had attempted before and would continue to attempt throughout their career and never quite nail again.  It's slow, but the riffs are menacing and pounding instead of meandering and dull.  It's still a driving force, and the extended one note breakdown just absolutely decimates with the addition of something simple like the haunting guitar melody in the background.  "Nice Day... for a Funeral" utilizes this same trick and it sort of astounds me that they never managed to make this work again, because it turns out this nebulous coagulation of melancholy and malice creates an incredibly neat effect.  "New Machine" may actually be my favorite of these tracks for an entirely different reason.  That one sounds more like a simplified version of "Who Tends the Fire" but works 1000% better simply because it gets to the point quicker and is carried by a super tight groove.  Yeah, this is basically just a groove metal track, something they'd tie their noose to before flailing around for 20 years and failing to write more than a handful good ones despite focusing entirely on them, but damn if their first foray into the style isn't a home run.  That main riff is an absolute banger.

However, this is motherfucking Overkill we're talking about here.  The fact that their constant experimentation with slower tempos finally worked this time is a nice bonus, but it's not what makes Horrorscope such a classic.  Hell no, it's their fervent dedication to punk-infused attitude entwined seamlessly with top-tier thrashing mayhem that made them stand out in the first place, and this is arguably their most consistently vicious offering of tracks in that vein.  "Coma" kicks things off with a nice clean intro to lull you into a false safety, because once the riffs start the band makes extra god damned clear that they mean fucking business.  I've never once heard the section with the double bass in the intro and not immediately sought out the nearest living thing and punched it to death.  The lion's share of the music here follows somewhat in line with The Years of Decay, what with the extremely obvious Metallica influence shining through with the monstrously chunky riffs and decidedly simplistic drumming carrying most of the songs.  It's like if that 1989 album was full of tracks like "Elimination" an "Evil Never Dies" all the way through, because it's just a non stop riff attack and it shows up most of their contemporaries.  Overkill was never the fastest or the heaviest of their peers, but this is one of those times when it didn't matter for them, and through the power of sheer songwriting fortitude they managed to deliver an unreal streak of excellence.  "Thanx for Nothin'" shoves their punk roots in your face without ever sacrificing an ounce of their osmium, and the chorus can whip any crowd into a frenzy effortlessly.  "Live Young, Die Free" and "Bare Bones" rip and tear through listeners as if they were paper, with riffs so simultaneously fast and chunky that they sound like tommy guns that fire raw steaks.  I could be a dick and point out that they both sound an awful lot like "Battery" but if you haven't noticed, the frequent Metallica-isms work to this album's benefit rather than its detriment.  Instead of sounding like a calculated knockoff of Master of Puppets like the previous album did, this sounds like the lost album recorded in lieu of And Justice for All.  It's a logical continuation of what they were doing before, except this time they decided to push further towards the extreme end of the spectrum instead of settling on an easier-to-digest groove.  No, this is one of the gloriously few times that Overkill found themselves truly pushing an envelope, because this is by far the hungriest they've ever sounded.  As a result, Horrorscope is probably the most Overkill album that Overkill ever released.  This is the one where they truly solidified their identity to me, and it's a damn shame that they abandoned it so quickly.

There are nitpicks but they're just that, nitpicks.  Blitz doesn't sound quite as manic as the albums from the Three Bobbys era, and he's really the only musical aspect of the band that didn't make a massive improvement.  There aren't any moments like that insanely tense crescendo in "Evil Never Dies" here, instead he just does his thing in a fairly utilitarian manner.  Fortunately that's not really a big deal because even when he's in pure workman mode and giving the guitars the spotlight, he stands out for his iconic vocal delivery alone.  The solos aren't quite as memorable either, but that's to be expected because even when Overkill finally got their shit together and released another great album 19 years later, they never fully managed to replace Gustafson's absolute wizardry on the fretboard.  "Infectious" is a kind of meh song and the Edgar Winter cover is entirely pointless as well, but overall that's really all the negative things I have to say about this album.

Feel the Fire will always be the band's finest hour to me, but their first two albums have a pretty different approach than what came afterwards, and if you want to split hairs so finely that you're in danger of nuclear fission, Horrorscope is unquestionably the highlight of the second phase of the band's first era.  This was the sound of a band in lockstep with one another, taking a brutal departure in stride instead of reeling and scrambling to make something work in his absence.  I know Horrorscope is a very well respected album, but it deserves even more than it gets, which is saying a lot.  This is 53 minutes of non stop action that feels like it flies by in 30.  Overkill wouldn't be this exciting and adrenaline-inducing for nearly two solid decades, and it's a great swansong for the classic era of the genre in general.  Everybody should be familiar with it, and if you're not, fucking fix that right the hell now, because this is a stone cold classic.


RIP Diamhea, you were a monster truck that walked like a man.  I'm sorry you aren't here to see me make an attempt to fulfill a dumb promise I made purely out of respect for such an insanely dedicated individual.  Hopefully I made good on my end.  You are the Beef Castle that took a lot of shit in stride and deserve all the credit in the world for making this site run as smoothly as it has for the past five years you were on the team.  Oh, and never forget: !!!FUCK YOU!!!