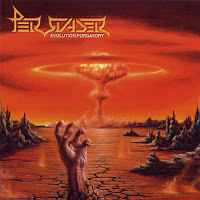 I love this fucking album, really I do.  But because I love Evolution Purgatory so much, I have to admit its faults, so I'm just gonna knock those out of the way before I even get to the rest of it because I'm going to coat it in so much fanboy goo that it's probably insulting to the infertile.  The mix is kinda off, with the vocals and leads being WAY louder than anything else, which is kinda disappointing when the album is so jam packed full of excellent riffage.  Also the album does hit sort of a dead patch because the only two songs that are less than perfect are immediately one after the other in the tracklisting (those being "Passion/Pain" and "Raise Hell").

That's it!  Everything else is flawless so let's get on with it.

Persuader is a Swedish power metal band that got a lot of hype in the mid 2000s for reasons that are admittedly kind of untrue once you become more familiar with the band and style as a whole.  One of their big claims to fame is that the vocalist, Jens Carlsson, is an absolute dead ringer for the inimitable Hansi Kursch.  I'll touch on it more in detail later, but that's only half true.  Their other big hype generator is that they were heavy.  This was the power metal album to shove in people's faces for a long time whenever they'd complain about power metal being a dumb flowery style full of sissy nerds with squeaky voices doinking on about dragons and maidens with loads of slinky keyboards.  Again, this is kind of unfair because people who make that criticism are the same types of people who say all black metal is fuzzy tremolos and blastbeats with bad shrieking recorded on an answering machine or all death metal is cacophonous noise with talentless gurgling.  If you've ever listened to anything beyond Stratovarius or Nightwish you'd be well aware of that, but 2004 was the era when Blind Guardian and Helloween were putting out A Night at the Opera and Rabbit Don't Come Easy so I guess people just conveniently forgot Black Majesty existed and assumed everybody forgot how to riff.

Now, despite the frequent (incorrect) claim that Persuader was the only band kicking ass in the genre at the time, it does nothing to diminish the fact that it is heavy as shit.  Evolution Purgatory is pure fucking testosterone spraying out of every orifice with the force of a firehose.  These riffs hit so hard that you're in danger of breaking your jaw upon listening.  The vocals are so wild and insane that I'm pretty sure he's chewed off one of my fingers through the speakers.  The album as a whole carries such a hefty fucking set of testicles that the band has to carry them over their shoulder and use them to club everybody wearing a burlap tunic to death.  It's just this behemoth katamari made entirely of nutsacks and fists and its only goal is to punchfuck you until your brain leaks out of your armpits.

What all that really means is that Persuader isn't afraid to amp up the punchiness and take influence from some of the harder forms of thrash and speed metal without ever losing their touch for the signature power metal strength of melodies.  Listen to something like "Sanity Soiled" or "Godfather", the riffs build around these vaguely-thrashy atom bombs that carry a surprising amount of weight.  The band doesn't often truly kick it into overdrive and fly through crazy high tempos, but that just means that these riffs just hit you even harder.  They don't shred you, they don't tear you apart, they pulverize you instead.  It takes a lot of skill to take a more rhythmic focus in such a melodic genre and not sound lazy.  Not many bands can focus on mid-to-high tempo open string chugging and sound ferocious instead of dull, but Persuader pulls it off effortlessly here.  But with that said, they really run the gamut of all possible influences for this particular subniche of power metal.  Opener "Strike Down" is a more traditional power metal affair, while "Fire at Will" is a thrash-infused murder fiesta, while "Masquerade" stands as probably the most melodic song on the record and still manages to have verse riffs that sound like the band is coming apart at the seams and the drummer completely forgets what to do so he just spazzes out, while "To the End" is just total high speed anarchy from the word go, it just never stops.  Every track has a new surprise for the listener and it perfectly straddles the line between eclectic and pandering, instead becoming the aforementioned abomination of balls and knuckles that rampages through the album like an avalanche run through your barbaric teenage fantasies.  Seriously, I'm sure "Fire at Will" manages to make everybody named Will run for their fucking lives during a live set, because I know I would have to restrain myself from taking the song literally and just letting adrenaline take over while I destroy everybody in the near vicinity.

I said previously that the mix tends to favor Jens a bit too much, but really he's such a highlight of the band that it's only a flaw in a technical sense.  Yes, he sounds like Hansi, but only on a surface level, once you think about it medium-hard he's actually quite unique.  Blind Guardian is obviously the chief influence and I don't think anybody will deny that, but he approaches his vocals in a completely different way.  Hansi is a bard, a crooner.  He could be vicious on the early albums when they were "young, fast, and freaky", in his own words, but ultimately he was a storyteller who simply added the appropriate amount of sinister gravel to his otherwise perfectly smooth voice when the song called for it.  His penchant for layering over himself ten quadrillion times made a great choir effect that added so much to their most epic tracks, especially from 1995 and onwards.  Jens doesn't do that shit.  No, he may have an extremely similar "default" voice and somehow managed to replicate his hilariously heavy German accent perfectly, but he approaches his craft with all the wild-eyed lunacy of a feral maniac.  He lacks some of Hansi's signature baritone, instead sounding like a shrill, cockeyed freak with blood seeping through his teeth.  He is constantly flying off the handle with freakish shrieks and deep growls, throwing harsh vocals into the mix with little restraint.  Take a gander at one of the album's highlights, "Turn to Dust".  Throughout the verses I swear he's cycling through every possible style of vocal inflection he can think of with each new line, going from full throated harsh screaming to scratchy high pitched screeching to deep death metal-esque bellows to almost soulful Hansi styled smoothness to everything in between, all within the course of one twelve second stanza.  When the vocals do layer on top of one another it always has more in common with a thrash gang shout than a power metal choir.  For all the similarities to Hansi that he has, he's has an undeniably more visceral and gritty voice.  He's by no means a better singer than Hansi (nobody is), but he's definitely a more insane one.  If the bridge in "Sanity Soiled" doesn't convince you, then you're beyond saving.  EVOLUSHON PURGATORAAAAAAAAAAYYYYYYYY

The band's greatest strength down the road, as they dropped their manic intensity, is undoubtedly their penchant for great melodies and choruses, and even though they're not the star of the show here, that strength is still showcased with aplomb.  Persuader is not complex art, they aim to rip your limbs off and beat you with them while being as stylish as possible, and they definitely accomplish that, but there's a surprising amount of depth and complexity to how they craft these insanely vicious singalong moments.  "Masquerade", "Turn to Dust", "To the End", "Raise Hell", all of them exemplify their dedication to forward propulsion, because they never rest on a hook and let it carry the chorus into your enduring memory.  Instead they do the vocal equivalent of how James Malone manages to play riffs and solos at the same time with Arsis and wind up smashing three different hooks together to create this unconventionally infectious style of chorus writing that sounds like a pre-chorus and two different choruses all roaring at you at the same time.  I can't get enough of this shit, I don't care if they're better on When Eden Burns, they pound so fucking hard when coupled with the frenetic intensity of the rest of the songs on Evolution Purgatory that they almost actually work better just due to the contrast of the nutso thrashing and vocal trapezery that leads up to the maddeningly catchy refrains.

There's no real place to put this, but seriously, bonus points to the guys for being a power metal band in the mid 2000s and realizing they aren't Blind Guardian so they don't try to write any ballads.  Power metal bands suck shit at ballads and thankfully Persuader understood that and just stuck to meaty fuckin' riffs the whole time instead.

I feel like I might've just rambled gibbering idiocy the whole time I've been writing this, but if you take anything away from this review, take away that Persuader absolutely fucking smashed with Evolution Purgatory and became semi-underground treasures for a damn good reason.  This is power metal for Slayer fans, for people who would rather crush skulls in a desolate wasteland than be whisked off to magical lands.  I like my prancy fairy metal as much as the next dork, but sometimes this shit just hits the spot, and it's had its hooks in me for over a decade at this point.

(ps: his accent is hilarious, "sword" always sounds like "serd" and "dark" is "dork")