Harakiri for the Sky - Arson 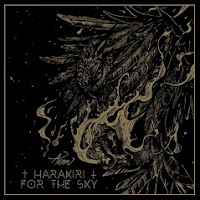 Through the darkness of future's past...

I'll admit that this is somewhat outside of my usual wheelhouse.  When I reach for black metal, I tend to prefer it to keep itself far away from the post rock/shoegaze trappings that have become so ubiquitous in the atmospheric camps as of late.  I have soft spots for Altar of Plagues and Wolves in the Throne Room but for the most part it just generally bores me to tears.  This is why the Austrian duo, Harakiri for the Sky, is such a huge surprise to me, because I love the absolute shit out of Arson.

From what little I can gather, most fans of the band find their fourth album here to be somewhat of a disappointment because very little has changed throughout their discography, but honestly this just tells me that I'm missing three other incredible albums by starting this late.  On paper, Harakiri for the Sky plays a fairly by-the-numbers brand of post-black, consisting mostly of melancholic melodies layered over simplistic mid paced riffs with distant vocals playing second fiddle to the melodies, but where I think this band excels is actually through their other fiddles.  The band takes the Anaal Nathrakh route of the two-man-band ideal by having M.S. handle all of the instrumentation while J.J. just stands there and screams, but I feel like choosing to take on a session drummer for Arson (the current drummer of Septicflesh) was probably a huge boon to the overall feel of the album, because he absolutely fucking murders his performance.  He seems to have an almost Kollias-level addiction to speed in his lower half, because almost the entirety of the album is comprised of him blasting his fucking heart out, and even when he slows down it's only through his upper half, as his feet continue pummeling away at insane speeds.  It lends a frantic dissonance to the experience that I adore, changing what would otherwise sound like "I'm dying and I'm very sad about it" into "I'm dying and I don't want to fucking die please help me."  Nothing about this sounds like a triumph, it's all instead a mournful dirge played with incongruent ferocity, and it's an extremely cool effect.  I'll take this speedy and riff-heavy approach over the weepy bleakness of Alcest any day.

Another thing that absolutely deserves mention is how brutally long every song is without ever feeling truly drawn out.  It never falls into mindless repetition, with each track being a dynamic journey complemented by seemingly dozens of riffs and patterns.  The most impressive parts of the band to me are the more peripheral aspects, but the songs all live and die by the strength of the melodies regardless.  There really aren't any moments where I find myself bored or wishing a certain section would hurry up and end, instead finding myself enraptured in gorgeous clean and/or soaring guitar lines over the frantic rhythm section.  It's pretty impressive to have the shortest song still fall north of the eight minute mark and never fall into a rut.  The meaty production helps a lot in this regard, because even if you do tune out, it remains quite full and never really results in passive background noise.

There are a few problems here though, and admittedly they're all fairly large.  For one, while the songs themselves are very dynamic and shift through many different sections with appropriately intense climaxes, they all tend to shift through the same dynamic.  The tempos are almost entirely dependent on a brisk mid-tempo or a desperate blast, the moods are all melancholic and depressive, and there are very few truly unique sections throughout the runtime (like the absolutely crushing quasi-breakdown riff in the climax of "Fire, Walk with Me" or the hopelessly gorgeous outro of "You Are the Scars").  There's no fully calm song nor any fully blast heavy full-metal-assault.  It's one mood, that's all you get.  I've skimmed a few reviews of the album online and many of them mention an almost Korpiklaani-esque folk metal section somewhere in "Stillborn" but that's... not at all true?  I think they're talking about the section at roughly 2:30 but really it's just the same basic thing they do for the rest of the album, just with a slightly more active guitar line.  I guess if you really squint your ears it sounds a bit like early Ensiferum but that's really stretching it.  What the hell?  Did one reviewer throw that reference in as a joke and everybody parroted it without actually listening?

It's also the opposite of succinct, with every song avoiding the problem of needless repetition but still following a similar structure throughout lengthy runtimes.  Including the Graveyard Lovers cover from the digital version (which I'm using to review), it clocks in at an excruciating 71 minutes.  With the songs all being so similar, this is one of the few albums where I would actually say that putting it on shuffle and listening to roughly three songs before just moving on to something else wouldn't devalue the experience at all.  That's about all it takes to get a full idea of what the album contains.  The first handful of tracks seem to have more individual standout sections but the last three tracks are probably tighter and more consistent on the whole, but even then it's a negligible difference.  "Tomb Omnia" and "Voidgazer" aren't really all that different from "Heroin Waltz" and "You Are the Scars" despite this distinction.

There's really no place to put this, but the vocals are worth noting as a flaw as well.  J.J. isn't a bad vocalist by any means but he's noticeably the only truly static element of the band.  His screams are all a monotone bellow, with no variation whatsoever between all of his lines.  He hardly even has a "metal" voice, entirely devoid of black metal screeching or howling.  It's just a gruff holler, and it wouldn't sound too out of place in a particularly moody (post) hardcore band.  I don't particularly mind it, personally, but it's noticeable and worth mentioning.

Now, here's where we peel back the curtain a bit and see how all of this relates to my own personal philosophy on music and reviewing.  To me, music is art.  There are different kinds of experiences and goals that any given metal band will tackle, but it's art all the same.  Taken as a piece of art as opposed to a clinical deconstruction of the elements at play within Arson, all of those flaws amount to essentially bupkis.  Yeah the songs are all fairly samey and it's agonizingly long, but... man who gives a shit?  I don't need a fuckin' math problem to tell me how much I enjoy something.  If you plug in the individual components and weigh them however you choose to weigh them, you're going to encounter a lot of negatives that drag the score down.  If those negatives actually do impact your enjoyment then hey, more power to you, but for me they just... don't.  If I used some sort of formula to score this album, it'd land somewhere probably as low as the high fifties or low sixties.  But in my heart of hearts, if I just ask myself "How much do I like this album?", the answer is a very simple "A shitload."