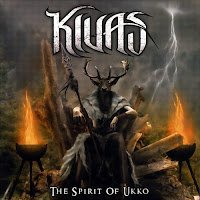 A bitter man, a void embraced

The benefit of hindsight has really made this album significantly better, hasn't it?  For the time travelers amongst us, we should have known that this couldn't last.  Kiuas started off as some sort of blasphemous creation that has no business existing on this plane of reality, so it was only a matter of time before they had to shed their extra layers to eventually pass as human.  In plain English, what I mean is that The Spirit of Ukko and Reformation saw Kiuas step onto the scene as something truly unique, taking influence from so many different branches of the metal family tree while still somehow remaining unified and cohesive, and it made them almost defy classification.  By the time The New Dark Age rolled around, they had dropped pretty much everything except punchy mid paced power metal from their sound, and I couldn't even tell you what Lustdriven sounded like because nobody actually listened to it, since the whole reason everybody fell in love with them in the first place is because they were so creative and unlike anything else, so who the fuck wants to hear them drop all of the cool parts?

So what this means is that their debut here marked a very special point in time, when they were young and hungry and completely unafraid to take any risks, because The Spirit of Ukko is quite a risky album, particularly in comparison to the humdrum safety of the second half of their career.  To understand the sheer eccentricity displayed here, consider that the most accurate description of this album would be "Epic Melodic Power/Death/Black/Thrash/Heavy/Folk Metal", and I'm not even kidding when I say that apart from power metal being the obvious base of the music, all of the outside oddities are displayed with equal strength, oftentimes within the course of one single song.  Take a gander at the opener, the title track.  It opens with straight meloblack tremolo picking and crazy fast blasting, but the melody is a bit more on the epic power metal side, with stinging keys accenting the note changes.  And then with a simple change in rhythm, without losing pace at all, it morphs into a more overtly melodeath riff, with the synth stings hitting even harder than they were previously.  That slows itself even further into a midpaced heavy/power metal groove, and all the while the main theme has stayed consistent.  After a short segue, it starts rocketing through a pinch harmonic laden thrash riff with subtle smatterings of melodeath, building upon itself larger and larger until the guitars start shredding and give way to Ilja Jalkanen's iconic voice, a lower tenor with enough oomph to launch a cannonball with just enough grit to sand it clean on the way out.  His full on cleans simulate the majestic soaring of... well, a god damned cannonball, and the harsh vocals that he doesn't utilize quite as often but still often enough to keep the variety unpredictable hit like a... fucking cannonball.  In between his vocal lines in this first verse, the riffs switch from beefy melodeath with a titanium backbone to equally strong power metal keyboard melodies, which eventually overtake the song and deliver a chorus that's just straight ahead crunchy power metal.  And that's just the first two minutes of the first song.  The fact that the band somehow managed to take this completely fucked-out mishmash of genres on paper and turn it into something that sounds like the most natural progression on the planet is nothing short of stunning.

Despite all of the genre hopping, the songs are all more or less recognizable as straight ahead power metal with little room for debate.  "Warrior Soul" showcases this the best, as it's probably the most "normal" of the good songs on display, and even then Jalkanen flails all over the place, utilizing his amazingly versatile voice in as many interesting ways he can think of while simultaneously giving us the best chorus on the album.  Seriously that hook is unreal, it's stuck in my head right now and I'm not even listening to that song.  "On Winds of Death We Ride" is potentially my favorite song on the record thanks to the pure thrash of the verses and the most venomous delivery the dudes can muster.  For real, the "Like beasts we now just SEEK OUR PREeEeEYyY" part makes me want to rip my own head off in an adrenaline fueled fugue, and that first natural harmonic run that explodes into furious blasting death is just head-spinningly masterful.  Special shoutout goes to "Across the Snows" as well for exploring the folkier side of the band, featuring a cool cleanly sung Finnish section and one of the hypest fucking build-and-release intros of 2005.

"Awesome!  What about the rest of the songs?"

The production on the album is excellently meaty, letting the riffs tear chunks of flesh off of every nearby flesh-having entity.  The drumming in particular stands out purely for how hard they pound despite the patterns themselves not being nearly as creative as the overall songwriting and riffing.  The Spirit of Ukko is very thunderous in this regard, and it's a huge boon to the album's overall enjoyment.

"Um, that's cool and all but didn't answer my question.  How are the rest of the songs?"

The uhh, did I talk about the vocals enough?  I feel like it's not mentioned often enough, but I can sense an almost grungy tone to his more snarly and theatrical vocals.  I think that's a neat feature, his voice is unique enough on its own but that inflection he has on the mid range croons are really cool and something I really haven't heard before or afterwards in the context of power metal.

THE REST OF THE ALBUM SUCKS, OKAY??  Fuck I hate this part so much but it's true, apart from the four songs I namedropped up there earlier there is nothing at all worth listening to here.  All that eclectic fire finds itself conspicuously absent throughout half of the album, and even when the band does stray into more interesting territory, it's always too little too late.  "Until We Reach the Shore" has a wicked keyboard solo but it's only after several minutes of plodding chug riffs that go fucking nowhere on their own.  "And the North Star Cried" has a cool breakdown to round out its intro but the rest of the song is so lame and pointless that I don't care to sit through it.  The remaining two tracks have no redeeming features whatsoever, being quasi-ballady chugpower dullardry.  It's hard to even spend time on this part of the review because seriously, I said it all already.  So little happens during these songs.  It's baffling to me how a band who can so effortlessly exude such boundless creativity and tie it all together in such a concise and powerful package can also be responsible for such maddeningly inconsequential crap.  This is sort of a harbinger of what would eventually signal the band's precipitous fall, and it's why I'll never bother to review their other albums.  These four songs will soon stretch the runtimes of full albums, and god dammit nobody wants to listen to the sixteen squintillionth generic hookless chuggy midpaced "power" metal band.  There's a reason "Warrior Soul" is such a celebrated monument of eccentric power metal and why most fans of the band forgot "Thorns of a Black Rose" existed until this sentence.

This is a really difficult album to score, because the high points are so high and the low points are so frustrating and disappointing.  The album's momentum is inconsistent thanks to almost every weak track falling between two good ones, so it's constantly starting and stopping and just lurching forwards on a hobbled foot.  The excellent vocals can't save the lame songs, the badass riffs only exist on the great songs, it's almost like The Spirit of Ukko is truly a split album between Kiuas and Nega-Kiuas.  The songs that sound like power metal getting super combo'd with a Wabbajack kick total ass, but the songs that just sound like normal old songs but without any hooks or emotion fall so flat that they leave Kiuas-shaped holes in the dirt.  I think overall, the album deserves a positive score simply because of how much I love the good songs, because this outside-the-box anarchism was pure lightning in a bottle that they only managed to recapture a handful of times.  Just go into it knowing that you're gonna have to keep a trained finger over the skip button.