Rhapsody of Fire - Triumph or Agony 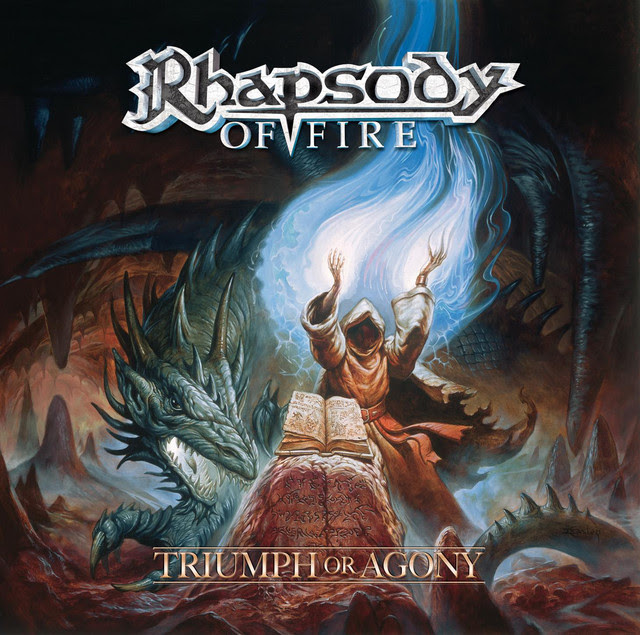 Rhapsody grows tired of being awesome

I feel like I've been pretty clear about this in the past, but I'm going to reiterate it really quickly: I love the shit out of Rhapsody.  They're pretty much the textbook example of what I love about power metal.  The songwriting is as busy as it is infectious and as theatrical as it is overindulgent.  It's a style that doesn't lend itself well to restraint, and that's why I can publicly love a stupid band like Dragonforce and not feel the slightest hint of shame.  This style is fun, and it's at its most fun when it's just throwing caution to the wind and letting loose all over the place, enthusiastically just throwing me on the back of Odahviing and sweeping me across magical lands and epic adventures.  That's what Rhapsody nailed so much with their original Emerald Sword Saga (the first four (five?) albums (Rain of a Thousand Flames is still an EP in my mind)).  The band simply did not give one single shit about subdued atmosphere or intelligent complexity, their sole goal was to tell a silly, cliched, over the top fantasy tale and cram as much epic sounding choirs and orchestrations they could into their journey.  Some people may not take well to the overindulgent ear candy style they aimed for, but I ate it up happily.

By the time their second story (The Dark Secret Saga) began, something had... changed.  Symphony of Enchanted Lands II was a much more subdued effort, much less focused on showy bombast and moreso focused on sweeping grandeur.  It was pretty I suppose, but "pretty" isn't the kind of feeling I want to envision whilst listening to Rhapsody.  I want to feel swept up above magical wars with entire worlds in the balance, not take a pleasant ride over a lush, green landscape.  The second chapter, Triumph or Agony, manages to fall in a similar pit, though for different reasons.

Rhapsody's entire tenure with Magic Circle Music can pretty much be summed up with the observation that one of their biggest criticisms early on was that there was always just too much going on in their music, and so they overcorrected and started writing droning songs where nothing at all would happen.   That was the biggest issue with Symphony of Enchanted Lands II; it was full of overlong filler songs with a couple great ones scattered around, whereas Triumph or Agony here gives us the worst of both worlds by giving us even more filler in the form of shorter but even more boring songs and filling almost the entire album with dull ballads.  Here's all you really need to know from this album, "Triumph or Agony", "Heart of the Darklands", "Son of Pain", parts of "Silent Dream", and parts of the trademark epic closing track, "The Mystic Prophecy of the Demon Knight".  That's three full songs and a handful of sections from two others, only one of any of those songs being one of the low tempo ballads/dullards.  This album is completely plagued with the sort, and many of Rhapsody's trademarks are missing.  There's no folksy bouncy track like "The March of the Swordmaster", "The Village of Dwarves" or "Danza di Fuoco e Ghiaccio", nor are there any out-and-out burners like "Holy Thunderforce", "Agony is My Name" or "Rain of a Thousand Flames".

"The Mystic Prophecy of the Demon Knight" may not hold a candle to previous and future album closers like "Symphony of Enchanted Lands", "Gargoyles, Angels of Darkness", or the near perfect "Heroes of the Waterfalls' Kingdom", but it's pretty serviceable for what it aims for and does a good job of bringing the album full circle by repeating the motifs of the overture.  It has a nice, typical Rhapsody style chorus, full of over the top projection and fluff, it's exactly the kind of thing fans want to hear.  So even though it isn't quite as good from a songwriting standpoint as we know the band can be, it's still pretty refreshing after seven or eight tracks that sound like an entirely different, and entirely less inspired band.  The first proper song, the title track, is also extremely good.  It's actually somewhat frustrating because it starts the album off on such a high note and lulls you into a false sense of security, feigning a fast, energetic journey to contrast the previous album's more laid back sightseeing tour.  The pre-chorus in particular is among the catchiest vocal lines that Lione has ever sang.

It's unfortunate that the darker, more intense yet overly bombastic sound of the first track fades away so quickly.  The next track is another fun, shreddy track, but after that the album just drops anchor and shits out three ballads in a row.  I mean, I'm not going to pretend that ballads automatically suck (I actually like "Son of Pain" pretty well), but they have never been the band's strength, and the fact that they always manage to shoehorn in at least one per album has always irritated me and has always held the band back from releasing any full, start to finish genre-defining classics.  Rhapsody is an energetic band and is at their best when gripping their hilts with vigor and determination, not languidly stroking their flaccid shafts while trying so desperately to emote anything other than enthusiastic spunk.   Trudging through nearly 45 minutes of a Rhapsody album nearly entirely devoid of Turilli and Starpoli's absurd guitar/keyboard soloing is like... man I sat here for like fifteen minutes with that sentence half finished because that is so unheard of.  Things like the completely obnoxious soloing and oversaturation of choirs and overblown orchestration is exactly what made the band what they were, and the dearth of all of these qualities leaves us with a very hollow, uninspired album.  The entire thing just runs by as if on autopilot, and save for the handful of exciting sections, it's just completely unstimulating.

I don't even know who Triumph or Agony is supposed to appeal to, honestly.  Old fans of the Emerald Sword Saga are going to find the utter lack of energy to be wanting, and the non-fans who disliked how busy and over the top the band previously was will likely find the exact same problem.  Like I said, the album just feels like a huge overcorrection in response to a criticism that called for something antithetical to the band's modus operandi in the first place.  They were a group of nerds and manchildren who didn't seem to realize how silly they were, but played everything so straight that it was endearing, and the goofy music was so enjoyable that there was no reason to hold it against them.  It seems that this album and its predecessor show a band who became self aware and then focused too much on trying to be more mature and dark, and it just ends up sounding like dull, plodding crap.  Thankfully, the following albums would rectify these issues (I'm going to just go ahead and blame Joey DeMaio's shitty label/attitude), but as it stands, the whole time spent with Magic Circle stands as the dead-ball era of Rhapsody's career, and Triumph or Agony illustrates the phenomenon brilliantly.  In the realm of over-the-top symphonic power metal, Rhapsody is one of the perennial heavyweight champions, and this is an album with only trace amounts of over-the-top, power, or even metal.  You do the math.