Diamond Plate - At the Mountains of Madness 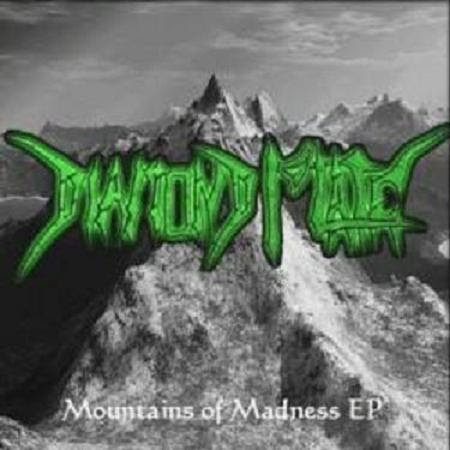 Well... the first handful of advance reviews for my former pet hometown heroes, Diamond Plate, are beginning to pour in, and the forecast is looking pretty grim.  I'll tackle that album when the time comes, but right now the sting of disappointment has dissipated into the warmth of nostalgia.  I remember this band of shrimps when they were all still in high school and utterly unable to grow facial hair.  I remember the buzz surrounding them after they opened for Overkill and Destruction and other assorted shows and stood their ground and held the stage just as well as the 25+ year thrash veterans.  I remember them whoring themselves out by playing seemingly every single marginally thrash related show in the Chicagoland area for years, just building reputation with an exuberant live performance and boundless energy, not to mention some excellent songs to boot.  I think back and remember how goddamn awesome they were once upon a time, and so I ask that you join my in my malted reveries today, as I take a look back at Diamond Plate's first contribution to the metal world, the (what I hoped would one day be considered the legendary) first demo, At the Mountains of Madness.

It starts off with a pointless intro that nobody likes hearing (seriously bands, stop doing that bullshit, it's stupid), but once that single unnecessary minute is out of the way, we get treated to over twenty minutes of nonstop thrashing intensity.  I've cited the following EP, Relativity, to be the band's crowning achievement, and I still believe that, but At the Mountains of Madness is an almost equally excellent romp for different reasons.  It's a lot rougher, sloppier, and rawer than everything they did afterwards, and it translates their live energy quite well to the record.  At this point in time, the band is extremely young, like fifteen years old or something to that effect, and it shows clearly (especially in hindsight).  Despite three of the five songs here being featured on the following two releases, this stands as a very immature demo, but believe me when I say I mean that in the most endearing way possible.  The songwriting is pretty basic for the most part, not entirely the pop structure of verse-chorus-blahblahblah, but far and away more simplistic than the more longwinded and progressive tendencies they would find themselves flirting with on Generation Why?

But what the songwriting lacks in complexity, it makes up for with intensity.  "Maelstrom", "The Alchemist", and the title track are the most obvious examples to point towards when discussing the youthful fervor of the band.  The riffing is that awesome blend of Megadeth, Anthrax, and Destruction that they had made their trademark at this juncture, with the classic stomps of the New York thrash scene being showcased in "Casualty of War" and "Criminal Justice", while the more straightforward, Slayer-influenced ones on the earlier tracks set the pace somewhere a hair above mach 6.  I've written about most of these songs three times over now, so all you really need to know is that they're all a devilish blend of ferocious and infectious.  The chorus of "At the Mountains of Madness" can easily stick in your head for a week if you let it, and the main riff of "Criminal Justice", despite it's relative simplicity, is one of the best examples of how to take a really basic thrash riff and keep it interesting over the course of a song.  These kids pretty much figured it out early and harnessed their extraordinary riff writing ability for as long as they apparently could.

The sound here is surprisingly thick for a three piece demo, if a bit guitar heavy in the sense that the bass is somewhat drowned.  It's not particularly bone breaking and it's not as polished up as they would later be, but it's pretty clean for a first demo.  Don't let that fool you though, At the Mountains of Madness is still very rough around the edges soundwise, and it helps keep them grounded in the DIY mentality of early thrash that they so readily exemplify.  Jon's vocals have always been a point of contention with many people, and they're just as divisive and controversial here as they've ever been.  It's a really hoarse shout, more along the lines of a dry bark than anything else.  It's not the best sound but I don't know what else would really fit with the band's style.  A more Araya inspired yell maybe?  I dunno, they could be better, but they've pretty much always been the only aspect of the band's early days that I wasn't entirely in love with, and even then I still like them, they're just kind of awkward sounding.

In my mind, this is the Diamond Plate I'll do my best to always remember.  The poofy headed Paul Baloff bassist and the prepubescent little blond kid on guitar, the high octane thrash with expertly written riffs and explosively melodious soloing, the huge Megadeth influence and overwhelming vigor.  This is what they used to represent; the next generation of metal bands.  Whether they still do or not is up for debate.  They've certainly exploded in popularity and branched out musically, but the thrash scene that helped nurture them has been abandoned in recent years.  These homegrown prodigies captured lightning in a bottle here on At the Mountains of Madness, and even managed to capture slightly more thunder in a slightly bigger bottle on Relativity the following year, but after that they've just been missing the bottle and end up getting struck.