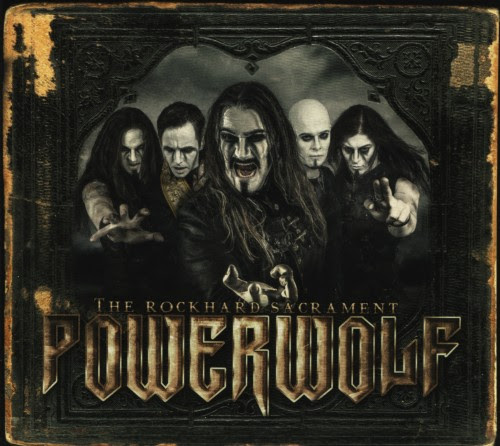 This really shouldn't even count as a real release.  It's just a little teaser EP that comes with the July 2013 issue of the German Rock Hard Magazine.  It's got two tracks from the upcoming (and (at least on my end) absurdly anticipated) new Powerwolf album, Preachers of the Night, two cover tracks, the b-side from the "Amen and Attack" single, and an orchestral arrangement of the lead hype track, the aforementioned "Amen and Attack".  As such, this is going to be a really short one, but I just can't keep my mouth shut and wait for the album to drop.  Why?  Every pre-release thing has made me jizz everywhere.

Take a look at that cover, Powerwolf is still just as corny and juvenile as they've always been, but man I wouldn't change a thing about them.  I love how seriously they take their theatrics while still having a blast while doing it.  Powerwolf has fun with their gimmick, but they never come off as those insincere dolts who will sneakily shoot an aside to their friends about how they're just doing this "ironically".  Like how 2 Chainz and Chainsaw Penis are apparently bad on purpose, Powerwolf is silly on purpose, but they play it so straight that it's just endearing.  I can see how this can turn people off, but the childishness is just infinitely charming to me, and it certainly helps that I love their music as well.

Yeah, musically, the offerings on The Rockhard Sacrament are just as stellar as ever.  The three original works are all for the most part pretty stunningly catchy and gigantic.  That's what I love about this band, I love the colossal bombast they throw behind what are otherwise pretty standard heavy metal songs.  They're full of high tempo riffing and big, anthemic, fist pumping choruses, but they back this already stadium-filling style of songwriting with gigantic church organs and massive choirs.  It's all so overblown and dramatic that it just perfectly appeals to my attention-whore qualities.  Everything Powerwolf does is in-your-face and deafening, and that's really all I want out of my heavy metal bands.  The three original works ("Amen and Attack", "In the Name of God", and "Living on a Nightmare") all fit this basic criteria, with the lattermost being a bit slower and more laid back, kind of in the vein of "Murder at Midnight" from the previous album.

That's one of the bigger problems with Powerwolf, and I'll freely admit it.  They are very guilty of sticking to sticking to a few set formulas and almost never deviating from them.  As much as I love "Amen and Attack" (and I have to stress I really fucking love it), it's pretty similar to something like "Sanctified with Dynamite", "Phantom of the Funeral", or "Seven Deadly Saints", and "In the Name of God" is basically "In Blood We Trust v.2.0".  So they're still pretty unoriginal in the grand scheme of things, but like so many other bands, they make up for it with an abundance of enthusiasm and a hugely energetic performance.  Because let's face it, Powerwolf is a band of showmen, they write some kick ass basic heavy metal with some neat gothic flourishes, but they're more about the spectacle overall.  And frankly, that spectacle shines through this music, and there's nothing I would change about their approach.  The Rockhard Sacrament is just an pointless little teaser, but it shows what the band is in a nutshell, and it's a really cool bonus for established fans like myself.

But with that said, it is pretty unnecessary.  I mean, "Amen and Attack" was already released online a while back, and "Living on a Nightmare" isn't even going to be featured on Preachers of the Night.  The covers are pretty cool, but they aren't worth seeking this out for ("The Headless Cross" sounds really cool, especially for a guy like me who just never got into the Tony Martin era of Sabbath, but "Nightcrawler" absolutely pales in comparison to Judas Priest's original (then again, Painkiller is just a goddamn perfect album and there's no way to improve upon its songs anyway (the fact that I love that album so much more than Sad Wings of Destiny also probably goes a long way in explaining why I love Powerwolf so much more than Virgin Steele (man this is one hell of a run-on parenthetical aside)))).  Basically yeah, this is a pretty pointless release, but it works well as a vessel for hyping up the new album, because here I am using my drool as lube while I pleasure myself in anticipation for it.  If you're not a fan of the silly childishness of the band's gimmick or the pretty standard Accept/Running Wild style heavy metal with gargantuan latin choruses or obnoxious church organ, this isn't going to change your mind.  Fans like me?  Eh... the content is good, but just wait and get the deluxe edition of Preachers of the Night if you want to hear the covers.

Basically, this has two ratings: