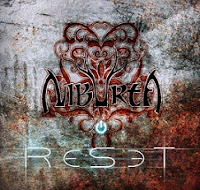 This... truly is a piece of work.  To really understand what this is, I need to give you a brief history lesson about Niburta.  They were a folk metal band.  That's it, lesson over, be sure to turn in your essays by the end of the week.  Really, they just took the Eluveitie route of blending folk metal with melodeath and calling it a day, with their only distinguishing feature being that the folk twanging they chose was Balkanic instead of Celtic.  Otherwise they were a complete clone band replete with In Flames reject riffs and melodies with random female vocals and fiddles and whatever twangboxes they have in Bulgaria.  They had one song that was maddeningly catchy ("Balkanic Heart") and were otherwise completely forgettable and not worth listening to.

The band realized this, and so they decided that they needed to do something to stand out.  Something to... say, reset their career on a clean slate so the endless comparisons would stop.  How could they do this?  How could they possibly rejuvenate a style like folk metal, whose moon has been on the wane ever since Korpiklaani became popular and made extremely clear how shallow and dumb 90% of the bands in the style were?  There had to be some fresh new idea that nobody had thought of yet.  Well in early 2015, Niburta figured it out, they decided to blend their lukewarm brand of played out folk metal with djentcore.

Here's what they forgot: djent cannot save folk metal.  Then again, djent couldn't save a game of Final Fantasy if the entire game took place within a save point and the only command in battle was "save" and it was called Final Fantasy: Save Point.

That opening preamble that consisted of calling the band shitty for trying a stupid idea and predictably failing at it is really all the musical description I need, you've got the gist of what this sounds like.  Three songs, thirteenish minutes, one stupid experiment.  The title track, "ReSet" stands out a slight bit for having an extended quiet folk section in the middle, but it's not a good reason to stand out, because Niburta was never particularly good at folking, and their metalling was always even worse.  Trying to modernize a once trendy style with another flashy trend (though admittedly it looks like djent might be here to stay, even if its popularity is dwindling slowly) is a dubious agenda to start with, but it's made apparent within the first few seconds of gentle cooing clashing harshly with the classic Meshuggah tone of robotic scooped mids, which also clashes against the soft and yet somehow still frantic fiddling that this is dead on arrival.  No individual performances stand out, it's djust a djumbled mess of white noise that goes nowhere.

I'm being a tinge unfair, because it's not djust djent they added, as they also moved away from the light melodeath and decided to try going a more metalcore route with their riffing.  Since that's essentially djust still light metalcore, the new tone and focus on rhythmic chugging makes ReSet sound less like "In Flames with fiddles" and more "Veil of Maya with no breakdowns, shittier vocals, and fiddles".  That's the long and (mercifully) short of it.  It doesn't seem like the band has gained any new traction with this new direction, so hopefully they can djust lay down and fade away painlessly instead of further assaulting good taste djaunty bullshit.