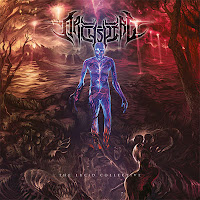 I mean it, this album is equatable to porn, and I don't mean it in a good way.  I've once heard pornography defined as "anything you lose interest in as soon as you finish masturbating", which is completely brilliant and it embarrasses me to admit that I can't for the life of me remember the source.  The point is that Archspire is astounding.  I listen to The Lucid Collective and I'm reminded of the first time I heard genre stalwarts like Origin or even bands who flashed in the pan extremely brightly before abandoning the style or just going generally MIA from the studio like Fleshgod Apocalypse and Decrepit Birth.  The percussion is monstrous, lightning quick, and precise.  The guitars shred at light speed through insanely technical leads and generally unimportant riffs, but they take the Decrepit Birth approach of loading everything down with melody so the riffs are really more of an afterthought anyway.  The biggest standout is probably the vocalist, as he rivals Corpsegrinder, Sean Killian, or the dude from Streetlight Manifesto in how insanely fast he delivers his lines.  The lyrics for any given song are basically a full chapter from any novel, and he just never lets up with his rhythmic staccato.  It's like Busta Rhymes joined Origin, listen to the intro of "Fathom Infinite Depth" and try not to be impressed by his full throatal assault.

And then the album finishes.  And that's it!  A-thibby thib-thit-thit THAT'S ALL FOLKS!

As soon as "Spontaneous Generation" draws to a close, the album evaporates from your memory like your last wet dream, leaving you only with a curious stain and no memory of why you were so damn excited.  For all of the mind-bending skill on display, Archspire is woefully lacking in staying power, with songwriting skill on par with Rings of Saturn or Brain Drill, despite managing to avoid their style of incessantly cramming six second snippets of practice exercises in a random order dozens of times and calling it a song.  When listening to The Lucid Collective, it's obvious that they know what they're doing, it's just a shame that they aren't particularly good at it.  There was a browser game from a few years ago where you'd create a band, get points every hour or so, and spend those points on improving the band, touring, releasing albums, writing songs, etc.  Fun little timekiller and all, and if I recall there was a strong roleplaying community with it, but the point was that there were three factors that influenced the overall rating of the songs you'd write: creativity, playing ability, and songwriting.  If Archspire played that game, they'd have creativity sitting at about 75, playing ability at 150, and songwriting at 20.

As instantly ear catching as tracks like "Fathom Infinite Depth" and "Lucid Collective Somnambulation" are, they have no staying power beyond their initial runtime, and it's a shame because in terms of skill the band is right on par with early Fleshgod.  Maybe this is just a sign of the declining popularity of Unique Leader and Willowtip styled tech death, or maybe it's just my own waning patience with bands who are loaded with technical skill but lacking in songwriting prowess, but Archspire could have been on top of the world back in 2008, but are struggling to reach an audience in 2015.  They have a bit going for them with the rapid fire insanity of the vocalist and some interesting themes (like their ode to "I Have No Mouth, and I Must Scream" in "The Plague of AM"), but unless they can fully utilize the ability to throw in some more hooks, stronger melodies that do more than just dazzle with flashiness, they're going to fade back into the white noise with Arkiak, Signal the Firing Squad, Viraemia, and the rest of the field that used to be a big deal that nobody cares about anymore since the advent of the dissonant, twisted, atmospheric OSDM explosion.  Archspire has a lot of skill, from a frantic bass player that manages to keep the music grounded instead of hopping on a trampoline and hoping everybody notices like Beyond Creation, to a blitzkrieg vocal assault from a deep throated lawn mower, but they need to buckle down and write songs with more strong, memorable moments before they reach any sort of echelon above "decent enough porn".