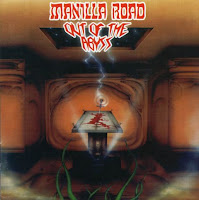 PS - Yeah, Mystification is probably a better album, but it's more revered at this point in time and the band doesn't seem to completely neglect it live, so to drive home the point that they're at their best when they riff like monkeys, Out of the Abyss is getting my keyboard love.
Posted by Bastardhead at 7:42 PM