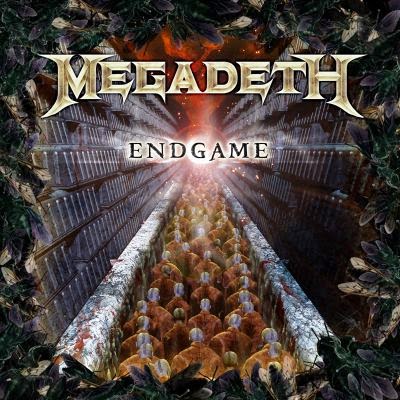 A Tale of Two Songs

One of the more visible falls from grace in metal history undoubtedly has to be that of Megadeth.  Everybody knows their history, everybody knows the relation to Metallica, everybody knows what I think of them (first five albums are great, Youthanasia is a decent hard rock album, everything else sucks), and everybody for the most part seems to agree.  It's just generally accepted that Megadeth has been shit since at least 1992.  It's really not even worth talking about, because it's all been talked to death.  That's why I'm sitting here, rocking out to Rust in Peace, with a blank document on my computer screen.  God dammit, I love their 1990 album more than almost everything, but it's so hard to review at this point.  Everybody has the same opinion!  Part of me wished they had at least one good album after Countdown to Extinction because then it'd at least make their career somewhat interesting instead of predictable and sad.

But BH!  There is a good album in the last two thirds of their career!  You're completely forgetting about Endgame!

No I'm not.  Endgame sucks, and you're all insane for not realizing it.  Really, this album is just an exercise is the exact kind of subliminal manipulation that Dave spends so much time ironically shouting at the top of his lungs about.  The only thing Endgame does well is order the tracklisting in such a way that you get tricked into thinking it's great.

What do I mean?  Well, ask anybody what their favorite song on this album is.  90% of the time it's "This Day We Fight", the other 10% says "Headcrusher".  There's a reason for this, because they're positioned in such a way, surrounded by exactly the right amounts of boring, half hearted bullshit, that they managed to stand above the crowd.  They're very good songs, the former of which is legitimately probably one of my top ten favorite Megadeth songs.  It's just does everything right, it's the exact kind of violent aggression intertwined with masterful guitar playing that made Rust in Peace such a timeless classic.  It never lets up, it starts with its foot on the gas and just plows through the listeners like zombies in a shopping mall.  The chorus deserves special mention for being so bloody ear catching.  The whole song is a rallying cry, a huge, pissed off anthem to remind everybody why Megadeth is a band worth listening to.  "Headcrusher" is no different, with a pummeling main riff and ferocious vocal patterns that just emanate bile and fire.  It's hard not to pump your fist and bang your head during "DEEEEATH BY THE HEEEEEADCRUSHA".  Both of these songs are exactly what made the band so fucking good in the 80s (yes Rust in Peace is an 80s album, the 80s ended in 1992).

But here's the secret, they're the -only- two good songs on the entire album.  It's so easy to miss because the beginning is so good that you find yourself just riding a high until "Headcrusher" comes in late, but it's true.  You see, Dave, for all the cross eyed tongue waggling lunacy, really can manage to be smart sometimes.  This is an example of his brilliance, because the beginning of the album emulates a previous classic in So Far, So Good, So What?, with "Dialectic Chaos" and "This Day We Fight" perfectly mirroring "Into the Lungs of Hell" and "Set the World Afire".  The intro tracks are both hugely melodic and triumphant sounding shredfests, with only basic riffs being made up for with instantly memorable Van Halen leads and mindbending fretboard theatrics.  The following songs are both big crowd rousing numbers with massive choruses and infectious-yet-punishing riffage.  At this point, after you just sat through albums with such timeless classics as "A Tout le Monde", "Of Mice and Men" and "Moto Psycho", you'll hear that one-two punch of an introduction and promptly pass out due to all of the blood rushing to your reproductive organs.  It's easy to forget that "44 Minutes" is the exact same awkward radio rock bullshit that plagued their 90s era, and it's forgivable to not notice that "Bite the Hand that Feeds" is almost a total rewrite of "Skin O' My Teeth" and "Bodies" is just "Symphony of Destruction" again.  It's okay to immediately erase the embarassingly terrible half-ballad of "The Hardest Part of Letting Go... Sealed with a Kiss" from your memory because just as soon as you start wondering what the fuck it was, "Headcrusher" starts and makes you headbang yourself into a concussive state of amnesia.

That's really what makes up the entire album.  Everything is either a blatant copying of a previous song that people already liked or it's just a new terrible idea that Dave has been unsuccessfully trying so fucking hard to make us like for a decade at the time of release.  I mean let's be real here, who really enjoys the spoken word crap and tinfoil chewing nonsense that Dave spends half of the title track shouting about?  Who really likes the awkward vocal cadences that have plagued the band ever since the early 90s?  Who thought "Captive Honour" was so good that we needed to hear it again with a new title?  I realize that a lot of the copied songs are songs from Countdown to Extinction, an album I openly enjoy the everloving shit out of despite its very obvious flaws.  The difference really comes down to how fresh the songs feel, and Endgame just can't even compare outside of the two obvious songs.  Countdown may have been an obvious attempt at cashing in on Metallica's new direction (and let's not pretend that "This Day We Fight" and "Headcrusher" aren't direct responses to the heavy throwback songs on Death Magnetic, but I really just can't bear to preach that obvious storyline any longer), but it was fun and exciting.  "The Right to Go Insane" just feels like a reheated leftover, and "1,320" sounds like a paint-by-numbers how-to guide in regards to being just mediocre enough to carry the momentum that a previously great track can generate.  Dave's snarl is just as lazy and tired as it has been for nearly two decades, excepting the two I keep namedropping.  In fact, I'm really beginning to suspect that a different, better band actually wrote those two, because holy shit it just makes no sense that he can crap out those two masterpieces in the middle of an album full of rehashed speed rock in the middle of a streak of albums that range from hilariously bad to painfully mediocre.

There are just only so many times I can say the same thing, so I'll wrap it up here.  "This Day We Fight" and "Headcrusher" are two phenomenal songs that absolutely deserve all the praise they've been getting, but the rest of the album contains nothing but bad reimaginings of better songs from their divisive transitional era.  I'm aware that everybody's taste is different, and maybe the majority of people really do just think "1,320" is really just that much better than "High Speed Dirt", but personally I'll never buy it.  Dave got a few things right by recognizing the best tracks and releasing one as a single and the other as the opening song, and also only focusing on politics for about half the songs instead of all of them.  But that's it, everything else is just as bad as they've always been and I feel like I'm the one sober guy staring at the Emperor's naked asshole.