Job for a Cowboy - Sun Eater 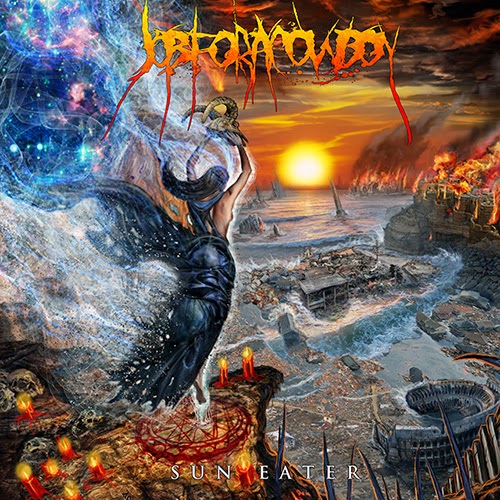 I find it so odd that a band that pretty much accidentally helped invent an entire subgenre of metal managed to then follow up that monumentally influential EP (Doom, for the younger than young of you out there) with release after release of blatant trend hopping.  I'm gonna come clean here, I can fairly safely say that I actually do like Job for a Cowboy, but I say that with the caveat that it's mostly due to their 2009 effort, Ruination.  To me, that's the one time where the trend they landed on managed to be one they were really, really good at.  Doom helped deathcore get its start, and it's mostly below average with a couple cool spots here and there, while Genesis saw them plunge headlong into complete, 100% unambiguous death metal, but at the same time saw them completely hollow and bland and not at all worth listening to.  Ruination is when they decided to get on the tech death bandwagon, and somehow they surprised the shit out of me by actually doing it quite well.  That whole album is full of riff after riff, constantly pummeling you from all directions, coupled with great songwriting and impressive instrumental performances all around.  Demonocracy was more of the same, but with weaker songwriting, but overall it's a decent, listenable album.

I ran through that to illustrate why 2014's Sun Eater was met with a collective eyeroll by so many people who are either non-fans or moderate fence sitters like me.  Once again, for the fourth time, they've undergone a drastic shift in style, and for the fourth time, it didn't seem natural.  There's almost never any flickers of what's to come to be found on any given Job for a Cowboy album, it's always just a really jarring transition to whatever happens to be popular at the time.  One time, sure.  Two times, okay, coincidence, I'll give you the benefit of the doubt.  But three or four times?  Come on man, how often do you expect to fool me?

In the end, that's really not all that important.  The end result is all that matters, right?  Well sure, but it's undoubtedly frustrating and is always a big black cloud looming over everything they touch.  I listen to Sun Eater and I just know in the back of my mind that this was done with scientific precision instead of artistic passion, and that's worrisome.  But again, let's try to push that aside, what does the music itself offer us?

Fucking dammit the style they tried to emulate this time is wanky prog death in the vein of Beyond Creation and The Faceless's newest direction, with touches of Between the Buried and Me for good measure.  Job for a Cowboy got the songwriting prowess down pat when they were trying to cram as many notes into any given song as possible, and Sun Eater proves that when they give songs space and try to go for more ethereal, twisted atmosphere, they just fall flat.  It's weird, because they're clearly still trying to throw in a bazillion notes, but it comes of as awkward and confused this time around.  The rhythm section is basically tweaking on meth, as the drums never slow down, even during the atmospheric parts, and the bass is... *ugh*, the bass is identical to what you'd find on a Beyond Creation album.  It's Overkill-level loud, very clear and broowwwdowdwooow.  Just like the Quebecois noodlers, the bass is super distracting and instead of complementing the guitars in any way, whether it be through syncopation or counterpoint or whatever, it just feels like it's desperately trying to elbow its way past the rest of the band into the spotlight.

I can give the album some credit for getting better as it goes along, since the first side is utterly forgettable before giving way to some shining moments in the back stretch.  "Encircled by Mirrors" and "Buried Monuments" both have some very standout guitar theatrics, to the point where they manage to overshadow the directionless noodling that fills the rest of the runtime.  "A Global Shift" definitely deserves a mention as well for being the only song not to fuck around with long instrumental passages where the drummer goes apeshit everywhere except for the snare and cymbals, giving the illusion that the pace is slower and more open.  Nah, that song throws all that progressive bullshit to the wind and just shreds the fuck out like Ruination did five years prior.  This is what Job for a Cowboy has already proven to be their strength, and they absolutely should just stick to songs like this.  Because "A Global Shift"?  This song works.  Absolutely worth listening to.

But of course, the rest of the album doesn't do that.  They're following in the footsteps of The Faceless with this one, as the longer, spacier passages ring several bells that ring strikingly similar to the likes of Opeth, albeit without the clean guitars or vocals.  Yeah, Sun Eater keeps it dirty and gritty, never succumbing to the allure of pleasant clean vocals or haunting acoustic passages.  Normally I'd praise a band for that, especially this one, since that illustrates that they're not trying to step outside of their bounds and they know exactly what they can and can't do.  But hell, I wish they'd just gone for it.  I mean why not, right?  That's the direction they're leaning, and we all know that by the next album they'll be playing straight up Dark Descent style dissonant gurgly jangledeath so it's not like they're ever going to expand upon this idea.  But really, the frustrating part isn't that the band didn't explore the ideas they were flirting with, it's mostly that they bothered with it at all.  I can compare this to plenty of bands but all roads lead to Beyond Creation.  I feel like The Aura was playing in constant loop in their rehearsal room, because it's such a dead ringer for that album.  It's a faceless clone of an album in a style that's been gaining traction, and once again Job for a Cowboy cements themselves firmly in the middle of the pack, not doing anything to stand out.

I've used a lot of words to basically say the same thing over and over (which in a way is kind of indicative of this album in the first place), but it's really the truth.  When you think of wanky prog death with Jaco Pastorious's zombie on bass, this is the exact thing you think of.  The songwriting never brings the songs over the edge, everything lurks right on the surface but never actually breaks through and makes itself known.  It's just anther fish in a school, another faceless nothing that wouldn't stand out at all if it weren't for the name attached to it.  For fans of Beyond Creation and The Faceless, this is right up your alley, you'll love it.  The rest of us?  Not so much.  A bunch of samey sounding proggy doodles doesn't make for a good time.  You know how whenever you see a band live, there's almost always at least one song that you just tune out for?  Somewhere in the middle of apparently every death metal band ever's set, there will be a song that the crowd just kinda checks out for.  Maybe the band likes it because it's a break from more demanding stuff, or they had a lot of fun writing/playing it, but it just doesn't connect with anybody in the audience.  This album is that song eight times.