Sodom - In War and Pieces 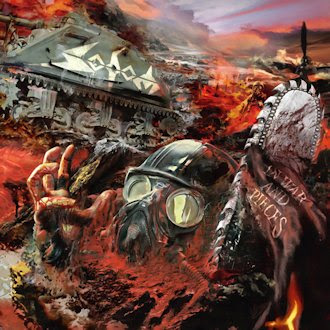 My apologies to Onkel Tom

I have a confession to make... I completely dropped the ball here.  A few weeks before the new year turned, I thought to myself "Well I plan on opening LotB with a best of section, are there any notable records I have yet to hear?".  It wasn't until after it was published that it dawned on me that I had somehow completely overlooked Sodom's latest offering, In War and Pieces.  For this, I have sliced out the vagina of the first attractive woman I saw after leaving the house this morning and mailed it to Angelripper in hopes that it pleases him enough to not kill me for my blunder.

The thing about Sodom is that they've had very few dips in their career.  Every time the Knarrenheinz resurfaces in the news, buttholes clench in preparation for the brutal rape that's down the pipeline.  Sure, Masquerade in Blood was a bit of a disappointment and their flirtations with punk on Get What You Deserve and 'Til Death Do Us Unite didn't sit well with some of the fans (though I personally thought they were still great), but most thrash bands are kind of allowed that stumble in the 90s.  It's one of those things that is just kind of understood and accepted as fact in the metal world.  Most thrash giants turned to suck in the 90s and black and death metal had to fill the gap.  But also like many of their brethren, Sodom once again harnessed the power they once held so triumphantly and began whipping merciless ass around the turn of the century.  This thundering monstrosity is a testament to what Sodom has always stood for musically: aggressive, vitriolic, and violent thrash intensity set against a backdrop of apocalyptic warfare.

Over the years, old Uncle Tom's voice has undergone a bit of a transformation.  The wear and tear of the extreme rasp he sported at the beginning of his career has obviously taken a huge toll on his vocal cords, as he now sounds reminiscent of fellow countryman and another corner of that famous Teutonic Thrash Triangle, Destruction's Schmier.  One of the words I can see people using to describe it would be "modern", but that's really an ill fitting term since "modern" doesn't actually mean a damn thing and it seems to be associated with metalcore yelling, which couldn't be further from the truth here.  Yes, it's a yell or a bark as opposed to a scream or a rasp nowadays, but it's still pure thrash, and it fits the blistering intensity of the music underneath to a T.  And speaking of the music, it certainly fucking delivers.  Sodom still hasn't slowed down since kind of regaining their swagger a little over a decade ago.  This shit is just punishing.  I wholeheartedly believe that if the production was stripped down to a late 80s thrash value, this could have been released no more than a year after Agent Orange and nobody would have been aware of the band's time traveling ability.  And that quality is something that many of the younger thrashers nowadays need to understand better.  Yeah, the 80s were a completely kick ass time for thrash metal, but instead of sounding like records you enjoyed from that era, you should try to sound like you could have been writing and performing alongside Exodus and Slayer instead of just ripping them off over and over again.  Sodom isn't trying to relive past glories with In War and Pieces, they're trying to just kick ass the only way they know how, and that is the way it should be.

I'll admit, like most Sodom records, this does tend to get a little bit samey in the middle, but it bothers me here less than on some other efforts.  "God Bless You" has a rather different feel to it than the rest of the record, starting off on a much calmer note and carrying a less violent and more heroic vibe to it.  "Knarrenheinz" borders on crossover thrash with its intense riffing, and the war march beat under the chorus to the title track just sounds brutal as hell.  There's no doubt that these guy still mean what they're playing, and it's just exhilarating to see a man nearly pushing 50 this energetic and youthful with his art. I don't want to compare Sodom to Destruction yet again, but they're really similar at this point in their careers.  After a shaky 90s campaign, they both release monstrous fan favorites in 2001 (M-16 and The Antichrist respectively) and have only marginally slowed down since then, released solid record after solid record and maintaining a youthful exuberance to help them stay relevant and ass kickingly great.

So once again, I sincerely apologize for my glaring oversight on my year end list.  If you wish to imagine it properly, imagine Hooded Menace shooting up to the number 7 spot (it's really grown on me), Misery Index getting bumped off, and Sodom sitting about the number 8 spot.