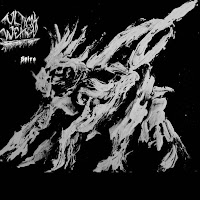 Go away
For this winter edition of the Diamhea Challenge, I am only going to be reviewing bands and albums that reference Final Fantasy in some way.  Why?  Because it's a stupid thing to do and I love doing stupid things.
So we're gonna start today with Ultima Weapon, one of Jared Moran's ten gazillion shitty half-hearted projects.  If you're unfamiliar with the guy, Moran is one of those special types of metalloids who has several dozen one-man-bands that all sound more or less the same, releasing new material under rotating names at an alarmingly high clip.  Sometimes they're a bit more grindy, sometimes they're a bit doomier, but I've stumbled across like eight of his projects over the years and each one reads the same.  It's lo-fi death metal with songs that sound like they were finished in a half hour and there's really nothing more you can say about them because that's all they are.  His output is functionally identical to Bob Macabre or Rogga Johansson if he didn't have any friends.
I walked into this with the intention of making stupid FF-nerd jokes about like "'Ronso Rage' sure is a fitting name since the main riff is a total copy of 'Liege of Inveracity' by Suffocation" and "This is probably such a weak release because they based it on the FFX version of Ultima Weapon, which is the shittiest one in the franchise", but once I realized this was a Moran band my mindframe completely shifted because who the fuck cares?  He's less a Weapon and more of a Mimic, because I thought I had blundered into a potential gem since it's so rare to hear metal based on videogames that aren't just straight up covers, but then I opened the chest and fuck it's the same shitty scratchy BDM he always pumps out.  It's a short eleven minute blast of mid-paced kinda-slammy death metal with no lasting impact shat out by a guy who has done this exact thing literally dozens of times.  There's only one sentence of musical description in this review because that's all it's worth and if you listen to it yourself you'll agree.
For good BDM that is super tangentially related to FF just stick to Jenovavirus.
RATING: X%
Posted by Bastardhead at 9:27 AM