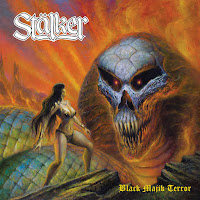 Playing skittles with the heads of the French Aristocracy
This year has been weird for everybody.  I'm not gonna pontificate on all the havoc wrought by covid and such because I'm sure you've all experienced your own unique hardships, but for the purposes of a music review blog, I found a pretty big shift in my listening habits.  That whole Relitigating High School series wasn't just a shelved idea that I resuscitated to cure writer's block, it's also just where my music listening habits were for most of the year, seeking comfort and security in a past that I know already happened and didn't kill me.  As a result, near the end of the year as I do my yearly scramble to listen to everything that might be worth considering for my year end list, I've found myself shifting away from the more grand meta way I've been looking at metal.  Less brainpower spent on "Does this philosophically clash with the presentation?  Is this doing anything truly new?  How does the context of the wider scene affect this album's impact?" and much more spent on adolescent surface-level stuff like "Do these riffs fucking rule?"  And that's what leads me to today's subject, New Zealand's Stalker (there's an umlaut in the name but my stupid english keyboard doesn't have a button for that so you'll have to deal).
Black Majik Terror is the band's sophomore album, but their debut completely slipped past me despite being my exact jam purely because 2017 was jam packed with raucous throwback speed metal and they just slipped through the cracks.  In a much less crowded year, Stalker has managed to jump out of the darkness and punch me in the face with a force akin to a coked out Butterbean.  Taking a more surface level approach to music lately has helped Black Majik Terror spring to the forefront of my listening cycles because this is some of the dumbest shit I've ever heard.  There isn't one single heady idea, no new interesting or creative twists on an old formula, nothing of the sort.  This is tried and true speed metal with obscene tempos, ludicrous soloing, and endless tuneless yelping but it's played with so much fucking gusto that I can't fault it one bit.  This is the Zapp Brannigan of speed metal - all CHA with zero INT.  Apart from the brief moments of respite in "Holocene's End" and "The Cross", this is forty unbroken minutes of straight ahead downhill pummeling.  It's actually kind of hard to talk about because that's really all there is to say.  Tracks like "Intruder" and "Of Steel and Fire" are loaded with so many riffs and screaming leads that there isn't any way to really dissect them without disorienting yourself.
This frantic lack of restraint calls to mind OG heavyweights like Agent Steel and Razor, and if you don't like Razor then when the fuck are you doing here?  The very nature of playing throwback speed metal gives them a pretty limited pool of influence to draw from, but I'd say they stack up against (and surpass) most of their contemporaries drinking the same juice like Ranger or Vulture.  I'd say they're most similar to Evil Invaders simply because they both ape Razor so hard, but in reality, the correct answer is Seax.  The big difference between the Kiwis and the Massholes is that charismatic intangible I mentioned earlier.  Both bands aim for pure speed above all else and include vocals that aim for raucous squawking and incoherently bizarre falsetto wailing, but Seax never really felt confident in doing so, instead just kinda imitating John Cyriis while being self conscious of how ridiculous it sounds, whereas Stalker's Dave King just strides out on stage with his cock fully out and makes eye contact with you while pointing directly at it while making noises somewhere between a deer mating call and Massacration.  It's so rad, I fucking love it.  It's the same reason I love Scanner's Hypertrace so much.  This kind of vocal approach lives and dies on the vocalist's ability to sell it.  In objective terms it sounds like ridiculous wailing, but in context and presentation it sounds like unhinged primal fury, and Stalker absolutely sells it.  I would trade my wedding ring for the vocal stems just so I can blast them out of my front window all day.
So yeah, Black Majik Terror is just pure speed and wailing and that's all there is to say about it, but conveniently that's all I want out of this style.  This is the exact opposite of "thinking man's metal" and I'm fuckin' here for it.
RATING: 88%
Posted by Bastardhead at 5:57 AM