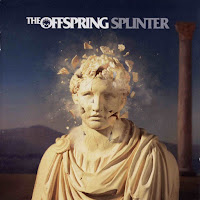 A Haole with heart

I don't know if I'm going to make this a yearly thing or not, but honestly I get real burned out around December nowadays.  I think it's because I've started running the AOTY poll over at the Metal Archives, and I find myself listening to metric fuckloads of metal for huge stretches of time while I sample most things that get voted for just out of curiosity.  The last few years this sort of reinvigorated me by discovering tons of great new shit, but this year?  I dunno man, I just need a break from metal for a bit I think.  I want to keep writing right now, and I'm pledging to pick up my production a bit, so I'm gonna christen January to be NON-METAL MONTH 2019.

I decided to kick this off with The Offspring, in particular their 2003 album, Splinter, for a couple reasons.  1) I want to illustrate how much of a fucking false I am since most of my non-metal listening is comprised of flagrantly not-metalhead-approved nonsense.  You won't find me listening to tons of prog rock or dungeon synth or goth rock/post-punk or synthwave or anything like that.  Nah, I'm more into poppy shit like this.  2) I chose Splinter specifically because The Offspring is one of my all time favorite bands, a band I've been in love with ever since I was a preschooler who first heard Smash waaaaaay back in 1994, and Splinter may not be their best album by any stretch, but I feel like it's the one that most wholly encapsulates their full career.

The Offspring has always been an incredibly frustrating band for me to like for one really obvious problem, and that's that their most well known songs are almost uniformly the worst shit they ever wrote.  Their Greatest Hits album has like two good songs on it, almost every single they release is guaranteed to be the worst song on whichever album it comes from.  It's true!  Casual fans of the band or people who hate them because they've picked up shit via osmosis probably associate them with total fucking garbage tunes because that's somehow what sells the best.  There are exceptions of course, Smash is good the whole way through (though "Self Esteem" is the least good song on display, don't fucking @ me) and Ixnay on the Hombre was kind of a weird fluke where the smash single, "Gone Away", is actually really great, and the other lesser known singles/videos like "I Choose", "Cool to Hate", and the other best-known track from that one, "All I Want" are all fantastic.  On the whole though?  They all suck.  Americana is terrible for this, containing pukefest pop songs like "She's Got Issues", "Why Don't You Get a Job?", and, most egregiously, "Pretty Fly for a White Guy".  "The Kids Aren't Alright" is the fluke good one, but the rest of the album contains loads of high speed bangers like "Staring at the Sun", "Walla Walla", "No Brakes", "The End of the Line", the title track, and (I swear I'm not making this up) an 8+ minute stoner rock jam in "Pay the Man".

It's those other songs that make The Offspring so damn fun for me, and it's the same with every album, from the raw and messy self titled debut all the way up to the mega glossy shit in the new millennium, every album is made up of at least 60% hybrid of Fat Wreck styled skate punk and straight up Bad Religion ripoffs.  And they're good at them!  Very good!  They may be the quintessential pop punk band behind Green Day but they constantly showcase legit punk rock talent that they love burying between stupid pop songs.

And that all leads me back to Splinter, because I think this one has the most stark contrast between their two styles.  It has the highest peaks of legit punk songs and the lowest valleys of terrible radio pop/rock.  For examples of the bad stuff, look no further than (of course) the lead single, "Hit That".  This one is just... oof.  That disco beat, that stupid synth line, the dumbass attempt at socially conscious lyrics in front of the most outwardly sonically goofy song they'd written to that point, just almost nothing works here.  The chorus hook isn't bad, but it's pretty incessant in how it drills in your head and just winds up being annoying.  "When You're In Prison" is just a joke song at the end of the album, an ode to teh funnay act of prison rape, but it comes off as pretty tone deaf and didn't age particularly well.  "Race Against Myself" is also just boring as fuck, proving for the nth time that The Offspring is just not all that good at more self-serious ballady tracks.  The less said about "The Worst Hangover Ever", the better.  Their attempts at ska have proven to be fun when it's quick upstrokes and skank beats like "What Happened to You" but this dumbass white boy reggae with infinity too many steel drums sucked on "Why Don't You Get a Job?" and it sucks here too when they subbed them for trumpets.

Well that's an awful lot of bad songs, why do I say this is a good album overall then?  Mostly because the rest of the album contains some of the best tracks they ever wrote.  As soon as the verse hits in "The Noose", they exemplify that other side of their identity that I love so much.  This is a high speed punk track that would've been right at home on any given Pennywise or NOFX album in the 90s.  This continues for pretty much every track I haven't already mentioned.  "Long Way Home" is basically a lost Bad Religion track circa No Control, the one-two punch of "Never Gonna Find Me" and "Lightning Rod" is one of the most surprisingly emotional and introspective suites they ever penned, backed by high speed aggressive punk rock like they're so good at doing despite their fondness of mainstream acceptance, and "Da Hui" is just a straight up 80s definition hardcore song, essentially just being The Offspring's interpretation of Black Flag.  Even the remaining radio friendly songs are good, with "Cant Get My Head Around You" being a textbook example of a great radio rock song with some fantastic hooks, and hell I even like the objectively stupid "Spare Me the Details".  There's no reason a dumb breezy margaritas-on-the-yacht song about getting cheated on should be so fun, but dammit I've listened to it a hundred times over the years and I'm sure I'll listen to it a hundred more.  Just like "Hit That", the song is centered entirely around the poppy hooks, but fuck it man it works somehow on this one.

So overall, Splinter is definitely a very dated album with some questionable lyrical choices and some of the worst songs the band would pen until the fucking anti-memetic SCP that is "Bumpin' in My Trunk" a decade later, but it also contains some of their most aggressive melodic hardcore tracks since their mostly forgotten debut from the 80s.  It's not their best album by any stretch of the imagination, but I'd argue it's the most definitive Offspring album purely for showing them at their best and worst, and how every album is worth a spin for fans of this style despite the warts inherent to their angle of attack.  The dumb throwaways like "The Worst Hangover Ever" and "When You're in Prison" can die in a fire but the heavier and meaner tracks like "Da Hui" and "Lightning Rod" are among the best the band ever penned.

This month isn't going to appeal to most of my readers, but if you want to understand how I tick, I'd recommend the aforementioned two tracks and "Long Way Home" to see why this band has been such a mainstay in my listening cycle for decades at this point.  And if you hate them, well then I'm sorry you hate fun, it must be a brutally miserable existence you lead.