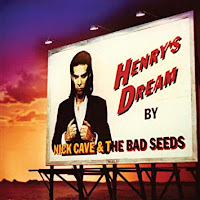 I know I said at the start of this month that part of the reason I was doing it was to shine a spotlight on stuff that's not nearly as universally metal-approved (because almost no metalheads only listen to metal, but they all do seem to listen to the same non-metal artists), but there are some areas where I'm just as cliche as the rest of them.  I'm a thrash fan who thinks Reign in Blood is untouchable, I think Rust in Peace is one of the closest things to a perfect album you'll ever find, I think Iron Maiden's first seven albums are the stuff of legends, and, like all metalloids, I fucking love Nick Cave and the Bad Seeds.

One thing most fans seem to agree on is that Cave has had an astoundingly consistent career, from the debut up to whatever is the most recent at the time, the man has somehow never released a dud.  I agree in a sense.  I don't love every album, but I do recognize that he's never really had an obvious misstep.  Each and every album is distinctly Cave, no matter what kind of mood or approach the group is taking.  My personal "golden age" for the group spans from Tender Prey to The Boatman's Call, and my favorite album overall shifts semi-regularly between this six album stretch, but the usual (and current) champion is what we're going to be talking about today.

Henry's Dream is one of the definitive Cave albums to me, and I realize now that I haven't even mentioned offhand what genre this all takes place in.  Frankly, I'm not sure I could accurately describe it.  Everywhere I look tends to just lump the group into "post-punk", but considering I'm only really familiar with that family tree via the more gothy stuff like Sisters of Mercy and Bauhaus, that doesn't seem entirely correct.  I feel like "post punk" works if you don't take it too literally, kinda like how post rock has fuck all in common with rock music besides the instruments they play.  Nick Cave and the Bad Seeds is post punk in the sense that it exists in some alternate timeline where punk definitively died out and music as a whole just spun off in a super weird direction.  No three-chord riffs, no d-beats, no tuneless yelling, not even a distorted guitar, none of the things you'd usually think to associate with punk rock.  It's at this point that I realize I'm trying to show why post punk isn't punk rock as if there's anybody reading this who doesn't already know the difference, and actually anybody reading this is probably a Cave fan who wants to see how badly I fuck it up, so uhh.... hey guys.

Anyway, the point is that Henry's Dream was heavily inspired by Nick's time in the slums of Brazil, and it shows.  He was inspired by the beggars and buskers he'd find along the dusty alleyways, and as a result the album sounds very... well I'll just let the man himself explain it.  As he said in a Rolling Stone interview:


"They'd get their acoustic guitars with one or two strings and bang away and make a racket that had no sense whatsoever. It was very violent and seemed to come straight out of the heart. Very unmusical."


That sums up a good 60% of the album right there.  Tracks like "I Had a Dream, Joe", "Jack the Ripper", "John Finn's Wife", and especially "Papa Won't Leave You, Henry" sound exactly like that.  There's a very unmusical style of melody going on here, and it's all very violent and cacophonous, but at the same time it all comes together in such a way that implies there was no other way these songs could've ever possibly sounded.  Cave's narrative style of lyrical storytelling is a big reason why.  His intoxicatingly smooth baritone carries the listener through these tales of lust, death, and faith in a way that sounds comforting and soothing despite the din of steel clangs and crashes surrounding you.  Everything he says sounds just so fucking cool, he could read me my grocery list and I'd be entranced.  He's a veritable Dracula Elvis, forever sauntering through a smokey cabaret, permanently smouldering cigarette nestled between his fingers, clutching the microphone tenderly while he looks everybody in the eyes at the same time and regales them all with dark tales across the emotional spectrum.  From the tender "Loom of the Land" to the raucous "John Finn's Wife", Cave always has a way to make the words leap out of the song.  I've mentioned a hundred times that, as a metal guy, I don't really care about lyrics all that much, but Cave has a gift for colorful language that's both bizarre and forceful and makes it very easy to recall almost entire tracks' worth of lyric sheets after one half-listen.  Even lines that haven't particularly aged well after 1992 like "I woke so drunk and full of rage that I could hardly speak / A fag in a whalebone corset draping his dick across my cheek" just work perfectly. Is that coming from a place of deep seated homophobia?  Who knows!  He's so good at getting into character and telling you weird stories of wet lipped women with greasy fists and women with legs like scissors and butcher's knives that the latent misogyny of like 80% of his female characters being succubi or deceivers doesn't set off any alarm bells.  He's an odd, mysterious traveler out of time who has seen a lot of shit and he's here to tell you all about it over a carton of Marlboro Reds and soundtrack of twisted, broken steel guitars.

I've sat here with this document open and mostly blank for the better part of a week trying to put into words exactly what kind of weird thing Henry's Dream truly is, and I just... can't really.  I'm letting myself down a bit because this is the one album I got to during Non Metal Month that I truly do adore and here I am completely failing to explain why or even what it is in the first place.  It's weird, melancholic violence and horniness filtered through discordant consonance and venomous crooning.  Maybe I could've chosen a different album, one like The Good Son which focuses more on tender piano ballads and gives guitarist Blixa Bargeld more of a shining role with his sonorous voice on "The Weeping Song" or Let Love In which is a bit easier on the ears and has some of his most well known tracks like "Loverman" and "Red Right Hand".  But no, I wanted Henry's Dream because it's my favorite, and I realize that I bit off more than I can chew and probably crapped out one of the worst reviews I've penned in ages.  In a way it's kind of fitting.  It's simultaneously bone-chilling and heartwarming when it flops between inspiring spirituality of "Loom of the Land" or "Christina the Astonishing" and the noisy, crash-bang lullabies from hell like "Papa Won't Leave You, Henry" and "Jack the Ripper" and it just kinda short-circuits my brain and leaves me with a smile behind dead eyes.  Just... I dunno, start on the first track and see if it pulls you in.  If it doesn't, I can't fault you.  Not everybody can appreciate the madness of an undead punk dandy.