Winds of Plague - Blood of My Enemy 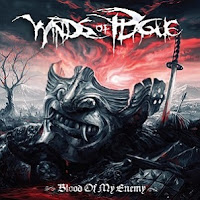 I've found myself oddly attracted to Adrienne Cowan lately.  No no, I don't mean like I'm stalking her or anything, just that I've found her presence on otherwise bland records to be really welcome.  Light & Shade is a fairly bland power/pop metal band but her wild shrieking that she punctuates nearly every song with quite liberally in stark contrast to her otherwise sweet voice helped give the album a bit of an identity.  Her main band, Seven Spires, is interesting but tends to whiff on execution, with their full length debut this year, Solveig, making the bizarre choice of rerecording the entire earlier EP and sticking it at the front of the album, creating a weird and disjointed experience that starts off underdeveloped and suddenly shifts into a decently okay Kamelot album at the halfway point when the new songs finally start.  The worthy thruline within that experience is once again Cowan, with her soft coos contrasting wonderfully with her insane Doroisms.  She has real personality in her voice, and it helps these otherwise middling albums become quite listenable.  She's looking in line to be the next Jorn Lande; a great vocalist who constantly finds himself in boring bands that he almost single handedly saves from being worthless with alarming regularity.  I feel like I'll be following her career at least mildly attentively in the near future.  I wonder if she's got anything else in the pipeline?

*checks her artist profile on MA*

OH GOD SHE'S IN WINDS OF PLAGUE NOW WHY GOD WHY WOULD YOU DO THIS??

*socks blow across the room*

So in all honesty, I thought Winds of Plague was dead at this point.  I was reviewing their discography as it was released a few years ago out of some sense of odd fascination/obligation, but by the time Resistance rolled around I just couldn't bring myself to give a shit.  That one was a lame hardcore album with synths popping in occasionally, if nothing else I give them credit for finally picking a style and sticking to it, it just wound up being the one they're the worst at.  After this the band went quiet and just disappeared from my radar completely.  So now four years have passed and the entire lineup has been replaced apart from the vocalist, and Blood of My Enemy has quietly dropped, and it's... kinda good?

This band pisses me off so much, they seemingly can't nail down their strengths for the life of them, but this is their second album now (the other being The Great Stone War) that actually manages to be fairly solid despite their ever present songwriting woes.  Instead of the endless idiotic genre hopping marred by some of the worst lyrics ever penned, this one focuses mostly on epic atmosphere with chugging melodeath riffs helping things along without being intrusively stupid.  The main strength of Blood of My Enemy is simply that it's not awful, which is admittedly a pretty terrible benchmark to work towards.  You can get the gist of the album after the first track, "Nameless Walker".  It starts of with some killer blast beats and punctuated keys, sounding exactly like the kind of band I always wished they'd become, but near the end it just devolves into slow non-riffs with sweeping keys over the top with gang shouts piercing through occasionally.  That's what most of the album is, slow non-riffs with needless keys.  They're back to trying to do everything at once, though not nearly as sloppily as they were on Decimate the Weak.  So you get a band trying to be epic through the lens of hardcore, which just a completely different approach to how metal does it, and it ends up being wonky and stupid most of the time.  The gang shouts and brochoirs are just out of place and weird every time they show up.  Even weirder is that, paradoxically, they sorta fit perfectly, because no other style of vocal would fit there.  It's just kind of a testament to how they're still peddling a style that just fundamentally doesn't work.

I lead into this talking about Cowan, but she really doesn't have any real effect on the band beyond a short vocal spot in the title track.  In fact, I don't know if any of them do, because it was almost entirely the same band that released The Great Stone War, the one oddly okay one, in between all the terrible albums.  Every last one of them has been replaced barring ol' Johnny, and yet here we are reverting back to the sound of an album that was already notably different.  This boils down to me assuming that, throughout everything, he must be The Guy behind the band, and whichever sound they decide to focus on depends entirely on what kind of mood he's in come writing time.  As a result, even though this focuses on atmosphere more than any others, there are still some straggling hardcore-isms.  The most notable offender is "5150", which is basically a random ass Slipknot song shoehorned into the album, and "Dark Waters" and "Snakeskin" do the same thing in spots, with the former finally giving way to the kind of massive dumbass breakdown the band is so fond of and did such a good job of holding back from throughout the album's runtime.

Overall it's just... odd and disjointed, which has always been the band's problem, but it's a little bit more cohesive here.  It's best summed up as The Great Stone War with more chugs and less melodeath.  Which doesn't sound great, and in truth it's really not, it's just middling and forgettable.  For most bands this is almost worse than just being flat out bad, but with Winds of Plague it's actually commendable for how remarkably awful their worst albums are.  When it comes to this band, a weak and forgettable release is a huge step up from an actively annoying trainwreck.  So they've failceeded once again.  Congratulations?