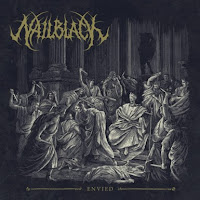 Painted fingernails are so edgy

Black/thrash is an easy style to get right, but a hard style to make interesting.  Ohio's Nailblack are a good example of this phenomenon, because their debut, Envied, checks all the boxes that makes the style worthwhile without being exceptional in any way.  Cycling through mid paced thrash beats, slightly more uptempo d beats, and high octane blasting, this is pretty much the definite example of a redundant release.

The band's biggest mistake is simply that they don't go for the throat all the time, because they're definitely at their best when they put the pedal to the floor and just tear out at full throttle.  Tracks like "The Wolf" and "Another Holy War" are ripping riff fests that satiate the unwashed thrasher in all of us, but don't stick around for long afterwards, while "Promises" and "Step Into Infinity" just stroll on by with no consequence, opting for more churning mid paced tempos and a few feeble attempts at acoustic atmosphere.  When they're at their least interesting, aping cliches the hardest, they're at their most enjoyable.  Nailblack are the type of band that's really frustrating to listen to and critique, because there's nothing inept about them or this release, it's just the kind of thing that doesn't need to exist when D666 is still around, ya know?  They have everything a fan of the style needs: trebly production, raspy and throaty screams, subtle sense of sinister melody within simplistic riffs that are basically one part German thrash and one part Swedish BM (more on the thrash side, natch), it's just that none of it is particularly engaging.  It's about on par with any random no-name release you can find on Hells Headbangers.  There's nothing particularly wrong with Nailblack, but I can guarantee you I won't be coming back for another round once this review is published.