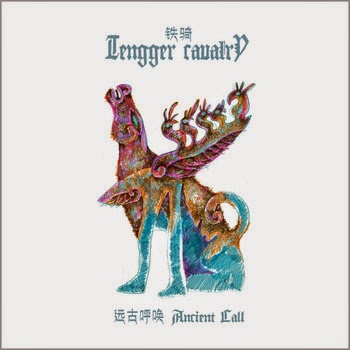 They call me Guan Yinping, The Shit Wrecker

So China is pretty underrepresented in the grand scheme of things when it comes to the wonderful world of heavy metal.  I'm not even kidding when I say that the only two bands I can think of right now are The Nine Treasures and the subject of today's rambling, Tengger Cavalry.  Lord knows why, but I do know that traditional Chinese music is god damned gorgeous and I could listen to those silly horsey fiddles all day and never get tired of them.  And while I'm in the region, you know what else is awesome?  Mongolian throat singing.  You know that thing where you open your throat wide enough to choke on a coffee can and then moan like a mixture of Popeye and one of those guitars you'd make in grade school out of a tissue box, cardboard tube, and rubber band?  Yeah, that shit sounds awesomely ethereal.

Boy oh boy do I wish that these three things were all somehow related!

Okay, that's the most hamfisted intro I've ever fisted, but I've got not other way to lead into the thesis of this review; that being that Tengger Cavalry is probably the freshest and most interesting band out there right now.  And really and truly, all they're doing is just writing songs for the Dynasty Warriors games.  Really, longtime readers of mine have probably noticed that I've namedropped the DW4 soundtrack more than a few times, and that's because it's full of legitimately great heavy metal and hard rock songs with smatterings of traditional Chinese instrumentation over them, and it becomes instantly memorable with those twangy, flittery melodies permeating through your skull.  Tengger Cavalry does that exact same thing, except they push every limit while doing it.  All the songs are faster, heavier, catchier, or more endlessly hummable.  Nature Zhang is kind of an oddball character (follow the band on Facebook and you'll see as many pictures of him dressing up in traditional Mongolian garb, hanging out with sheep, and talking about My Little Pony as you will actual updates regarding the band), but he filters his mad genius through the lens of simplistic extreme metal adorned with the cultural acoustic instruments that are clearly so important to him.

Folk metal in general tends to either put the folk elements at the forefront and just back it with distorted guitars (like Korpiklaani or Finntroll), or just be regular metal with some folky keyboard patch accentuating some melody (like Northland or certain Ensiferum songs), and if Tengger Cavalry here leaned to either side, it's definitely the former, but don't be alarmed, there's clearly a shitload more thought put into "Battle Song from Far Away" than "Trollhammaren".  The strength in Tengger's songs is most definitely the interplay between the guitars and the folk instruments (mainly the dombra and the horse head fiddle).  At any given time, all three of these instruments will be playing, and they will all be playing off each other brilliantly.  Nothing is used as a gimmick, there's a huge amount of restraint when it comes to flaunting the folky side of the band.  The throat singing and the acoustic twanging you'll hear over the deep chugs and double bass all work together as one cohesive beast in a way that still stuns me to this day.

One thing about Ancient Call that kind of put me off was the fact that it really didn't grab me on first listen like The Expedition did last year.  My first run through this ended with me saying "Well that was more of the same.  I guess 'Hymn of the Earth' had a really cool melody but the rest of it didn't do much for me".  Then a month later it became "Well 'Brave' was really high octane and energetic, and 'Summon the Warrior' was just crushing and epic as fuck, so they've got a couple song stretch in the middle that's really good but the rest of it is disappointing".  Which later became "Okay dammit just this whole thing rules".  I hate it when people try to sell an album as it being a grower.  No, damn you, I shouldn't have to listen to something I don't like several times before I like it, that's just like winning a battle via sheer attrition, but Tengger pulled it off somehow with Ancient Call.  Remember how I mentioned that Powerwolf kept making the same album over and over again and I was cool with it because I really liked their sound before I finally got sick of it on Preachers of the Night?  Tengger Cavalry is basically still in the middle of that slack zone, because this is essentially a carbon copy of The Expedition, but I couldn't care less.  I fell absurdly in love with that album, naming it my AOTY for 2013, so of course I wanted more of it.  Nature Zhang delivered exactly that, and I couldn't be happier for that.

There's a surprising amount of variety here too, with "Galloping Towards the Great Land" and "Brave" being absolute rippers that you'd need to be physically restrained to keep from headbanging to, and "Summon the Warrior" just rides on this low, pummeling groove that sounds like the musical manifestation of a Mongol war march.  If I think about it, actually every single song utilizes a classic galloping riff in some incarnation.  It makes complete sense with the theme of mother earth and horses and whatever the hell else Nature goes on about most of the time, but there's a very earthen, animal spirit vibe going throughout everything, so the fact that the music itself tries to manifest itself as such is only natural.  The closing track, "Legend on Horseback" is also this monstrous epic, with grand sweeping atmosphere over extremely grounded riffing and lively melodies.  That really could sum up every song if you wanted to get super simplistic about it.  I'll be the first to admit that you could trade half of the songs on this album and the previous and it'd be very hard to tell which ones were moved, but it ends up not mattering much because the quality of these songs are so staggeringly high, regardless of the fact that we've already heard them before.

Basically I'm just completely in love with this fucking band.  Every single melody hits bullseye, they're all very lively and flowing across very simple (yet effective) riffing.  The simplicity is part of the reason I fell for the previous album so hard, and Ancient Call just carries that tradition flawlessly.  There's no need for showboating or flashy bombast, Tengger Cavalry instead just keeps everything where it needs to be.  If you watch Kitchen Nightmares, you'll surely see that every episode involves Gordon Ramsay saying that the restaurant's menu is too complicated, so he always shaves it down to just a handful of items, and that's what Tengger Cavalry does.  They walked into folk metal, saw all these twangy instruments and bands with twenty fiddle players and said "Guys what are you doing?  Just get a metal band and supplement it with one or two folk instruments and keep your songs focused on what's important: good songwriting".  Then they set up shop (well, Nature set up shop, this didn't become a full band until a few albums in) and just proceeded to show every single shitty band how it's done.