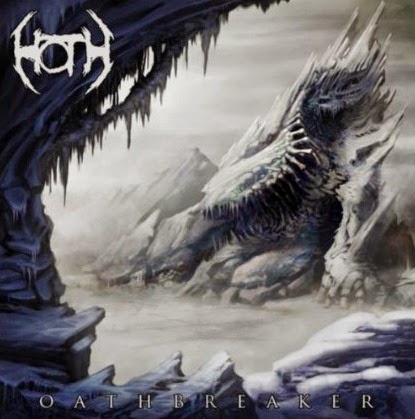 I look for love in Alderaan places

Hey BH! Your ragepost about Jari Maenpaa got a lot of circulation around the internet! It showed up on Reddit and MetalSucks even wrote about it! It became the most viewed page on your blog by a longshot within one day! How are you gonna follow that up? Another response to Jari's second cry?

Hoth here is a band I checked out for all the most obvious reasons.  I mean come on, look at their logo!  Clearly, these dudes didn't give a fuck about taking themselves too particularly seriously.  If you wanted to name your band something that brought to mind dead, frigid landscapes, Hoth isn't a bad choice.  It's an icy wasteland from a well known fantasy universe, it's not uncommon for metal.  But then shaping your logo like a fucking Tie-Fighter??  Oh hell yeah, let's rock this shit.  Let's have some fun and play some god damned metal, yo!

And that's where I was wrong, because this is played straight as an arrow, with all the dead eyed seriousness of a veteran soldier.  And you know what?  It fits fucking perfectly.  I suppose the darkness of the Star Wars universe has kind of been downplayed in my memory, because for some reason I couldn't possibly imagine this theme being anything other than bombastic and silly.  Apparently The Phantom Menace is all I can recall on a whim.  Fucking trash tainting the classics and yadda yadda this isn't about that.  The point is that Oathbreaker is an incredibly mature album for having such a massive scale to it.

What I mean is that there's a stunning amount of tastefulness and craftsmanship to be found in the songwriting.  The music is put against the backdrop of fighting Robot Jesus, Lord of the Space Gestapo and all of the songs are pretty long (nothing is shorter than five and a half minutes), but the two dudes in the band manage to do the same thing that Gotsu Totsu Kotsu does so well; they keep the songs simple and let them grow organically rather than meticulously structure and orchestrate their direction.  They keep everything grounded and focused instead of just throwing a bunch of shit at the listener in some futile hope of conveying some epic atmosphere.  It's hard to explain but it's something that seems so obvious to me when I hear it.  There are actually a fairly wide variety of styles on display, and none of them ever feel forced or awkward.  You're gonna think I'm crazy, but hear me out on this... Hoth reminds me a lot of Ensiferum.

Stop laughing, I can explain.  Yes, the band is listed everywhere as "melodic death/black metal", and that's not wrong, but the melodies that permeate the foreground of the whole record sound straight out of Markus Toivenen's book.  Ensiferum helped make folk metal popular by blending it with power metal instead of black metal like most bands at the time did (and still do), which gave it a hugely bombastic nature that few bands were really championing back in 2001.  Hoth take that folk/power metal blend of Ensiferum and put it back in a black metal template, if that makes any sense.  Melodic black metal is probably the easiest way to describe what's happening on Oathbreaker, but if you wanted to touch on every genre that makes a prominent appearance, you'd have to say something ridiculous like "Epic Melodic Technical Progressive Atmospheric Black/Death/Thrash/Folk Metal".  There are a shitload of ideas at play here, and they almost all hit bullseye.  Each track seems to have at least one lead melody that carries the song throughout most of the duration, and each and every last one of them runs the risk of getting stuck on loop in your head for days at a time.  And underneath that melodic forefront, you can have songs like "A Blighted Hope" that take a merry melody and twist it into something sorrowful and depressing before throwing it over a very bouncy and triumphant rhythm, completely changing the mood and theme of that melody without changing a note of it.  Contrast that with songs like "Unending Power" that are so visceral and punishing that it could easily be mistaken for a Skeletonwitch song.

The smorgasbord of stylings on display would mean nothing if the songwriting itself didn't also rule, and of course, it does.  It's hard to really put into words, but I touched on it a bit earlier.  Everything about this just feels organic and well thought out.  The songs are all structurally interesting, never falling into trenches of repetition, and even though every song has at least one extended clean section, they never feel obligatory or needless.  It's just... this is the only place the song could have logically gone from here, so that's where it went.  There's really not a whole lot to complain about here, Oathbreaker is a very solid album that takes vast swaths of several different styles of extreme metal and manages to tie them all coherently together with strong melodies.  I mean, the riffing is pretty decent and the drumming is excellent, but it's really the melodies that make the album worth listening to.  It's impressive how they manage to make it seem like so much is going on while keeping everything simple and never overdoing layers upon layers of bullshit like many bands are prone to doing.  Just listen to the fucking thing already, I pinky promise it's super good.