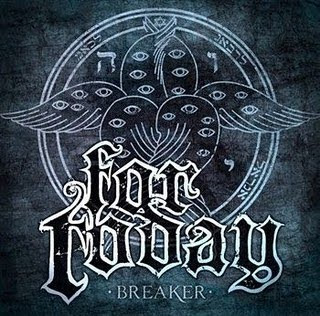 In my latest review for everybody's favorite lost symphonic brocore goons, Winds of Plague, I mentioned that I'm a pretty decent sized fan of Sioux City, Iowa's For Today.  Now, for some, this probably came as somewhat of a shock considering I'm such a refined beacon of extreme metal supremacy, one wouldn't necessarily assume by my chiseled good looks and flowing, Ross Dolan-esque locks that I have a taste for Christian tardcore.  Yet here I stand behind a band of extended earlobes clutching tightly to their rosaries while scolding me for getting boners.

Before I get to Breaker, allow me to address that the band is flawed on a conceptual level.  What I mean is that they aren't a band for the right reasons.  I realize the notion of correctness is a subjective concept, but when a band just up and admits in interviews that "we don't do this because we love music, we do this because we love God and we want to bring Him to everybody, to let everybody become one with Him" or something to that effect, I get a bad taste in my mouth.  By basically admitting that their music is nothing but a vehicle for their religious propaganda, they've rightly earned a fair bit of criticism by actual music fans from all sects of belief, because who the fuck does that?  Mercyful Fate had a grand ol' time singing about Satan and had a huge interest in the theological beliefs of satanism, but at the end of the day they were still there to make some great, ass kicking heavy metal and holy shit did they ever deliver.  Where For Today fails is that their music takes a back seat to their message, which admittedly earns them guaranteed fans (Christian metalcore runs rampant with the same circle-jerk back-patting that NSBM does, giving unearned praise to mediocre bands purely for having the "right" message) but harms the music at its core.

With all that said, Breaker is the album where it is harmed the least.  This IS just a vehicle, don't get me wrong, and while it isn't the '67 Corvette Stingray of Mercyful Fate, it's still akin to an '81 Pontiac Grand Prix with a ceiling that's falling off, bald tires, and a bum carburetor that's prone to stalling at odd times.  Yeah it's not the greatest thing out there but it's personal, it has character.  For Today writes functional music for the style, and it generally works well (there are some things about Ekklesia and Immortal that fail too hard for me though), and the whole package comes together the strongest on their 2010 effort, Breaker.  It's produced in a very typical, dry, metalcore way, but there isn't anything particularly wrong with it.  And if you really pick apart the songs, there's nothing entirely special about the way they're written.  They follow tried and true formulas, busting out the clean vocals and the breakdowns exactly when you expect them to, but there's an undefinable quality about the album itself that makes the unadventurousness seem bearable, even enjoyable at several moments.

For example, the first proper track, "Devastator", is probably my favorite metalcore song written in the last several years.  The buildup works magnificently, with the vocalist's strong declaration to Hell and how many wedgies he's going to give it, really feeling like a man possessed, pounding toms and a dissonant buzz perfectly complementing his anger and conviction, letting you know that some serious shit is about to go down.  And when it finally releases, it lives up to its own hype and just rips the place apart.  The middle section with the gang shouts of "TEAR IT TO THE GROUND!", culminating in a crushing breakdown pretty much sums up the entire album in a nutshell.  What this album undeniably does not lack, in any measure, no matter how prejudiced you are against the style or the ideology, is aggression.  For Today is fucking pissed about how many people have turned their backs on God, and how strong of an influence the Devil has in today's world, and on this album they just fucking explode.  Despite my earlier claims of the band clinging too tightly to their faith in order to write anything particularly creative, their passion seeps through in more than abundant enough quantities.  I feel the anger and frustration of the band, I feel how much they care for the greater good in the clean vocal passages, I feel how furious they are with the current state of affairs in the fast and technical sections, I feel how badly they want to punish who they perceive as wrongdoers in their... well, punishing breakdowns.  Tracks like "Seraphim" and "White Flag"  pull all of the qualities together in a frankly masterful fashion that I wish other non-musically motivated bands would take note of.  The extramusical qualities of the songs shine in a fashion nearly as strong as Strapping Young Lad's City, and that is one hell of a bold claim to make.

I can't ramble on forever since this, while being exceptionally passionate, is still metalcore.  Musically it's something you've heard a million times before and probably hated a million times harder than that.  But out of all those millions of things, nobody has really actually managed to make me buy in to what they were selling with quite as much conviction as For Today has.  The impressively technical percussion, the occasional melodic overtones, the skull stomping breakdowns, the emotional purity of the vocals, just everything comes together in a very well done whole.  The album suffers a bit from the running theme of whoever The Breaker is, as his poems serve as decent interludes and help split up the album into distinguishable acts, but the pieces themselves are kind of lame and passive.  Plus the album kind of peters out at the end, with the last set of proper songs being pretty inconsequential.  With all that said, and my admittedly bipolar praise/criticism of the album aside, if you ever find yourself with an itch for big, stupid brocore on a moral high horse, look no further than Breaker.

Email ThisBlogThis!Share to TwitterShare to FacebookShare to Pinterest
Labels: Metalcore