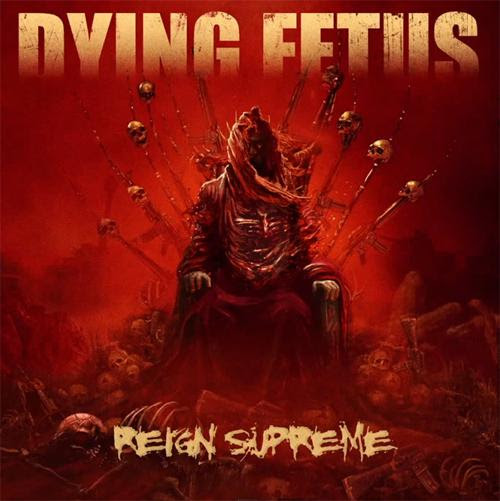 This will be yet another short one, but the reason behind that is just DYING FETUS.  My brain has pretty much been pummeled to a pulp here, Reign Supreme ranks as the band's best offering since Stop at Nothing nearly a decade ago.  DYING FETUS.  Just FUCKING.  DYING FETUS.

Years ago, my buddy went to a show Dying Fetus was playing, I don't even think they were the headliner, but when he came back, for about two weeks the only words out of his mouth were DYING FETUS.  He'd try to explain how crushing they were, but he'd get like three words into a sentence before just yelling FUCKING DYING FETUS.  He was a fan before, but after witnessing them live he just broke, and that's currently what's happening to me right here.  Just, everything is right with this album.  Despite having a few tracks being obviously stronger than others, ("From Womb to Waste", "Second Skin", "In the Trenches", and "Revisionist Past" are my favorites), there are no dull spots.  Old school fans of the band should love this, as the aggression has been kicked up to a notch not seen in nine years, and while they aren't as prominent as they used to be, there is no shortage of the signature chugging sections and hardcore influences.  There's more blasting and traditional death metal riffing this time around as opposed to just flip flopping between sweepydoodling and neanderthal stomps, though both of those traits are here in force.  Reign Supreme basically took me by complete surprise and grabbed me by the balls in a way I had not found sexual since... well since Cannibal Corpse released Torture a few months ago, but still.... FUCKING DYING FETUS.