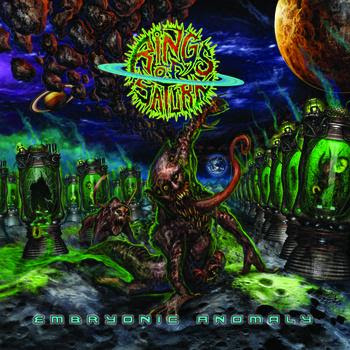 Can we agree to just forget about this, please?

I'm tempted to just copy and paste my Brain Drill review for a third time here (a trick that surprisingly not one single person called me on, shame on you all), but I'd rather not overdo one of my gimmicks like I'm so prone to doing.  But really, every problem I have with the merry band of Californian sodomites is amplified here to a level I thought unimaginable.  The technicality isn't even impressive at this point, it's so in your face and unabashed that there's nothing to marvel at anymore.  When every percussive instance is part of a blast beat and every guitar note is part of a breakdown or sweeping section, there's just nothing to impress anymore.  It's akin to an exploitation film beginning with an incestuous rape scene that climaxes with Bigfoot barging into the room and jerking off on a corpse before shitting on the victim and eating them both, but then the movie ends with the main character just being stabbed.  Sorry, a sword to the sternum isn't all that shocking when compared to the sheer insanity of the hypothetical opening scene, and that's what Embryonic Anomaly really is.  The first few seconds off the album feature intense sweeping and other assorted fretboard noodlings before degenerating into a cliche breakdown.  This formula repeats itself over and over and over and over again throughout the album and the only different element that gets introduced later is some lame keyboard effect that bangs out a chord or two occasionally.

The problem I touched on when reviewing Origin is present here to a degree, and that's that there is so much going on that it's hard to take it all in and really digest it.  The main problem is that Rings of Saturn throws exclusively piles of shit at you, so it's hard to even WANT to take it all in.  There are two things you're gonna get, excessive weedly weedly noises and ultra distorted chugdowns, and the band isn't very good at writing either.  The noodly parts aren't even Weedling as much as they are Beedrilling themselves into your brain and absolutely refusing to back off.  I bet the waveform looks like a brick wall.  There's no variety despite there being a bazillion different notes being played each track, there's no way to differentiate which song is which since each sweepy doodle, each breakdown, and even each occasionally real riff sounds exactly like each one that came before it.  I'm having trouble even describing this shit in detail because there aren't any details to analyze.  Everything is to be taken at face value, which isn't much to gawk at.

There are a few common praises that I just have to dispel here, both regarding the sound of the album.  One is how the pristine production for once completely adds to the album.  This is legitimately bullshit because the sound isn't all that clean.  Sure, it isn't muddy, but I don't have to be smothered in wet dirt to need a shower.  Does everybody remember the uproar that Death Magnetic caused with it's insanely compressed production?  The same fucking thing is here, 100% exactly the same.  There is audible clipping and horrid oversaturation throughout the whole deal, it's torture for the ears.  Even if the album was well written, I'd still have trouble listening to it because it's akin to having a brick shoved into your ear for 35 minutes.  The other issue I have is how this was heralded as being very "spacey", which is the descriptor that made me interested in checking the band out in the first place.  Let's get something straight, Space Invaders is NOT spacey.  A bunch of high pitched beeps and boops is not spacey in the least fucking bit, it sounds "electronic" or "technological" or "malfunctioning".  Space is a vast, infinitely desolate place, larger than any human mind can conceive and overwhelmingly devoid of life.  Fucking Wormphlegm is spacier than this and they sound like they're recording in the center of the Earth.  Even if you don't take the desolate approach to space and instead look at it as a majestic canvas which we can project our wildest imaginations upon, this is still an utter failure as it feels manufactured in every way.  Every bit of this noodly mess is completely calculated and meticulously designed to fit this ridiculous tech-deathcore template.  I know space and science seem to go hand in hand, but outer space is about as organic as you can get.  There is virtually nothing man made in the great expanse of nothingness, and yet people consistently associate this entirely unnatural and manufactured mess of an album with it.

Would you stare at a strobe light for 35 minutes straight?  If so, then Embryonic Anomaly is definitely for you.  It's just a flashy trick being done over and over again for the whole album and very rarely gets interesting.  Rings of Saturn disappoints the hell out of me because on a purely technical level, these kids have some real skills for their age (I think the guitarist only recently grew hair on his testicles or something).  It's just upsetting that their songwriting skills aren't nearly as mature and developed as their ability to move their fingers incredibly fast.  "Corpses Thrown Across the Sky" and "Final Abhorrent Dream" actually have pretty good riffs in the middle of them, and the beginning of "Seized and Devoured" sounds like I just beat a level in Sonic 2, but otherwise there's nothing of interest.  Lame, predictable music for the average, droolingly stupid tech death fan.