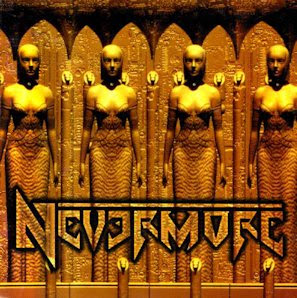 Confessions of a Former Fanboy - Vol. I: Secret of the Ooze

Well folks, it’s been years, but it’s high time for another review series of mine. This time, across the next seven reviews, we’ll be learning about, dissecting, and overall critiquing the music of one of the bigger names in metal and the owner of one of the most rabid and headstrong fanbases on the planet. If you’re reading this at all, you already know that the band in question is the mightily dubious modern-progressive-groove-whirlygig metal band from the land of Starbucks and grunge, Nevermore.

Before I get to the meat, I want to preface this with a quick explanation of the series title and my motivation behind this. When I was 12 years old, I heard my first Nevermore song (“I, Voyager” from Enemies of Reality, if you were curious), and was blown away. This was the perfect time for me to discover the band, as my nu metal phase had passed and I had gotten back into real metal, but I still couldn’t quite wrap my head around extreme metal and frankly couldn’t stand listening to anything too abrasive.  This was easy on the ears that couldn’t handle the cacophony of death or black metal, but was still heavy and undeniably metal while retaining melody and accessibility.  The main draw for me was actually Loomis’ solos. I was a young bassist but guitar theatrics always interested and impressed me, and it’s hard to deny the man’s skills. Everything fell into place at the perfect time, there was no other band I could have discovered at that time that could have interested me as much as Nevermore did.  From ages 12 through 16, Nevermore was always within the top 3 of my favorite bands, and many times claimed the top spot.  I won’t claim that my taste “improved” over time, but it certainly changed.  I really got into Mercyful Fate and other classics, Gamma Ray to help introduce me to power metal, Children of Bodom as a gateway to basically anything heavier than Death Angel, and others. My musical taste branched in so many directions that Nevermore ended up neglected and malnourished.  Now, several years later, I’ve gone back and revisited the band’s catalog.  The years and intrepid exploration of music coupled with my analytical experience as a once popular critic have forced me to see the band differently. Perhaps it’s all perspective, maybe the kids can see something that the jaded veterans can’t, but I’ve made the transition from one of those raving fanboys to one of those hard-to-impress cynics who made a name for himself by comparing Wolf to lasagna.  Since I’ve undergone this change, I feel I’m qualified to really detail the inner workings of the band as I have several years’ experience within the ranks of the surreally loyal fanboys.

Now, I won’t spend too much time delving into the history, since nobody reads the reviews to learn where the members grew up.  Therefore, I’ll just come right out and say this, Nevermore’s self titled debut is worlds different from what they have become known for.  Is this difference a positive or negative thing?  I suppose if you were introduced to the band through Dead Heart onwards, it’s a bad thing.  Apart from Loomis’s fiery leadwork, there is a much more simplistic approach to songwriting on this record.  The issue is that a lot of times the songwriting… well just plain blows.  Take the opener, “What Tomorrow Knows”.  The first track on your debut album, to me, should really define what your band is about and not only set the tone for the album, but the band itself. If Nevermore agrees with me, they give the impression that their band is all about driving one boring, not catchy, uninteresting riff into the ground for about six minutes longer than necessary.  Even when I considered myself a shameless promoter of the band, I never really “got” this song.  It just kind of happens, there are some guitars and vocals and some other noises but none of it means anything.

This brings me to a point of contention amongst haters and a controversial topic in general whenever the band is discussed, Warrel Dane.  Fanboys are IN LOVE with Dane’s lyrics and seriously, this man is probably the most overrated lyricist on the planet.  He drifts in and out between laughably pretentious and bat shit crazy.  His metaphors are either painfully obvious and delivered with a subtlety akin to Scrubs or make absolutely no fucking sense.  Check the chorus for “Godmoney” for an example.

Send your money to Jesus Christ
Mail order your eternal life
Bend your mind, make you turn around
Don't believe it when they tell you
That even god needs money
God needs money from you

There really wasn’t a more eloquent way to put that?  For a band that seems to pride itself on intricacy and a fanbase that endlessly slobbers over the virtuosic ability of each and every member, that is painfully stupid.  I whole heartedly believe that Dane writes shitty poetry and then tries to tack it on to whatever song the real musicians are writing.  There are tons of times in where the vocals completely distract the listener with just how poorly they fit with the music underneath, but there are better examples later down the road, so I’ll save the remainder of this point for later.

All this blabbering about Dane has yet to even touch on his main contribution to the band, his actual voice.  As a fanboy, I loved it.  It was unique, it fit with the music, there was nobody like him, he dared to actually sing as opposed to scream at a time when all these different kinds of abrasive styles were taking the market by storm.  Now that I’ve grown up and listened to thousands more bands, I really have a hard time stomaching his incessant warbling.  I’ve heard claims that he was classically trained as an opera singer, but if that’s the case I understand completely why he ended up in a complicated groove band from the asshole of Seattle.  There are plenty of instances where an over the top vocalist has worked marvelously, Messiah Marcolin sounds (and looks) like he was kicked off of the Broadway rendition of The Rocky Horror Picture Show on Ice for being too ridiculous, but find me a guy who thinks his work with Candlemass sucks and I’ll show you a guy who is in dire need of an ass kicking.  Mr. Dane here, on the other hand, is fucking annoying.  He always sounds like he’s projecting too hard, straining his voice, swapping between high and low registers at totally inappropriate times, and warbling out of key.  His work with Sanctuary shows that the man carries an absolutely killer falsetto, but it’s used so sparingly with Nevermore that he may as well have just said “Fuck it, I have one legitimate talent and I think it’d be awesome to squander it, just because I’m a douchebag”.  His performance on this debut is completely representative of everything to come.  The straying out of key, the bizarre and nonsensical fluctuations between stylings, and the straining/whining over either ridiculous and/or retarded lyrics, it’s all here.

Of the core group (Dane’s vocals, Loomis’s guitar, Sheppard’s bass, and William’s drumming), the former two get the most attention.  Dane for his inability to not raise my blood pressure, and Loomis for his fucking mindblowing guitar skills.  Seriously, he may look like the little girl from The Exorcist, but he is probably the most gifted guitarist in modern heavy metal.  His riffwork tends to fall flat about half the time, but give this guy a soloing section and tell him to have at it, and he’ll melt the faces off the Easter Island Heads.  He has a couple really noticeable sections here, particularly in “The Sanity Assassin” and “C.B.F.”.  I fully believe that this band is holding him back.  His solo project proved what he could do with a progressive metal premise and total control, and I really want to hear more of that.  Hearing him reduced to slightly complicated chugging patterns for the majority of a record is like Michael Romero playing in Machine Head, it’s fucking heartbreaking.

Fanboys call this album “diverse”, but I call it “disjointed”.  This is such a totally different style compared to what half the band did with Sanctuary beforehand.  Two words I’ve used a lot so far are “progressive” and “chugging”.  This surely brings one particularly popular Swedish band to mind, but let me assure you this sounds absolutely nothing like Meshuggah.  There is one thing that Nevermore is obsessed with that Meshuggah seems to be afraid to touch, and that is melody.  Many songs here kind of break down on themselves in order to cram a slower, half assed melodic section that barely fits with the rest of the song.  “Sea of Possibilities” is a great example.  The opening measures give the impression that it’s going to be a fast paced, thrash influenced piece reminiscent of the Sanctuary days, but by the time the chorus rolls around, it barely sounds like the same song anymore.  It turns into this slow, horrid attempt at being haunting and just ends up sounding stupid and ill fitting.  That songs stands as the closest they get to touching the brilliance of Refuge Denied, there’s a section near the end of “Timothy Leary” that carries a sweet USPM riff that could have been featured on the aforementioned album, but on the whole that song is a terrible exercise in meandering plod riffs, much like “What Tomorrow Knows”.  “The Sanity Assassin” and “The Hurting Words” stand as the two ballads, and while the former retains a slow pace, it manages to switch between a haunting acoustic verse and a legitimately crushing heavy section in the bridge that helps keep it interesting.  The latter on the other hand is an overlong, whiny, boring sack of clean guitars and awful lyrics.

Overall, it’s hard to rank their first outing as Nevermore amongst their later works.  This self titled album is really a wholly different beast in comparison to the progressivism and overindulgence their later records would come to exemplify.  On the whole though, it isn’t their worst, but it's close.  There are some truly terrible tracks here (“What Tomorrow Knows, “The Hurting Words”), but when they manage to hearken back to the Sanctuary days (“Sea of Possibilities”) or just focus on a nice groove (“Garden of Gray”), they aren’t all that bad.  Unfortunately, “aren’t all that bad” really isn’t “fantastically great”, and they spend most of the album sucking hardcore.  If somebody was looking to get into metal, progressive or otherwise, I’d never recommend this album.