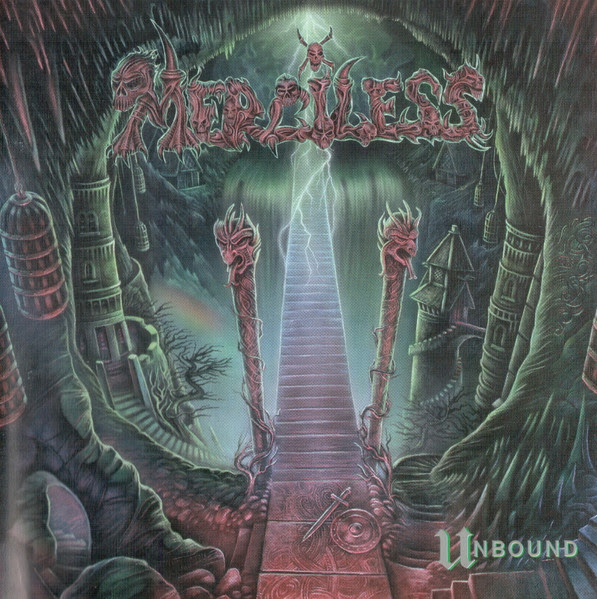 Their "I" is dotted with a Skulltula

I've been a metalhead for essentially my entire life (thanks, Mom), and yet somehow Sweden's Merciless managed to slip under my radar until recently. Being the first band signed to and bearing your name on the first release by Deathlike Silence records is a pretty big deal in the metal underground. That debut, The Awakening is known to be an early death/thrash classic. Those two points alone make it baffling that I hadn't managed to stumble across this band earlier. I'll admit, I've yet to hear that legendary debut, and this, Unbound, is my first foray into Merciless's sick, demented world. And frankly, I plan on pitching a tent and staying in this desolate, ravaged world for a while.

Frankly, this really early style of death metal is probably my favorite style of music, but it's also the hardest to review. I love the hell out of Massacra, Agressor, Messiah, Revenant, and the like, but I've yet to review any of it because I really don't know how to articulate my love. This primal death/thrash is the hot, popular cheerleader to my socially awkward and obsessed nerd. There's nothing wrong with it, I love every little thing about it. I have a small shrine in my closet dedicated to it. There are a dozen almost-gone candles surrounding a marble altar with Enjoy the Violence perched at the top. Yet every time I convince myself that this is the time, that this is my shot to prove I'm not a square and that I can be worthy, it just kicks the living shit out of me and I have to go back to my room and worship from afar, sniveling like the bitch it made me. Merciless, being early progenitors of this style, accomplish the ass kicking as well as any other band in the genre. Unbound leans towards the thrashier side of the death/thrash balance that I love so much, but it still manages to blend the razor sharp riffwork of thrash with the punchiness of death metal. It's this brutal equilibrium that makes this sound so fantastic, and even though this isn't quite as balanced as some of the other bands I've mentioned, it's without a doubt more than competent enough to brain the snot out of you for saying it's flawed as a result.

The main strength in Unbound is that it rarely lets up, but it still does let up occasionally to keep the album fresh. It starts with a soft, acoustic intro before bursting out into some early Kreator styled death/thrash riffage. Each song continues the main theme of razorpunching the listener with unrivaled aggression, while simultaneously weaving in a melodic twist. I don't know why, but Sweden seems to have some law forbidding anything musical from being mainly atonal. Now don't confuse my point, melody is important, no doubt, and this particular album benefits from it. It sounds like the kind of thing Deceased would go on to thrive off of. The mixture is rather top notch here, as the mix of raw aggression and subtle melody never sounds forced or awkward. Everything is part of one cohesive monster. The one flub seems to be the 8 minute beast in "Back to North". Halfway through the track, the song abruptly stops, and plays around with a quiet, haunting instrumental section. It's less than a minute long and really isn't intrusive, but it's the one time that the songwriting seems to wander a bit. Thankfully, Merciless never lose their focus again throughout the album. Rogga carries a fairly typical voice for the style, but it works fabulously. It isn't quite a death metal growl, it isn't a thrashy rasp, it isn't a throaty scream, it's some unholy mixture of the three. Imagine a thicker, deeper Mille Petrozza and you're pretty close to the mark.

Unbound is essentially a blueprint for this very specific style I have such a raging boner for, and as a result, it's well worth anybody's time. The dirty production and hard edged riffing compliment each other extraordinarily. Looking back, I find I haven't really been able to express what makes this album so damn good, and it's precisely why I typically stray away from writing about this style. It has to be heard, and you'll surely convert when you hear it. It's hard to explain simply through text what makes a riff awesome or a song memorable. All that really needs to be known is that apart from some confusing song structuring here and there, this album does basically everything right. From the churning of "Back to North", to the pure thrash insanity of "Nuclear Attack", the more traditional metal moments of "Lost Eternally", and supernatural quality of "The Land I Used to Walk", nothing is half assed or mediocre.